It is not fair to say ‘volcano has gone back to sleep,’ scientist says 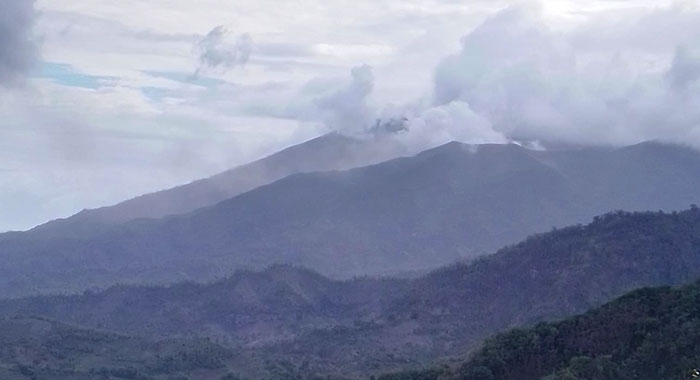 KINGSTOWN, St. Vincent (CMC) — One of the scientists monitoring the La Soufriere volcano said Monday that while there has been little seismic activity at the volcano in recent days, “we are not ready to say that the volcano has gone back to sleep as yet”.

Speaking on the state-owned NBC Radio, Roderick Stewart said there has been no signs of a reactivation or pressurisation at the volcano.

“So we think it is looking good,” he said, adding, “we will need to get a good look at the crater to work out what’s going on there exactly and we are not ready to say that the volcano has gone back to sleep yet, but it is definitely in a quieter stage than it was during all the explosions.”

The volcano erupted explosively on April 9 forcing the evacuation of thousands of people and according to the latest bulletin issued by the Seismic Research Centre (SRC) of the University of the West Indies (UWI), seismic activity at La Soufriere, has remained low since the tremor associated with the explosion and ash venting on April 22.

It said in the past 24 hours, only a few long-period, hybrid and volcano-tectonic earthquakes have been recorded and there was no further seismic tremor.

“The volcano continues to be in a state of unrest. Explosions with accompanying ash fall, of similar or larger magnitude to those that have already occurred in this eruption, can take place with little or no warning.

“Caution should be taken in traversing river valleys on the volcano due to the increased risk of lahars (mudflows) during periods of rainfall on the volcano. The volcano is at alert level RED,” the SRC added.

Stewart, who appeared on the radio programme with Prime Minister Ralph Gonsalves, said “fingers crossed” he is hoping that the volcano would remain quiet and “we would start getting back to normal.

“There are no tremors we are only getting the occasional small earthquakes,” he said, noting, however, that “one of the problems I have is that before the eruption we had a station near the summit and now we don’t have that it has been destroyed.

“We can’t directly compare the activities. So one of our tasks as soon as it is safe to do so will be to put the station back on line or put a new one in so that we can make a much better comparison between the activities now and the activities before…”

Stewart said while he was supportive that person who had been evacuated from the Orange Zone could return to the area, he would want it done under a government programme and away from the Red Zone.

“Yes I think we are at the stage where we can re-occupy the Orange Zone …but that has to be qualified by saying people should not be going into the (nearby) Red Zone unless it is for official purposes and sanctioned by the government.

“We have seen videos on line, we have seen posts on social media of people exploring in the Red Zone, people going hiking and this is utter foolishness. Deposits up there are … really hot underneath, they may appear cool on the surface but they are hundreds of degrees, maybe only a few feet down and you could sink into those deposits and you will suffer live threatening burns.”

Stewart warned of “so many hazards that could happen”, adding, “it is foolish for people to be in the Red Zone.

“So I think occupying the Orange Zone is good but ensure people are not doing any activities I the Red Zone unless they are sanctioned by the government”.

He said Georgetown, which is in the Red Zone, should not be among the communities that residents are allowed to re-enter.

“Georgetown was put in the Red Zone for a reason. There are hazards there and therefore we should not be doing activities in Georgetown,” he added.

2 replies on “It is not fair to say ‘volcano has gone back to sleep,’ scientist says”