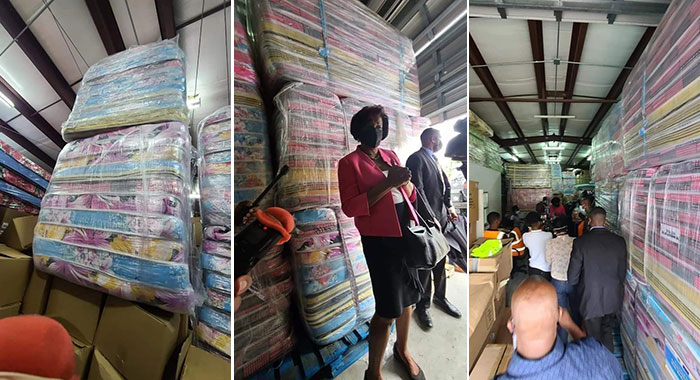 “The mattresses seen in the photos being circulated with the Governor General in the background were received late on Saturday, May 1 and are single mattresses which are being distributed upon request,” NEMO said in a press statement issued shortly before 11 p.m.

“Today’s delivery of mattresses was hampered by the inclement weather but efforts to distribute mattresses to those in need continues in earnest.”

There was uproar on social media, on Monday, after media accompanying Governor General Dame Susan Dougan on a tour, published photos of mattresses stacked at the NEMO warehouse.

Some netizens accused NEMO of hoarding the mattresses even as people displaced by the eruption of La Soufriere volcano were sleeping on sheets and makeshift beds on the floor in government-run shelters and private homes.

However, in its press statement, NEMO “categorically” denied allegations of hoarding of mattresses and presented what it said are the facts in the matter.

“Distribution of mattresses is an ongoing process,” NEMO said, adding that, to date, “some 1,500” mattresses have been delivered to the 86 shelters that have been activated.

“Initially, cots were supplied, but most of these have now been replaced,” NEMO said, adding that 550 mattresses were delivered to families over the past few days.

“A 40ft container of mattresses bought through the Ministry of Finance and Economic Planning was received on Friday, April 30, off loaded on Saturday, May 1 and delivered mainly to persons in private shelters,” NEMO said, adding that the weather affected further distribution on Monday.

“NEMO wishes to assure the public that it has no interest in withholding supplies necessary for the comfort of those who have been displaced due to the eruption of the La Soufriere Volcano. NEMO and its stakeholders will continue to coordinate the response to this national emergency in accordance with humanitarian principles.”