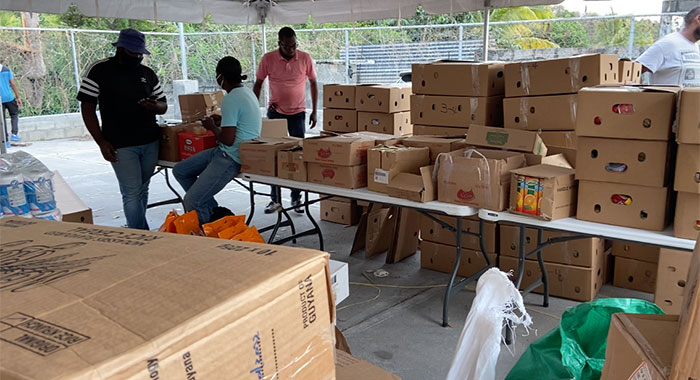 The Leader of the Opposition is urging the government to look into allegations of partisanship in the distribution of volcano relief items.

Godwin Friday’s comment came in a week that Prime Minister Ralph Gonsalves also urged persons handling the distributions to not give a food package to each of their family members.

The prime minister, in his comments on NBC Radio, on Tuesday, one day before Friday’s, did not say, however, that this was happening.

At a New Democratic Party (NDP) press conference on Wednesday, the opposition leader said there were reports of political partisanship being used to distribute aid to volcano victims.

He said that persons who are known to be NDP supporters have complained that they have been overlooked or have experienced delays in getting assistance while supporters of the ruling Unity Labour Party (ULP) have received aid.

“Given our recent history in which such was the case in giving out flood and hurricane relief, these reports must be taken seriously and must be investigated fully,” Friday said.

“Where they are found to be well-founded, steps must be taken to remove persons causing the problem and to ensure equity and transparency in the dispensing of aid.”

He said that the relief is not a political party matter nor is the aid from party resources.

He said that the aid is given to help the people most affected by the volcano disaster and must be distributed only on the basis of need.

“That must be the principal criteria upon which we determine who gets what.  No partisan consideration must be permitted to determine these questions. Where they exist, they need to be stamped out.

“We cannot have this as a repeating cycle in the recent history of this country when people all over the world are making sure that the people of St. Vincent and the Grenadines know that they are there to support them and that they will continue to do so going forward.”

He said it is of paramount importance “that this transparency be there, that the confidence of the donors be there so that they will continue to give long after the spotlight has shifted away from St. Vincent and the Grenadines.

“When the volcano goes into a more quiet phase, as it ultimately will, the need will still be there. We want to make sure that those persons who have donated in the past, who are thinking of donating now or in the future, that they will be still of that mind and the confidence to do so will come knowing that what they give will get to the people to whom they sent it, to whom they give it and that has to be very clear up front.”

He noted that three weeks have elapsed since the explosive eruption of the volcano.

“We have seen scenes of devastation in the north, where ash has covered, blanketed everything. That may seem like a heavy weight to carry now, but we must be committed to rebuilding when the volcano returns to rest and it is safe again to enter the danger zone.

“That is a commitment that we must give to the people from those communities that have been directly affected, where their hearts and their souls are committed to building lives in those communities.

“We must give them that assurance that we will be there to assist, to encourage and to make sure it gets done.”

The opposition leader said that having seen the devastation in the communities closest to the volcano, “it is clear to me that, even if there were no more explosive eruptions, it will take a long time to remove the ash, fix broken roofs and return people to their homes.

“Many of the people I have spoken with are hopeful for better but nevertheless, seem to accept the fate that they are going to be away from their homes for quite some time,” he said.

Meanwhile, Gonsalves said that he does not want to be getting text messages at 11 p.m. from people complaining that the distributors are only giving food packages to certain people.

“It is not so,” the prime minister said, adding, “people can’t bring all of these things to your doorstep. There is no machinery for that.”

He said that if one can text him with a complaint, they could also make a telephone call to inquire about where the distribution is taking place.

“At the same time, I want to advise those who are distributing to be fair and reasonable in all circumstances. If you are distributing packages, food packages, for heaven sake don’t go and give every member of your family a box of 25 or 30 pounds of food because it is not fair. There are other people who also need.”

6 replies on “Leaders urge fairness in distribution of volcano relief”