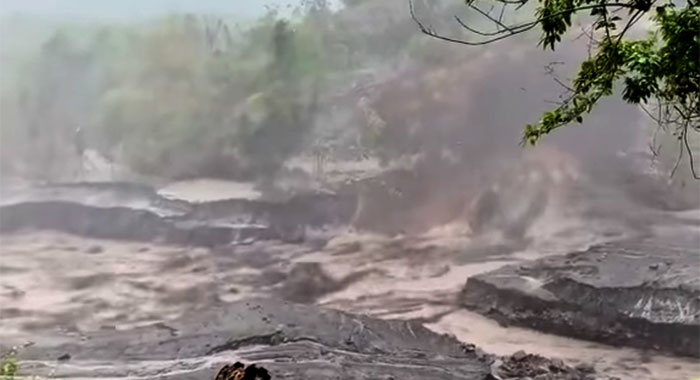 This screenshot from footage by Paul Cole – Plymouth University, shows a lahar in progress in St. Vincent on Monday.

KINGSTOWN, St. Vincent (CMC) — La Soufriere volcano has been displaying “spectacular” mudflows over the past 24 hours, but the scientists say the seismic activity has remained low since the tremor associated with the explosion and ash venting on April 22.

Seismologist Roderick Stewart, speaking on the state-owned NBC Radio, on Tuesday, said that the seismic network recorded signals from multiple lahars (mud flows) for a period of about six hours on Monday.

“The lahars seem to have been spectacular again and a couple of my colleagues were up there when it was happening and they said at one point there were boulders that were five meters in diameter, that is 15 feet diameter boulders, being rolled down by the lahars.

“It was taking trees down … and like the ones we saw last week Thursday … the steam was indicating that there was hot water in there. So they were very spectacular and very damaging,” he said, adding that the nearby rivers were flooded as a result.

The scientists said that the lahars most likely took place in all the valleys around La Soufriere with the most intense lahars occurring around midday on Monday.

Stewart said that measurements of the sulphur dioxide (SO2) flux at La Soufriere yielded an average SO2 flux of 1,036 tonnes per day.

Stewart said that the existing “quietude” at the volcano should not be used by persons to return en-masse to the disaster zones, adding “we have to be careful to what we refer to as quietude.

“Seismically, yes it is quiet, but we did a number of gas measurements on Monday and that is showing over a 1,000 tonnes of sulphur dioxide per day. That is a big number, so the volcano is seriously putting out gas and we really need to get a look into the crater to see exactly what’s going on.

“So until we get more information we will not be in position to say we can have a total relaxation. As we discussed yesterday, that doesn’t stop us allowing things into the Orange Zone. The Red Zone still has to be a no-go area,” he told radio listeners.

Stewart said while it is understandable that human beings would want to get back to their homes, a form of normalcy since the volcano erupted explosively on April 9, “we cannot rule out the possibility of more explosions happening.

“It could happen within a 24 hour period without warnings and that’s why we can’t do anything yet. We’re not going to predict when explosions will happen,” he said, adding that the emission of gases still occurring could be an indicator of activities within the volcano though there is no increased earthquakes and tremors.

“It indicates, and this is something we said quite a while, the vents … of this volcano is relatively open at the moment so the gas when it meets the magma at the depths and it is under pressure … and as it comes up, it comes up as solution and turns into a gas which is then vented.

“If there is any constriction or anything that de-gassing is usually accompanied by earthquakes,” he said, noting that in this present situation this is not the case “so that is indicating we got some sort of open vent situation which we think we have had for a considerable while.

“It could be trying to build a dome, we really don’t know and that’s why we need to have a look at it. But here are indicators it is still active and naturally we have to be cautious.”

Stewart said that unless the SO2 gas is reduced to less than 100 tonnes per day, there is still a need to closely monitor the volcano.

“So the levels we are have been getting are above what we would have expected if the volcano is going back to sleep,” Stewart said.

“We continue monitoring and we have our fingers crossed that the activities will continue to blow away,” he said.