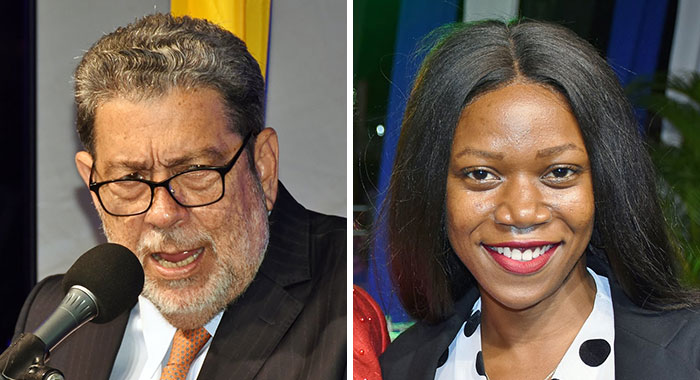 Senator Ashelle Morgan called Prime Minister Ralph Gonsalves after the April 13 incident in Diamond Estate where she is said to have been present when a man was shot in his left leg at his home.

Prime Minister Ralph Gonsalves disclosed this on the state-owned NBC Radio on Tuesday, as he urged persons not to accept “the allegations of one person as being the truth”.

Businessman Cornelius John, 60, of Diamond Estate says that Morgan, who is also a lawyer, and two other men came to his house and one of the men shot him after a verbal exchange.

One of the two men who were present along with Morgan at the time of the shooting is said to be Assistant Director of Public Prosecution, Karim Nelson.

Gonsalves is Minister of National Security and Legal Affairs and is also political leader of the Unity Labour Party, in whose government Morgan is a senator.

In his comments on radio, he said that “this thing which has been making the rounds about Senator Morgan and the Assistant DPP, Mr. Nelson” is not something that he is going to comment about “simply because there is an investigation on-going as the Commissioner of Police has stated publicly”.

“How does anyone expect the prime minister to make a public comment about allegations made by someone in relation to someone else which is a subject of a police investigation? I just want to ask that simple question.

“And I want to ask this second question: why do you take the allegations of one person as being the truth? And people running with it and talking about it as though it is the unvarnished truth and the unvarnished facts.

“I hope, for their sake, they don’t run into problems with the law of defamation. Why do people think that everything has to be hung out to be dry in the public place when an investigation is going on?”

“I have spoken to Senator Morgan. When the incident occurred, you’d expect that she would call and she would tell me.  And what I have read in the newspapers and heard persons talk about, without going into any details, that from what I was told, people just keep their mouths shut a bit.

He suggested that the response of some commenters would have been different were someone from the opposition New Democratic Party involved.

“If the shoe were on the other foot and it was an NDP woman, an NDP parliamentarian or high party member who had gotten involved in this, you know how the story was going to spin?

“‘So what you expect? There are two women. In this country, there is a lot of violence against women and it is good thing to see somebody is standing up to defend women’,” the prime minister said.

“But, now, it becomes all kinds of pejorative words being used to describe somebody. Just wait. You notice how careful I am? I am not pronouncing on something which is under investigation and I would be irresponsible to do so in a circumstance like this.

It was not clear who are the “two women” that the prime minister was talking about.

John told iWitness News that he complained about his wife and Morgan visiting emergency shelters even as he had needed his wife to assist him on their farm on the day that the shooting occurred.

He said that he and his wife have been living apart in separate houses nearby each other since December, after an incident involving one of their children but that they were still working together.

John said that he had not had any altercations or exchange of words with anyone on the day of the shooting and that he was shot in his patio, after he called out to the trio who he saw in his yard.

John’s wife, Nicole John, told iWitness News, via telephone, on Wednesday, that John is “supposed to be” her husband.

Asked if her husband had had any confrontation on April 13, Mrs John said, “Actually, not to my knowing. That’s all I have to say.”

Asked how she felt about that fact that her husband was shot, she said, “How I feel? Why you ask such a question? I don’t want to be interviewed, please.”