Hope amid the food fears 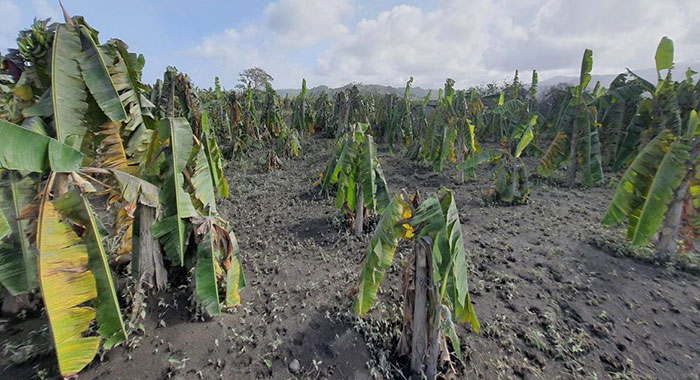 At the height of La Soufriere’s explosive events, there was muted elation in Trinidad and Tobago when an unlikely shipment of dasheen from St Vincent and the Grenadines (SVG) reached Port of Spain.

Up to that point, production and export lines seemed to function despite the humanitarian crisis facing the archipelagic island state, following April’s eruption of La Soufriere, and continuing volcanic convulsions.

However, experts have explained that the potential for a countrywide food shortage is growing rapidly and could affect the country’s food and nutrition security as well as their trading relationships with countries like Trinidad and Tobago, Barbados, British Virgin Islands (BVI) and Grenada.

Vincentian farmer and Chief Coordinator for the Eastern Caribbean Trading Agriculture and Development Organisation (ECTAD Caribbean), Jethro Greene, explained that due to the damage in the island’s Red Zone — lands closest to the volcano – production has been greatly reduced.

Greene advised that the country would need to scale up production in the Green Zone — lands least affected by the ash fall — in order to offset the shortfall of food available locally as well as for export.

“Most of the vegetables in Red and Orange Zone, over 90 % of the crop, has been destroyed because the ash fall was very heavy, in some places as high as four feet,” he said.

“The roots, tubers, the mature ones would survive, we can still get a crop from them but the young ones, the leaves are damaged … so what you’re going to have is a chronic shortage of food in the next couple months.”

“We may get one or two shipments out before the price climbs up tremendously because of the shortage.”

In terms of major trading partners, the bulk of agricultural trade from St Vincent and the Grenadines is conducted with Barbados and Trinidad and Tobago for products like ginger, sweet potatoes, coconuts, tannia, yam and dasheen. The country had also recently developed a successful livestock trade with Grenada. Lost revenue from these islands will amount to millions of dollars per week.

Steve Maximay, an agricultural consultant who is currently based in Grenada and who has worked extensively within the St Vincent and the Grenadines’ agricultural sector, also outlined the “major setback” to the industry with the damage to medical cannabis grown on the island.

“There has been a lot of interest in medicinal cannabis and significant growth of that crop as it was being marshalled into an industry.”

Arlington Chesney, former director of regional operations for the InterAmerican Institute for Agriculture (IICA) and subsequently, Executive Director of the Caribbean Agricultural Research and Development Institute (CARDI), expressed a need for immediate as well as continued regional collaboration during the crisis.

“At this early stage, there is the need to secure food for the local population,” he said. This is where trading partners should come in. It should be through grants where possible or sources of funds that will not impact on the coffers of St Vincent and the Grenadines.”

Maximay emphasised that there is incredible empathy for what the Windward Island state is going through and regional partners are positioning themselves to contribute to the local food supply and scale up their production in order to fill the gaps that have arisen.

“In Grenada, there is an understanding and appreciation of the fact that there will be shortages from St Vincent and the Grenadines which the local farming population has to either raise their game to support local demand and to be able to donate to their brothers and sisters in SVG.

“So there now has to be two-tiered production schemes to ramp up production to ship to SVG and satisfy local demands.”

However, Maximay expressed concern at what will happen in the future. “After every disaster there is always that immediate outpouring of support,” he said. “What concerns me is what happens four months after the event. Will SVG go back to the same two or three crops for export?”

Grenada’s Agriculture Minister, Peter David, also acknowledged the pending food shortage in the Caribbean region and confirmed that Grenada is placing itself in a position to “reduce the impact of the fallout.”

In fact, it has been reported that Barbados and Trinidad and Tobago have already enquired with that country’s Marketing and National Importing Board (MNIB) about acquiring fresh produce from Grenada.

Regional partners and other sympathetic territories including Trinidad and Tobago, Suriname, Venezuela, Cuba, Dominica, and Barbados have stepped up in the immediate aftermath of the crisis, sending shipments of fruits and vegetables to SVG.

The eruption of the La Soufriere volcano also comes amidst the COVID-19 pandemic, a recent dengue outbreak, as well as the worst drought in more than 70 years.

An 80% reduction in rainfall coupled with the COVID-19 protocols, which affected the routine of farmers and traders, caused a decline in agricultural production and trading.

However, according to Finance Minister Camillo Gonsalves, it is the agricultural industry which safeguarded the SVG economy from the levels of contraction felt by other regional territories more dependent on tourism.

“Last year, the agriculture sector was an important reason that the Vincentian economy did not contract in the same manner as some of our neighbours,” Gonsalves said. “Even in the face of a devastating drought and drastically reduced export markets brought about by regional lockdowns, agriculture proved to be a mainstay in sustaining employment and economic activity.”

Chesney also raised concerns of rising unemployment within the agricultural sector as well as the need to establish safety nets to safeguard the country during the upcoming phases of rebuilding and restoration within a stressful economic environment.

“The GDP is about EC$2.2 billion about which agriculture contributes 40%. Since most of the farmers are self-employed, there will also be an immediate increase in the level of unemployment. Agriculture employs about 20% of the entire workforce,” he said.

From a population of 110,000, over 15,000 people have been displaced. Some estimated place it at 20,000. These citizens have either been evacuated, entered state shelters, or moved in with relatives in the safe zones. At this point, the main priority is to take care of the local population by furnishing them with food and water, mitigate the spread of COVID-19 especially within shelters, and to ensure the general health of the people is maintained.

Greene outlined one of ECTAD’s current missions as working “with small farm families in the safe zones to increase their productivity and hence the production of local nutritious food in an attempt to fill gaps in supply with safety as a top priority.”

“The Government has also reiterated the need for safety nets which would include the buying of produce from farmers and distributing to less privileged families, but we are trying to encourage if we could get people to increase production, use their backyards, if we could increase production by 20-40 %, it will offset some of the potential shortfall,” he added.

Maximay also confirmed this need to ensure the nutritional integrity of the population.

“There are a number of families that weren’t resident in the Red Zone that have people with them, so they have additional mouths to feed so it’s not only the people in the shelters you need to take care of,” he said.

“I think there is going to be a need for a serious nutrition council operation where, when you request aid, especially food aid, we ensure we have nutritious items coming in. We want to be sure that we limit the amount of empty calories, for example from sugary drinks and make sure that the food is nutritionally balanced with the correct portions of carbohydrates, proteins, vitamins, etcetera.”

Maximay went on to point out the need for bulk raw water for washing and sanitation as well as potable water for cooking and drinking. This will be needed to supplement the water supply provided by the national authorities.

Greene, Chesney and Maximay all stressed the need for local and regional cooperation as well as a plan for rebuilding a more productive, resilient, and sustainable agricultural sector given the opportunity to reset the system.

“The country needs to look to trading partners like Guyana, Suriname and Dominica where the agricultural sector is still dominant, so they may have some excess to meet the needs of St Vincent and the Grenadines,” Chesney advised.

“There is the need for action at the national and regional level to see how SVG can have a composition of nutritional food from the Region until they can achieve food and nutritional self-sufficiency,” he added.

“Gradually, perhaps in about a year and a half or so, we will see a reduction in the importation of these commodities that can be readily grown in SVG,” Chesney said. “Within the second phase, they can look at exporting to traditional markets like Trinidad and Tobago (and) the British Virgin Islands.”

Planning this, the former CARDI head said, “must include actors at all segments along the various value chains. It must be a total national programme. It must clearly identify the commodities which would target certain markets. However, it will take a great deal of organisation to achieve this. Monitoring and evaluation is also critical as to how the plan will be successfully implemented.”

Locally, the government has given support to the agricultural sector during the pandemic and has promised to continue to support the sector in 2021 through buying local produce amongst other interventions.

In 2020, 5,000 farmers received US$370 in COVID-19 and Drought Relief totalling US$1.85 million. Farmers also received monetary support for sacks of fertiliser, livestock and to clear and cultivate land. Fifty-two additional loans were disbursed by the Farmer’s Support Company totalling US$32,000. The government also purchased 500,000 pounds of arrowroot starch which cost US$550,000 and gave over US$250,000 to the Arrowroot Association.

While the crisis has provided an opportunity to reset the system, Greene expressed the need for leadership by the farming sector in such a circumstance.

“What actually has to be reset is the mentality and attitude towards agriculture,” he said. “Up to a few years ago we were laughed at with people asking, ‘You still in agriculture?’ For this to work you have to allow farmers to produce, give them the tools to produce, also leave them to profitable margins and give them national respect.”

Maximay also advised on the appraisal of aid mandates, where certain expertise is tied to the aid, expertise which might not always be applicable or appropriate for the particularly unique circumstance of St Vincent and the Grenadines.

“In the interim, we have to double production in the Green Zone,” Greene said. “We have put out appeals to donors and individuals to help us and we need to address the medium to long terms concerns about getting food production going. We could build up a small animal revolving bank where we get a number of small animals so when people are ready to go back into the zone, you could give them an animal to take back.”

At this point, the hurricane season is two months away and according to Greene, it is a cause for major concern.

“Aside from the impact of the strong winds, with the eruption of the volcano, what comes out, it builds up a lot of mass and the bigger danger we will face, when rain comes during hurricane season is mudslides that can destroy villages and cause loss of life,” he said.

Though St Vincent and the Grenadines is in the midst of multiple crises, the experts generally agree that these circumstances can be seen as a way to rebuild a better agricultural sector that could contribute significantly to reducing unemployment, address national inequity at individual and community levels, and enhance GDP.

One reply on “Hope amid the food fears”