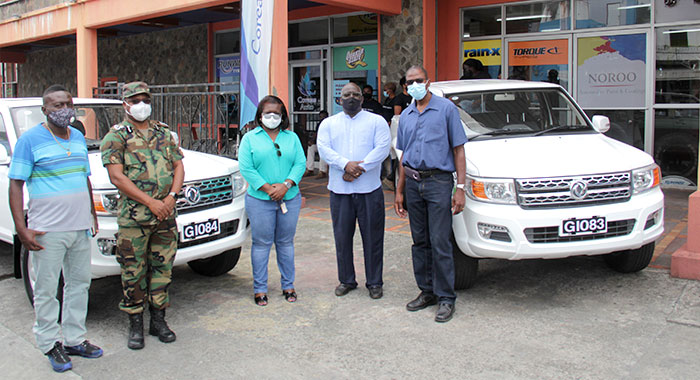 Coreas has donated two pick-up trucks to be used by two state agencies heavily involved in the response to the eruption of La Soufriere.

Joel Providence, managing director of Coreas, handed over the keys to two ZNA twin-cab pickup trucks to Commissioner of Police Colin John and Director of the National Emergency Management Organisation (NEMO) on Saturday.

The trucks are valued at EC$180,000 and were donated “to support the efforts of the government and people in their fight in addressing the issues and challenges that we have consequent upon the eruption of the La Soufriere volcano,” Providence said.

The donation brings to about $1.3 million the contribution that the company has made to relief effort.

“… and it may even be more depending on how long we have to content with the issues of the La Soufriere volcano,” Providence said.

He said that the Coreas family of businesses have been donating to both the government and people from since two or three days after the eruption on April 9.

“From the time of the first eruption, we felt that logistics and security were going to perform a pivotal role in the execution of the work of NEMO and everyone else involved in the exercise and transportation is a critical and fundamental part of the logistical arrangements.

“And we thought that the donation of these two vehicles would be an excellent way in which we can show our solidarity with both the work of the government and everyone else involved in the relieve effort,” Providence said.

He said that the vehicles were in Barbados and Coreas arranged thorough Courtesy Garage, to have them shipped on the Geestline, which provided the transportation without charge.

“I just want to indicate that this is not the end of our support, we will continue as we go beyond the immediate needs phase, into the recovery phase. And we will be here as we address issues like reconstruction and other works,” Providence said.

“As you know that we are heavily involved in the building materials industry as well, having stores located in different parts of St. Vincent and when the time is required and the government calls upon us, we would also be willing to provide support in this regard.”

Speaking at the ceremony, the police chief thanked the company “for pouring their blessings in our direction and for being a very good corporate citizen”.

John said that as a result of the eruption, police officers have additional duties.

He said that officers also have to patrol the Red and Orange zones to try to prevent crimes in those areas.

And, the NEMO director said that Coreas has been assisting at times of disaster.

“Throughout all emergencies that we have had in the last 10 years, certainly, you have been at the forefront as a good corporate citizen,” Forbes said.

She said that the response to the eruption  is probably the biggest in SVG and logistics and transportation support is a tremendous part of NEMO’s operations.

“Therefore, this vehicle will go a long way in adding to the fleet of vehicles that we use daily to deliver relief supplies to the various communities and emergency shelters throughout St. Vincent from Barrouallie to North Union and up in the interior,” Forbes said.

Hudson Need, permanent secretary in the Ministry of National Security, expressed gratitude on behalf of the government.

One reply on “Coreas donates pickups to relief effort”