Slain footballer had threatened to ‘call shot’ on match official 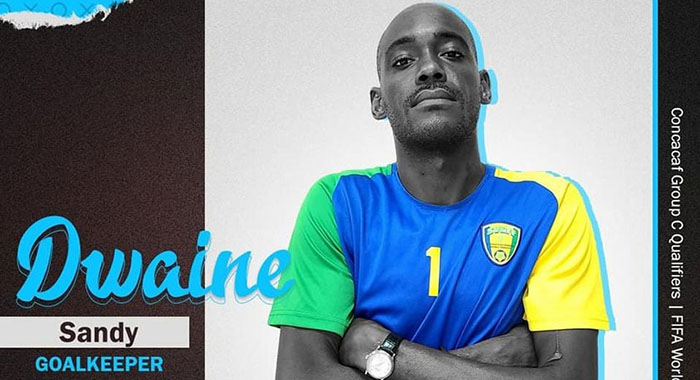 Dwaine “Tall Man” Sandy, 32, the national footballer, who was gunned down on Friday night had threatened to “call a shot” on a match official in Georgetown, in March, a comment that the official interpreted as a threat on his life.

Police have offered no theory about the shooting, but sources in the know have told iWitness News that the killing is not believed to be linked to the Georgetown incident.

The main national goalkeeper was shot multiple times while playing cards at a shop in the East St. George town, about 8:30 p.m., becoming the nation’s 16th homicide victim this year.

His girlfriend, Naressa Ollivierre, was shot in the arm, but iWitness News was unable to determine her condition at the time of publication.

Sandy was in St. Vincent, even as the men’s senior football team, for which he is the main goalkeeper, had travelled to Grenada, where they are undergoing preparation for two World Cup qualifying matches in Guatemala and Grenada in early June.

He, along with two other players, was not considered for inclusion with the squad because they are undergoing disciplinary proceedings.

Carl Dickson, president of the St. Vincent and the Grenadines Football Federation did not detail the incident(s) that led to Sandy being brought before the SVGFF’s disciplinary committee and being excluded from the national squad that left for Grenada last week Monday, May 18.

“As it relates to matters of disciplinary actions taken against players, we have always employed an independent committee outside of any stakeholders of football to review these matters,” Dickson told iWitness News on Tuesday.

“So that procedure is still ongoing and a recommendation is pending for the executive at this very moment — an official recommendation,” he said.

iWitness News was reliably informed that the committee had floated the idea of recommending that Sandy undergo psychiatric evaluation and receive counsel for “anger management issues” before rejoining the team.

Sandy, as well as Azhino Solomon and Nigel Charles, was not considered for selection because of separate disciplinary proceedings.

iWitness News was reliably informed that Solomon and Charles were involved in a fight on the sidelines, on March 25, after their 5-nil loss to Curacao in the Dutch Caribbean island, in their CONCACAF World Cup qualifier.

Asked to comment on the disciplinary committee’s alleged recommendation regarding Sandy, Dickson said:

“I do not have an official report from the disciplinary committee at this juncture so I cannot verify that information at all.”

The SVG football boss, however, said he was aware that when the team manager Renson Haynes returned to SVG about a month after the team, there was a technical committee meeting that reviewed the trip to Curacao.

“Coming out of that, a recommendation came to the executive for some disciplinary action to be taken pending investigation of all of the matters when persons became available due to issues of quarantine and other such inhibitors,” Dickson told iWitness News.

He said that the disciplinary matters involving Solomon and Charles were also not yet resolved.

“I am very much aware that as we speak, the disciplinary committee is in a meeting wrapping up their findings and recommendations for the executive. I anticipate that we would have that report by the end of tomorrow (Wednesday),” Dickson told iWitness News in the 9 p.m. telephone interview.

He said that neither Solomon nor Charles has joined the team in Grenada, where they are preparing for their June 4 match against Guatemala, in Guatemala City, and their June 8 match against Cuba, in St. Georges.

“In fact, I have spoken to Solomon who informed me earlier today that he is in quarantine for a [COVID-19] case that he was probably exposed to,’ Dickson told iWitness News.

And, Clemroy “Bert” Francois, a FIFA referee assessor, offered “no comment” on the question of whether Sandy had threatened him in his capacity as a football official, as iWitness News had been reliably informed.

Francois, however, confirmed that he had participated in an SVGFF disciplinary proceeding of which Sandy was the subject.

He said that he had been asked to submit a written report, but was unable to do so because of travel, and, therefore, he attended a Zoom meeting on the subject.

Francois said that the hearing related to “an incident in which I was a witness and involved”, but offered no further details.

However, a source with knowledge of the incident told iWitness News that it occurred as Vincy Heat were participating in a practice match in Georgetown ahead of their Curacao game in March.

Denroy Barker, a match official, is said to have prevented the SVGFF bus from driving across the field.

The source said that Sandy told Barker that he is “a f***ing bullerman”, a derogatory term used to describe a male homosexual.

The officials spoke to the manager of the team who brought Sandy before the officials.

Sandy gave what the source described as a “half hearted” apology and was, therefore, allowed to play the game.

The national goalkeeper then took it to Francois, accusing him of instigating the demand for an apology because, according to Sandy, he did not support Francois’ party in the November 2020 general elections.

Francois is also an activist for the opposition New Democratic Party.

The source said that Sandy also told Francois that he would pick up the phone and “call a shot” on him — an expression understood to mean “arrange to have a person murdered”.

iWitness News understands that this alleged comment reportedly directed at Francois, as well as two incidents afterwards led to Sandy being brought before the SVGFF’s disciplinary committee.

At an SVGFF press conference in Kingstown on May 14, Vincy Heat head coach Kendale Mercury confirmed that disciplinary proceedings had been initiated against the three players.

Asked about the reason(s) for the proceedings and how long they are expected to last, Mercury said:

“Well, not to delve into it, but to tell you it is with the disciplinary committee; they have already started their process so I will expect a resolution pretty soon. I personally would be happy if we have a resolution before we leave [for Grenada] so we know if we can include the players if they are cleared of that. But that is beyond my control. I will allow the system to do their work and just hope for the best.”

He said that if cleared after the disciplinary procedures, the players could rejoin the team and take part in the upcoming matches.

“I would go a little further to let the media know that the players were slotted into the parts, just in case,” he told the May 14 press conference.

On Saturday, the SVGFF issued a statement saying that it was “shocked and deeply saddened by the events” that led to Sandy’s death last Friday.

The statement noted that Sandy represented Vincy Heat as the number one choice goalkeeper for a number of years.

“He last donned the national colors on March 30, 2021 in an emphatic 3-0 win against Aruba in Curacao,” the statement said.

“The SVGFF fraternity extends heartfelt condolences to the family, friends, his club and teammates of Dwaine at this most difficult time. The SVGFF also takes this opportunity to express our abhorrence to all acts of violence in our society.”

It is not the first time that Sandy is making national headlines for reasons unrelated to sports.

In June 2013, police issued a wanted bulletin for Sandy in connection with the robbery of a postal worker and the shooting of a police officer in Kingstown.

Some days after the robbery, lawyer Grant Connell escorted Sandy from Grenada to St. Vincent and police released him without charge after about 48 hours in custody.

Sandy maintained that he was innocent of the robbery of postal worker, Cleopatra Wilson, of EC$100,000 in cash belonging to the SVG Postal Corporation, and the attempted murder of Police Constable Juliani Jack.

In April 2014, Colin “Cocoa” David was charged in connection with the robbery and shooting and was committed to stand trial on the matters.

Then, in June 2015, Sandy was charged with the attempted murder of Natterell Stapleton, a 30-year-old farmer of Calder, and Martin Davis, a 27-year-old unemployed resident of Villa, at Villa on June 10, 2015.

He was also charged with possession of an unlicensed firearm and discharging a firearm to endanger life.

The charges stem from an incident near the Young Island dock, in which the two men were shot.