NEMO won’t ‘kick anybody out’ of shelters — Forbes 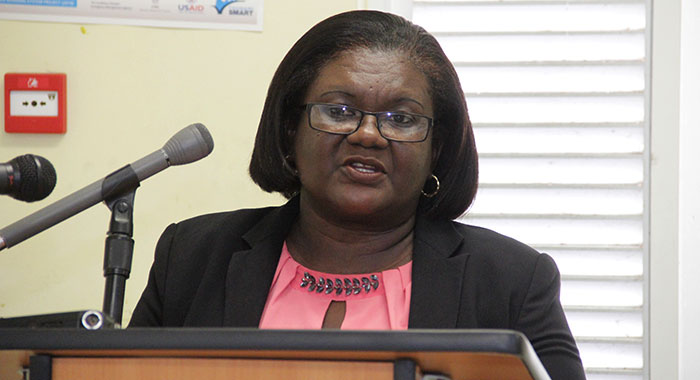 Director of the National Emergency Management Organisation (NEMO), Michelle Forbes, says that the agency will not “kick” out of emergency shelters, people who have been displaced by last month’s explosive eruption of La Soufriere.

“No. No. Not at all. Once we have people in the shelters, we are not gonna shut them down,” Forbes told iWitness News on Tuesday, when asked to respond to reports that NEMO had given evacuees an ultimatum regarding vacating the shelters.

“The information that was given is that we would have asked persons to try and return home by certain dates but there are people who may be in the shelters who cannot return home because their homes may be damaged, etc. but that’s not true at all…”

She said that the dates are the ones given by Prime Minister Ralph Gonsalves, chair of the National Emergency Council, last week Wednesday before he departed for Cuba.

Forbes noted that Gonsalves had announced that residents of the Orange Zone, up to Mt Young, could start returning home by this past Tuesday, May 25, while June 1 has been set for all displaced persons south of Rabacca.

“Those announcements were made last week by the prime minister, Forbes noted.

“Of course, there are persons who may not be able to return because of — for example, the Ministry of Housing started assessments today on the persons who … have indicated that their homes … have been damaged so that assessment … started today to just verify those persons who reported their home damaged.

“But we are not going to close the shelters and kick anybody out at all. That’s not true.”

She said that police were not sent to shelters to inform the shelter managers about the dates, as had been rumoured.

Forbes said that NEMO would move people from one shelter to another as the numbers of persons in shelters fall.

“So we are working on that. We are also looking at moving persons who are in churches also out of the churches but that is in the next phase.”

iWitness News informed Forbes that during a visit to Troumaca, an Orange Zone community, to which the government has said residents could return, a significant amount of volcanic ash was observed in public places, including on the road, schools and clinic.

One Troumaca resident, who is staying in a private home in Layou, said that she has to repeatedly clean her North Leeward home but[J1]  of the amount of ash remobilised from public spaces.

iWitness News asked Forbes if NEMO  was satisfied that the circumstances in those communities are sufficiently adequate that people can go back and live comfortably.

“BRAGSA has been doing their cleaning and we just came out of a meeting, actually,” the disaster management chief said.

“The National Emergency Council, we meet every week and we would indicate whether we are satisfied or not with the cleaning to indicate whether persons could have gone back home,” Forbes further told iWitness News.

“For a reversal of any decision, we would have to make that recommendation to Cabinet. We know there are some pockets of areas that need some extra cleaning. You mention Troumaca, that’s one of the things that came up too. The Troumaca school, in particular, for you to clean the clinic, for example, the school has to be cleaned first, because that’s slightly above. So we are aware of the situation; BRAGSA is working in all of these communities – from community to community to continue the clean up; so the clean up is on-going,” Forbes told iWitness News.

Meanwhile, on Wednesday, Gonsalves, speaking on NBC Radio from Cuba, said that by next Tuesday, June 1, all Orange Zone evacuees, except those from Fitz Hughes and Chateaubelair and those whose homes were destroyed in the eruption will be expected to return to their homes.