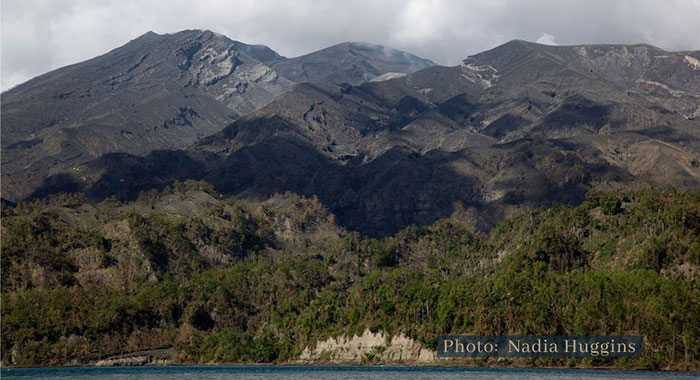 It could take “at least several weeks” more before scientists monitoring La Soufriere would give a clearer picture of what is happening at the volcano, five weeks after the last explosion.

Geologist Adam Stinton said on NBC Radio this week that his team will have to install additional equipment on the flanks of the volcano and close to the crater, for a clearer picture to emerge.

Stinton’s comments come even as the government is mulling over its options regarding cleaning of the Red Zone and allowing residents to return temporarily to clean properties and tend to livestock.

This access is being considered in the context of a volcano that could return to an explosive state with little warning.

At the same time, inherently dangerous lahars (mudflows) are forecast to become an increasingly common hazard with next Tuesday’s official commencement of the raining season, which coincides with the Atlantic Hurricane Season.

Stinton said on NBC Radio, on Wednesday, that, as has been the case over the past few weeks, the level of activity at the volcano continues to be “low”.

He said there had been about 10 earthquakes in the preceding 24 hours and the monitoring team had observed persistent steaming over the crater rim.

Gas measurements carried out on Tuesday indicated that the volcano was emitting about 463 tonnes of sulphur dioxide.

“So basically, the continuing pattern of low-level unrest is still present,” Stinton said.

He said that the earthquakes are too small to be felt by people and can only be detected by the monitoring instruments.

Deputy Prime Minister Montgomery Daniel, who appeared as an in-studio guest on the show, said that persons north of the Rabacca Dry River want to return home.

Daniel, who is Member of Parliament for North Windward, which includes all of the Red Zone communities in the northeast of St. Vincent, said that the government was aware of the risk of lahars in the Red Zone.

He asked Stinton who leads the monitoring team, whether the team would advise on persons returning to the Red Zone in the near future.

Stinton said that he appreciated residents’ wanting to return to their homes.

“But I think at the moment, certainly in the foreseeable future, I think permanent reoccupation of parts of the Red Zone is certainly not, or probably not possible at this time.”

He said that in order for the monitoring team to be confident that the volcano is not going to become more active again, the team needs to re-strengthen its monitoring network.

The geologist noted the loss of some of the monitoring stations during last month’s explosive eruption of the volcano.

He told the deputy prime minister that the monitoring team was in the process of preparing to reinstall three or more stations, including seismic instruments, tilt meters and, possibly, a permanent gas monitoring instrument.

“So, we need to be able to get those instruments in and have them up and running and get the data back to the observatory in real time in order to start to consider the next stage of the reoccupation of the northern part of the island,” Stinton said.

He said that it is important that the team has as strong as possible a monitoring network in order to be able to “pick up the smallest indication that something may be changing within the volcanic system”.

The lead scientist said that the team will also repair some existing instruments at various sites and the observatory will keep the government up-to-date on the activity and how the plans are progressing.

Two team members had visited the windward side of the island to check access and site conditions for the installation of two new stations.

“So, obviously, ensuring that there is good access and good power and communication supply is critical for us to be able to reinforce our current monitoring network,” Stinton said.

He said that the current activity at the volcano, namely the venting of gas, visible steaming, and the earthquakes “are the indicators that there is still some unrest on the summit crater following the explosion in April.

“And it is possible that this level of activity will continue for weeks, if not longer,” Stinton said, adding, “And so we have to remain vigilant and keep an eye on things.

“And once this unrest is continuing and once it is showing no signs of either increasing or decreasing, I think it is reasonable to say that people should not be reoccupying the Red Zone permanently.”

He noted that there is critical infrastructure work that needs to be carried out, in the Red Zone, but cautioned that that “needs to be done under the strictest and safest of conditions”.

Joining the conversation from Cuba, Prime Minister Ralph Gonsalves noted that there has been no explosive eruption since April 22, and since then, “basically the same situation” has continued at the volcano, “but there is still danger”.

He said that the question is the extent of the work north of Rabacca Dry River, located in the heart of the Red Zone.

“Because of the necessity and desirability to return to normalcy as soon as practicable, which means as soon as it is safe, and we have to get clearance from you and we understand you need additional equipment and the like, but we have to do work meanwhile, because you will advise, clearly, that we continue to clear the roads, we continue to clean the ash, Central Water and Sewerage authority can begin to repair the water systems, as far as practicable, and we begin to do the house by house identification as to whether they are suitable for electricity connection,” Gonsalves told Stinton.

The prime minister said that all that, presumably, can be done under strict guidelines.

Stinton said he appreciates the “desire to be back as soon as possible”, adding that as he was explaining to Daniel, the observatory was in the process of boosting its monitoring network.

“So you will have much more information now in order to be able to make your decision regarding permitting people back into certain areas in the Red Zone. This is important work that we need to get on with and, as I said, we are starting the process right now,” he told the prime minister.

The team lead said that he thinks that it is going to take “a couple of weeks at least” to get the equipment back up.

He noted that a colleague who arrived from Trinidad was still in COVID-19 quarantine and would be able to work with other colleagues to install the equipment, once his quarantine is complete.

The process should move quite rapidly as soon as it starts, Stinton said.

“… there is a lot of work that needs to be done in order to get those instruments in the field and installed and working. It is going to take at least several weeks.”

Gonsalves asked whether in the absence of that equipment being put in place, the government could do some basic things, like, where practicable, remove ash from roads and drains and clean water catchment areas.

Stinton said that given the current conditions and state of the volcano, entering the Red Zone in certain areas to be able to carry out this type of key work on key infrastructure, “is acceptable, within, obviously, the strict guidelines of safety”.

The prime minister noted that heavy equipment is needed to clean the road and they do not move as quickly as a car, and, therefore, might need several hours to move from say, Fancy, at the northern top of St. Vincent, to Rabacca – a Red Zone community, located near to the northern boundary of the Orange Zone.

The prime minister asked whether people would have “more than a couple hours” to evacuate should things change at the volcano.

The prime minister told his deputy that that “is the critical question”, adding that the same applies to CWSA workers who have to do repairs.

Stinton said that one of the pieces of equipment that has to be installed is earmarked to go near the summit of the volcano.

“However that will require some sort of helicopter support in order to be able to carry out that installation,” he said, adding that the team is focusing on installing instruments on the lower flanks of the volcano.

The prime minister said that the government would make a helicopter available to the team when they are ready for use of it.

Stinton said that in Montserrat, where he is based, when certain activities take place in the exclusion zone, such as the export of sand and gravel, everyone involved carries a radio to be in communication with police, the observatory and disaster managers.

“But the evacuation plan — if there is a sudden change in the activity at the volcano in Montserrat — is that they have a boat by the jetty to evacuate those on the jetty and then there are also vehicles on standby for the people involved in the actual mining of the sand in places so that they can leave their excavators and their dump trucks and leave in these pickup trucks and evacuate the area quickly. So perhaps that is something that could be considered here.”

The prime minister said that a private sector entity would not want to leave, in the Red Zone, equipment worth a half million dollars, and, hence, they will have to work out with the observatory regarding lead time in the event of any change in activity at the volcano.

Gonsalves further told the geologist that he did not want to put pressure on him because there is an anxiety for the country to get back to normal.

“That always has to be a function as to whether it is safe to do so… So far, we have done well in not having had anybody injured or killed,” the prime minister said.