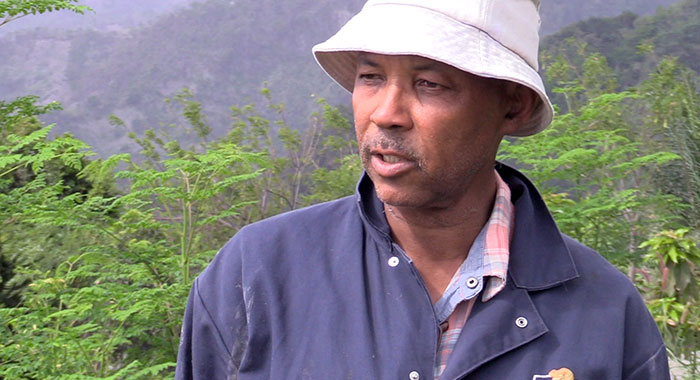 Even as a Rose Hall farmer is pleased with how his fruit farm is recovering after the significant damage caused by the April 9 eruption of La Soufriere, he is now counting the cost of dog attacks on his livestock.

iWitness News visited Lennox Lampkin last Monday, May 24, five weeks after we interviewed him on the impact of the eruption on his farm.

“In the last month, the vegetation has recovered considerably and we still have quite a lot of ash on the ground, but the trees have greened up quite a bit,” he told iWitness News.

“But, in the interim, I have had quite a bit of damage from dogs and livestock because I have had some damage from roaming cattle, and I have lost all my sheep that I had outside of one protected area of my rabbit pen. Everything I had outside was really killed by dogs.

“At this point, I thought it was 16 [sheep]  but one of them I have seen with a shorter rope on it, which appears that somebody had tied  it, but it got away again so I am still in the process of trying to find it. If I don’t find it, I have lost 16 of the 22.

“… The one that I had named ‘Soufriere’, that one was practically eaten by dogs Thursday before the last.”

Lampkin, an organic farmer, said that the slaughter of his sheep by dogs is a tremendous loss.

“… and emotionally, it has been very, very devastating. It’s been tough but I guess that is what I have to digest right now.”

Another problem is caused by cattle whose owners have set them loose, seeking out the drums of water that he had harvested from rainfall.

“Because even at this stage, just yesterday I went down below here and all the drums that I had there with the water, people have roaming cattle and the cattle don’t have water to drink and they turned over everything.”

Lampkin said he would not understand why cattle were still roaming free as most of the farmers are back in the community.

“… but I don’t know if there has been  any instruction or directive from the Ministry [of Agriculture] so that people can rein in  their animals but they still have cattle roaming,” said Lampkin, who was among farmers who did not leave Rose Hall amidst the eruption.

“So most of my devastation came not so much directly from the volcano but from the policy of letting go all animals and evacuating. That has been a devastating problem for us.”

Lack of water was major issue

He said that the lack of water had been a problem during the first two to three weeks after the eruption because the municipal supply to Rose Hall, Troumaca, and other Orange Zone communities had been disconnected.

“We sort of found some ways around it. I had some water stored here but outside of that, the Rotary has been very, very helpful,” Lampkin told iWitness News, adding that the club donated 55 water filters, which he distributed to residents.

“… so we have been able to collect water from the taps and filter that and use that instead of using bottled water. So that has really been a big help.

He said that this was a lesson for him as most of the time, when St. Vincent and the Grenadines is impacted by a disaster, large amounts of bottled water is imported into the country.

The empty plastic bottles then become an environmental problem.

“…I think it would be far wiser if we would focus on bringing in filters instead,” said Lampkin, who is also a former executive director of the Chamber of Industry and Commerce.

When iWitness News visited Lampkin’s farm on April 18, many of his fruit trees had broken branches while others were bending heavily under the weight of the ash.

A gentle shake of the trees was all that needed to cause them to rain volcanic ash, and the ground was grey with the deposits.

One month later and the tress are green again and weeds hide much of the ash deposits in some areas.

Lampkin said that seeing his farm green again “is really unbelievable because you can see the amount of ash that I still have here, but I am going to hoe out some of this ash and start planting again.

“So, maybe in the next two to three weeks, I’m gonna start cleaning off the ash off the terraces here and the trees like these I am just going to prune them back and there is going to be a fresh beginning. Absolutely. I think we are going to make things better than it was before. That is what I expect.”

Cautious about ‘quiet’ at volcano

Lampkin’s farm offers a commanding view of the volcano.

The monitoring team has said they are not yet in a position to say whether the eruption has ended and has warned that the volcano could return to an explosive state with little warning.

Lampkin, based on his layman’s knowledge and observation of the volcano, shares this view.

“As far as I could see, things have settled down pretty much but it doesn’t give me an impression that it’s finished.

“Because if you look at the edge of the crater, you would see a white line along the top of the crater and it is pumping out quite a lot of vapour and sometimes a little bit of  smoke on the western flank. So, it’s a waiting game,” Lampkin said of La Soufriere.

“We are gonna see if it will eventually blow again or if this is the end of it, but the volcano is still very much active.”

What he is really cautious about is what is likely to happen in the rainy season, as a result of the huge deposits of volcano ash on the volcano and many of the mountains across the country.

“… from my observation, the ash does not allow water to penetrate the topsoil. Despite the fact that the topsoil is very hot, when it rains heavily — you would pour water at the top of the farm and it would flow all the way to the bottom — It’s not sinking into the soil because when this washes out, it leaves a gummy sort of sand and that work something like a river bed and that, I expect, is going to have quiet an impact.”

Lampkin speculated that much topsoil would not be lost as a result of rainfall “but you are gonna have some damage done by running water when the rain really starts to fall.”

He also told iWitness News that he expects that the visible ridges of ash on the volcano, which are discernible even from a long distance, would wash into the Caribbean Sea.

“… but even all the other mountains that seem to be wooded, you can see areas of heavy ash deposits and I think that is what we are going to – not so much the volcano but the effects of the ash deposits – one of the biggest worries now going into the heavy rainy season, into the hurricane season coming up.”

The Hurricane Season begins on Tuesday, June 1, and forecasters are predicting an above-normal season with 13-20 named  storms, six to 10 hurricanes and three to five major hurricanes.

However, even outside of the context of tropical storms, mudflows in Sandy Bay last month gave an indication of the type of damage that could occur across St. Vincent, as a result of the eruption.