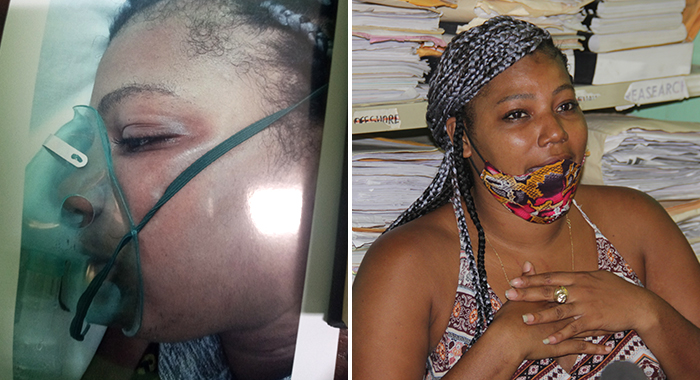 Asheka Haynes says she suffered a severe asthma attack after being choked and slapped by police last Friday.

Apology: iWitness News regrets the association of “Nigel John” with certain statements contained in an earlier version of this article. Sergeant Nigel John is a distinguished member of the Royal St. Vincent and the Grenadines Police Force and we apologise for any injury to his reputation caused by the publication.

Police allegedly beat two sisters at their Glen home, on Friday, causing the younger one to have an asthma attack that she said could have left her with brain damage or dead.

Asheka Antoine, 27, told the media on Tuesday that officers showed very little concern for her, even as she almost died.

Speaking to the media in the chambers of her lawyer, Kay Bacchus-Baptiste, in Kingstown, Antoine said an officer turned over her bedside table when she asked him to pass her the asthma pump she keeps on it because of breathing problems at night.

She said her asthma attack began after an officer choked her and beat her in the head when they came to the house, claiming they were looking for guns and ammunition.

Antoine’s sister, Shomorn Haynes, 32, who also lives at the house, said that police also beat her in the presence of her children.

“The senator, they said they were protecting her because she is a woman. What are we? Are we men?” Haynes said.

She was speaking about the April 13 case in which Senator Ashelle Morgan and Assistant Director of Public Prosecution Karim Nelson have been implicated in the shooting of Diamond resident Cornelius John at his home.

No arrest has been made in the case although John, a 60-year-old businessman, has identified one of his alleged attackers.

“We is dogs. We nah men; we ah dog,” Antoine said, sarcastically, in response to her sister’s comment.

At the press conference, Bacchus-Baptiste read what she could discern from the medical reports that Dr. Michael Goodluck, the district medical officer, produced when he attended to the sisters around 1 p.m. on Friday.

The report said that Antoine had several hematomas; multiple contusions; abrasions to the cheek, neck, anterior chest wall; the entire back, upper limbs, the thighs had painful swellings; contusions to the general scalp, which triggered a seizure and bronchial asthmatic severe episode, and a bruised pelvis.

In explaining what occurred, Haynes told the media that shortly after noon, on Friday, she was at home when she heard the dog barking.

When she looked outside, she saw about 22 police officers armed with rifles and handguns and all but three of them “covered from head to toe”, wearing what her description suggests were balaclavas.

Haynes told the media that the officers were on her mother’s property — which contains two houses — and a neighbour’s yard.

She said she asked multiple times what was going on before an officer told her,” Alyo go know just now.”

Haynes said Antoine then came out onto the porch, sat down and asked what was happening, but none of the officers replied.

She said Antoine told the officer she was going to call her mother to tell them that the police were there, “in case they had a search warrant”.

The officer told Antoine that could not use her phone and tried to take it from her.

Antoine maintained that she had a right to use the device and the officer again tried to take the phone and she put it under her bottom.

“The officer then come on the porch and lift her and slam her on the ground and take the phone from her,” Haynes said.

“So I ran over to her rescue and hugged her and told her to relax because after getting all this beating, she was obviously acting out and the police were armed with guns so I was scared that someone would hurt her, shoot her the way how they approached us,” Haynes said.

She said she tried to calm Antoine and put her to sit on a bench.

Haynes said that she turned to say something to her 15-year-old daughter, who along with her 13- and 8-year-old witnessed everything.

“After they finished doing all this and they pleased themselves beating us, they ordered her (Antoine) to the bedroom,” Haynes said.

She said that Antoine is asthmatic and epileptic.

Of herself, Haynes said:

Antoine told the media that the police “didn’t care” amidst her distress during the asthma episode.

“They showed no remorse at all even in the end, we were trying to explain to them that the person they were looking for was not living there,” she said.

“He took the table and he just flip it over. He didn’t hand the pump for me. He didn’t care…

“I dropped on the ground, I felt like I was going to die. My heart was beating so fast and I couldn’t breathe at all, at all, at all. He didn’t care.”

Antoine said that the police later took her and her sister to the Calliaqua Clinic.

“When we got to the clinic, the nurse was saying if they brought me in any later, I could have gotten brain damage, or, even worse, I could have died because I was wheezing so bad on both sides of my chest.”

She said that the officer just left them outside the clinic and left.

“… my sister had to struggle with me go inside”.

Haynes said one of the officers had threatened to arrest her sister claiming that she had hit a police officer.

“I was on the ground basically dying and the officer was sending another officer to get handcuffs to put on me,” Antoine said.

The sister said that the police did not show them a warrant.

“Up to now we haven’t seen a warrant and nobody has given us an explanation of what is going down,” Haynes said.

She said that when she was in the house she asked the officer why he had slapped her in front of her children.

“He turned to me and said, ‘When alyo brother ah kill and shoot people, why alyo don’t ask why.’

They said that the police later told them that they were looking for guns and ammunition and one Leejah.

“And the guy is not our brother. He was with one of our sisters. And they were together. And the same sister is not living there for years. He moved out. It’s almost five, six years he is not living by us and they will still come and harass us,” Antoine said of Leejah.

The police officer searched the house and the officer who slapped them told the team, “Don’t be afraid to trash the place,” Antoine said.

She said that the police later said that they were not going to arrest anyone, not even for a small marijuana tree that was in the yard, which the women said had sprung up there and remained there as the yard was yet to be cut.

They said that when they asked the officer who has struck them his name, he said it was “Delroy Hamilton”, but they later found out that that was not his name.

The women said that while they do not know the name of the other officer, they can recognise him as he is usually stationed at the mobile police station in Glen.

On Wednesday, Commissioner of Police, Colin John told iWitness News that the women had come to see him and he had referred them to the Police Public Relations and Complaint department.

He said he was not sure if the women had lodged a complaint, but that an investigation was being conducted.

He said he could not say when the investigation might be completed.

John told iWitness News that the officers had gone to the house to execute a search warrant in relation to illegal firearms.

31 replies on “Woman says she almost died after police beating”