Burglar gets 18 months for prison escape 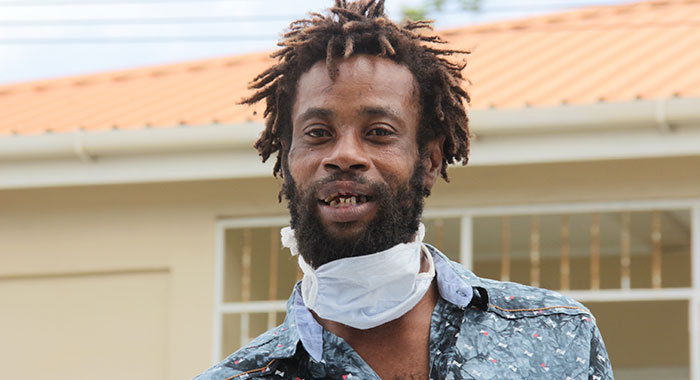 Orwin Small after his court appearance on Monday. (iWN photo)

The burglar, who spent 33 days on the run after escaping prison on May 1, emphasised to the Kingstown Magistrate’s Court, on Monday, that he did not commit any break-ins during his time on the run.

Orwin Small, 42, pleaded guilty to a charge that on May 1, 2021, at Belle Isle, while being in lawful custody at the Belle Isle Correctional Facility, serving a two-year sentence for the offence of burglary, he did escape from such custody.

For escaping prison, Small will spend an additional 18 months in jail.

In presenting the facts, prosecutor Police Sergeant Cornelius Tittle told the court that on May 1, about 9:45 a.m., Prison Officer Layne was responsible for taking several inmates, including Small, to the farm, located near the prison at Belle Isle.

Small and inmate McCarthy Patterson started to clean the pig pen and Patterson noticed that Small was stooping behind the pen suspiciously.

Patterson told Small not to do anything silly and Layne also noticed Small’s actions and went to investigate.

Small, who was stooping near some bushes indicated that he was going to pick coconuts.

Ellis conducted a search on Small’s person and when they were leaving the pigpen area, Small ran back to the bushes and attempted to evade Ellis who gave chase and later lost sight of Small.

The farm and prison were checked and Small was not found.

Prison authorities with the help of the police failed in their attempts to locate Small, who turned himself in to the Questelles Police Station last Thursday, June 3.

In mitigation, Small told Senior Magistrate Rickie Burnett that he was not running from the two-year sentence that Burnett imposed on him in January.

He said that when he went to the prison farm on May 1, he picked up a big bag of marijuana “with a whole set of unlegal things”.

Small said that the prison officer then requested a search of his person then told him that he “lock up”.

The defendant said he asked the prison officer why.

Small said he told the prison officer “the thing dey up so”.

He said that when he realised that the prison officer did not have “the evidence” even as he was threatening to lock him up, “I run and pick up the evidence to hide the evidence.”

The defendant said that the farm is not fenced and he ran in an area to try to “stash the bag” but ended up on the public road.

Small said he went back on the farm in his prison suit, but the officer ran him off the land again.

He said he went to Red Dirt, an area in Belle Isle where a type of red soft rock is mined and was roasting plantains when the prison officers again tried to apprehend him.
Small said he ran and ended up in Spring Village, the community to the north of the prison.

He said that notwithstanding all the running that he did, he did not reach his home.

“I give up myself. You can say I am an escapee, but I gave up myself,” he said.

Small said he that would not say he escaped from the prison.

In hearing this, the magistrate again read the charge to Small, who said he was guilty.

The magistrate outlined to Small that the maximum sentence for his offence is three years in prison.

“My Worship, I give up myself you know,” Small protested.

“It doesn’t matter, sir, that you gave up yourself. And maybe it is a good thing,” Burnett said.

Small noted that he was jailed for burglary, adding that he was out for 33 days and did not burglarise any place or commit himself.

The magistrate told Small that he should have been in prison.

Burnett told Small that the court would grant him the relevant discount for his early guilty plea but that the court must also send a message to prisoners to remain there until they complete their sentence.

3 replies on “Burglar gets 18 months for prison escape”