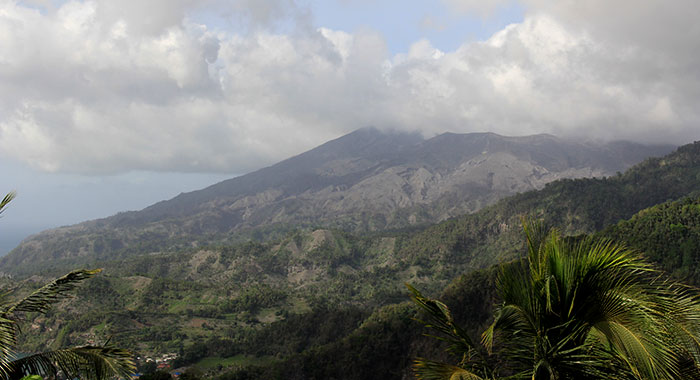 Scientists monitoring La Soufriere have been waiting for weeks for permits to erect instruments to monitor the volcano which erupted explosively over two weeks in April.

The delay comes even as volcanologists have warned that while the volcano seems to be settling down, it could begin erupting explosively again.

Speaking on NBC Radio’s “Eyeing La Soufriere”, on Monday, head of the monitoring team, Lloyd Lynch, of the University of the West Indies Seismic Research Centre,  noted to Prime Minister Ralph Gonsalves that he had been asked about when a mudflow monitoring system would be implemented.
“The question was asked, ‘How soon do I think we could put together a proper monitoring system?’ And my answer was I really don’t know the answer,” Lynch said.

He said that he had been involved in monitoring for many years, “as evidenced on the colour of my hair and I know that there are many well-intentioned people around who could get a system in place.

“But you have to be mindful that we live in a society where there can be a lot of impediments,” Lynch said.

“Take, for example, we need to get more monitoring instruments out into the at-risk community and you can’t just take your instruments and put them down anywhere. You need to get proper site permits … and they sometimes can be very lengthy.”

Lynch said he had spoken to someone whose wife works on the geothermal exploration project “and they had to relocate some people and therefore had to get some land information out of Surveys and it took several months.

“I have been here now for two weeks going on for three weeks and looking for permissions to put stations on three sites: one in upper Walliabou, one in an area we call Greiggs Mountain, which is west of Greiggs, and another site up at Fitz Hughes and we still cannot get permission as yet.

“So you have these impediments that are difficult to–” Lynch continued when the prime minister interjected:

“But Lloyd, I don’t know who you are seeking the permission from because it is the first time I know that you all are seeking this permission because the Minister of Land and Physical Planning happens to the acting prime minister at the moment and Surveys is under him.”

The prime minister went to Cuba to accompany his wife who is receiving medical attention after spinal surgery in the United States earlier this year.

The prime minister said: “If there is a bureaucratic impediment, the political directorate doesn’t know about that. Certainly, I don’t know about it.

“And I am the minister responsible for disaster preparedness and I talked to Michelle Forbes [director of the National Emergency Management Organisation] down to day before yesterday …  and nobody told me about it.

“But the point about it is this, there might be a request, Lloyd, but if the request is – I don’t know where it is made, so I am hoping that the various agencies, the chief surveyor’s officer, NEMO, Physical Planning, the various agencies, and this is a matter which I will certainly follow up on now that you have raised it but this is the first time anybody tell me about that.”

The prime minister said he knew about a request for a helicopter and he moved on that.

Lynch said that that was an impediment that the team faced.

“With great respect, that is if the Observatory and the SRC do it in the bureaucratic manner. The policymakers need to know.”

Lynch, however, said that the observatory communicated with NEMO.

“And NEMO is working on it but—”

Gonsalves said, “But I don’t know about it and all it will do is to take one telephone call from me to the relevant persons.

“These are things which will have to be moved with rapidity and not in a bureaucratic manner. I will tell you something, St. Vincent and the Grenadines, in this regard, is far more nimble than any other country that I know in the Caribbean, because the political directorate gets very active on these matters. So I want to make that point.”

The Prime Minister said he was glad that it was drawn to his attention.

Lloyd suggested “a taskforce who can fast track it.”

“With respect, Lloyd. Lloyd, the first thing that you need to do is to get somebody who has — who is going to put together — a consultant putting together with everybody concerned a capital project and let us find out what is the cost, with the various agencies, which I was talking to you about.”

Lynch said that he saw an email over the weekend, “which indicates that this may be happening”.

Gonsalves said that was good news.

“But believe me, at the level of the policymaking, we are very, very activist on these things. So as soon as we finish, I am going to call NEMO to find out where there is any blockage. Bureaucratically, that is,” the prime minister said.

He however said that Lynch’s suggestion regarding getting a comprehensive programme to deal with lahars and all the various elements “is a very good one.

“And all I was saying, we didn’t start with a blank slate but we have to put it, within the context, with urgency that we have ahead of us the rainy season now with lahars, next year’s rainy season.”