Shooting shows ‘we could hide murders’ in SVG — Leacock 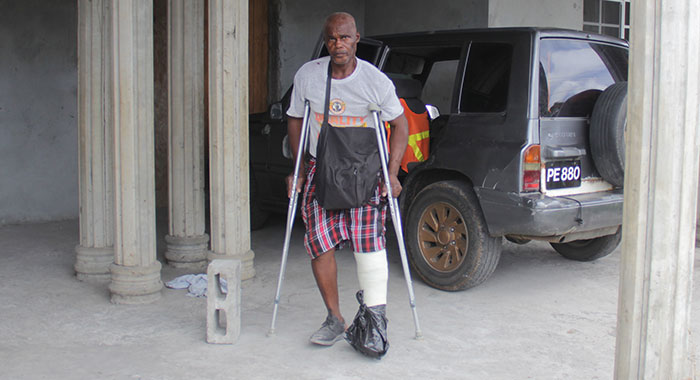 Member of Parliament for Central Leeward, opposition parliamentarian St. Clair Leacock says the authorities can hide murders in St. Vincent and the Grenadines.

He came to this conclusion based on the fact that the police are yet to disclose the third person present when Cornelius John, 60, was shot at his home on April 13.

“… I find that outrageous. Why the secrecy that you could have a person involved in criminal activity and nine weeks after a commissioner of police doesn’t find it necessary to tell the public these are the three actors?

“Because if we are bringing St. Vincent to that low state of accountability on criminal matters, and justice and rule of law, we have no country. And as you have repeated over and over again, we are not on anybody’s plantation and enough is enough.”

Leacock, an NDP vice-president, made the comments in a call to his New Democratic Party’s  (NDP) daily radio show on “New Times”, on Monday.

At the time, Leader of the Opposition and party president, Godwin Friday was a guest on the show as Leacock belaboured what he saw as the wrongs of the ULP.

The three-term MP and former senator said he was prepared to stage a one-man protest against the government.

“The Unity Labour Party and Ralph Gonsalves are too comfortable in St. Vincent and the Grenadines, far too comfortable with the misrule that is taking place, and the hunger and the poverty, and the degradation, the absence of faith, and the crime and the violence and the gun shooting must stop and now,” Leacock said.

“The absence of governance in this country, the situation in which we are flying in the face of the rule of law and we want to make it acceptable that this government can do anything is even more serious than the shooting of Mr. John in his foot.”

John, a farmer and businessman, of Diamond Estate, has said that government senator Ashelle Morgan — who is also a lawyer and deputy speaker of the House of Assembly — and two men whom he did not recognise, went to his house uninvited on April 13.

He said that one of the men shot him in his left leg and Morgan threatened him with a gun before the trio left him there bleeding.

Assistant Director of Public Prosecution, Karim Nelson has also been implicated in the shooting, but police have not disclosed the identity of the third person.

John said that the three people were all wearing face masks, but he was able to recognise Morgan — who grew up in the community — by her physique, gait, and voice.

Leacock also noted that the government has not radio businessman Marcus De Freitas the million of dollars they owe him after acquiring his property about 15 years ago.

He noted that about eight months after the general election, the ULP still has election billboards across the country, in defiance of the planning authorities.

The opposition lawmaker was referring to the recent situation when Gonsalves was in Cuba, and his deputy, Montgomery Daniel acted as prime minister.

“It is unacceptable. It cannot happen anywhere else, not in Jamaica, not in Barbados, not in St. Lucia that we have brought ourselves to a situation that only one person has the authority, the ability, the capability, the likeness, the acceptance, whatever the hell we want to call it, to run St. Vincent. We can’t have that.

“So the demonstration is not just about Ashelle Morgan and the deputy DPP and the allegations, but it is about where we are heading is in a deep dark hole and our generations unborn will ask where were we.

“Every school child, every business place, every child and women’s group, every youth group, every clergyman, police man, nurse, public servant, taxi driver, minivan driver, parent, should say we have crossed the redline, the point of no return.”