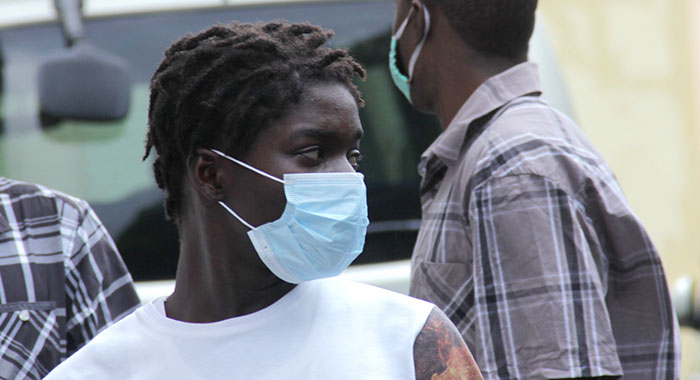 Roshurn Richards arrives at the Serious Offences Court for his sentencing on Thursday. (iWN Photo)

A Diamond teen has been jailed for two years and three months for possession of one homemade firearm and one round of 12-gauge ammunition at Stubbs on June 10.

Chief Magistrate Rechanne Browne handed down the sentence on Roshurn Richards, 17, at the Serious Offences Court on Thursday.

Richards pleaded guilty to the charges last Friday, June 11, and his sentencing was initially set for last Monday.

However, on Monday, the chief magistrate again adjourned the sentencing, saying that she needed clarification on the facts.

She ordered that the investigator appear before her to provide such clarification.

On Thursday, the investigator PC942 Ryan Barbour, of the Narcotics Unit, told the court that on June 10, about 9:40 a.m. he was among officers on mobile patrol in Brighton, when they received information of an alleged shooting in Stubbs.

When the party got to the area of the Stubbs Government School, they spoke to a woman who told them that the victim had been taken to the Stubbs Polyclinic.

At the clinic, the police met and spoke to CJ Weekes, of Argyle, who had a white vest tied around his right arm.

Weekes told the officers certain things and, as a result, they went to a shop in Lower Stubbs, which is operated by Rawlins “Space Man” Veira.

A group of men were inside and outside the shop.

Richards was also present at the shop, and based on his body language, Barbour requested a search of his person.

Nothing illegal was found but Barbour realised that Richards had his hand behind a wall that was about three feet high, so the officer asked him to remove his hand.

When the search was completed, the officer looked behind the wall and found taped pipes resembling a firearm, which were wrapped in a black t-shirt.

One round of 12-gauge ammunition was also in the pipe.

Barbour showed the items to Richards and cautioned him in the presence of Sergeant Simmons.

The defendant denied knowledge of the firearm, saying, “Is only weed I have.”

Richards told the officer that it was his cousin’s birthday and they were just enjoying themselves at the shop.
The officer asked Richards, in light of the fact that he was a Diamond resident, why go to a shop in Stubbs to have a birthday party.

Richards did not reply.

The officer told the court that he asked Richards to point out “Chippy” and “Gun Bag”, adding that he knows “Chippy” well for about four years.

“Chippy” denied knowledge of the firearm and told the officers there was no person at the shop who goes by the alias “Gun Bag”.

“Chippy” further told the officers that he knows Richards well and Richards met them at the shop that night.

This confirmed what Richards had told police separately.

When asked to describe “Gun Bag”, Richards told Barbour that “Gun” Bag was in his mid-20s, fair in complexion, and of slim build.

Richards took police to a house in Diamond and said that “Gun Bag” should be there because he is in a relationship with a female who lives there.

The defendant told the officers that he (the defendant) also lives in the house.

Sergeant Simon and PC 949 Smith went to the house and Barbour stayed with the defendant in the transport, about 100 metres away.

When the officers returned, they had with them a man who gave his name as Brandon Gonzales, of Owia.

Richards told the officer that the man was “Gun Bag”.

The two men were taken to the Central Police Station in Kingstown, riding next to each other in the police vehicle.

When they got to the Central Police Station, Richards told the court that the man was not “Gun Bag” and proceeded to give a completely different description, saying “Gun Bag” is slim, in his mid-20s and dark in complexion and has a low cut hairstyle.

The officer said that no one at the scene where the firearm was found matched that description.

Barbour took the pipes to a police firearm expert, who confirmed that it was a functional firearm, capable of discharging ammunition.

He then went back to the Central Police Station and spoke to Richards, who did not give a caution statement.

Richards was then charged.

Richards told the court that the facts, as presented by Barbour, were correct.

In his comments on sentencing, prosecutor Sergeant of Police Renrick Cato noted that Richards lives in Diamond and was met at a shop in Stubbs at a birthday party.

The prosecutor said that the court must ask itself what Richards’ intention was, being in Stubbs with a firearm “with a live round of ammunition in the breach”.

Cato said that Richards had pleaded guilty, but initially told the court that he had heard loud explosions and he saw “Gun Bag” running and “Gun Bag” gave him the gun and the police showed up at the same time so he threw it over a wall.

The prosecutor noted the inconsistency in the information that Richards gave police about who “Gun Bag” is.

He noted the seriousness of the offences, adding that while Richards is just 17, long ago, when a child said, “I will shoot you”, one could dismiss it as a joke, but that is no longer the case in St. Vincent and the Grenadines.

He asked the court to let its sentence reflect the seriousness of the offence, reiterating that the ammunition was in the breach ready to be fired.

Cato emphasised that Richards was at a birthday party in another community and questioned why he had carried a firearm there.

Before sentencing the teen, the chief magistrate asked him if there was anything he wanted to say in mitigation.

Browne pointed out to Richards that when he first appeared in court, she had to coax certain information from him.

Richards said that he did not want to say anything in mitigation.

For the firearm, the chief magistrate sentenced him to two years and two months in prison and one month for the firearm.

Both sentences will run concurrently.