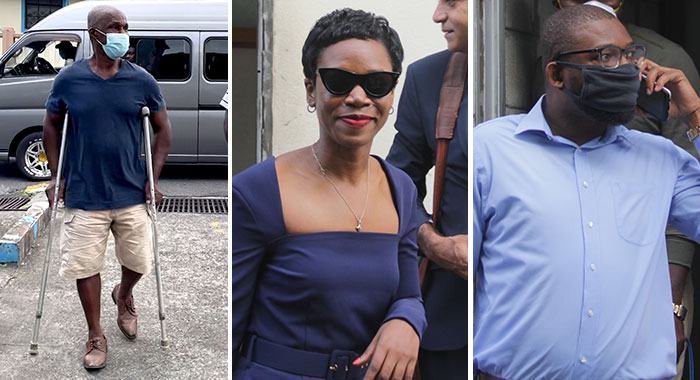 An iWitness News montage photo of COrnelius John, Ashelle Morgan, and Karim Nelson outside the Serious Offences Court on Friday.

The number of charges brought against shooting victim Cornelius John increased by one, on Friday, when he was arraigned at the Serious Offences Court.

John appeared at the same court as Assistant Director of Public Prosecution, Karim Nelson, and Senator and Deputy Speaker of the House of Assembly, Ashelle Morgan, who he alleged came to his house on April 13, when he was shot.

Director of Public Prosecution Sejilla Mc Dowall represented the Crown in the matters, while Ronald “Ronny” Marks represented Morgan and Nelson and Kay Bacchus-Baptiste appeared on behalf of John.

The DPP did not object to bail for any of the defendants.

John, a 60-year-old businessman, is facing three charges while two have been brought against Nelson and one against Morgan.

John is charged that on April 13, at Diamond, he “used threatening language to Nicole John in circumstances likely to cause a breach of the peace, to wit: he ‘would chop off my neck, sacrifice my head and blood to the devil with me and my children’.”

He is a further charged that on the same date and place, “used threatening language to Nicole John, in circumstances likely to cause a breach of the peace, to wit: ‘you want me to get a machine gun and kill you and your grandchildren and children and take alyo out’.”

A third charge is that on April 13, at Diamond, he “used threatening language to Ashelle Morgan in circumstances likely to cause a breach of the peace to wit he ‘had grenades and machine guns and that I should not get in his way or he will kill me and his wife’.”

John pleaded not guilty to all charges.

His lawyer asked that he be granted bail in his own recognisance.

Chief magistrate Rechanne Browne granted the application, and set bail at EC$2,500 bail in John’s own recognisance, meaning he was not required to provide a surety.

The court further ordered him to have no contact with the virtual complainant and adjourned and transferred the matter to the Calliaqua Magistrate’s Court for hearing on July 5.

Bacchus-Baptiste asked whether the matter between John and his wife should not be heard before the family court.

The chief magistrate said that the Calliaqua magistrate would make such a determination when the matter gets there.

Also on Friday, Morgan was granted EC$2,000 bail with one surety after she pleaded not guilty to a charge that on April 13, at Diamond, she assaulted John with intent to commit an offence to wit, wounding.

“We are having a stare down in here,” the chief magistrate asked as Morgan was standing in the dock and counsel Bacchus-Baptiste was at the bar table.

Bacchus-Baptiste asked for clarity on the chief magistrate’s comment and Browne said that she was noticing some staring between Morgan and Bacchus-Baptiste.

“What? No. As a matter of fact, my mind is on my client,” Bacchus-Baptiste responded.

John was not in court when his matter was called, initially, and his lawyer told the court that he was at the hospital and had been there since 7 a.m. that morning.

Nelson pleaded not guilty when he was arraigned on charges that on April 13, at Diamond, he unlawfully and maliciously wounded John, and that on the same date and place, he unlawfully discharged a firearm at John.

Nelson was granted composite bail in the sum of EC$10,000 with one surety and was ordered to surrender his passport.

The court ordered him to have no contact with the virtual complainant and ordered that stop notices be placed at ports of entry and exit.