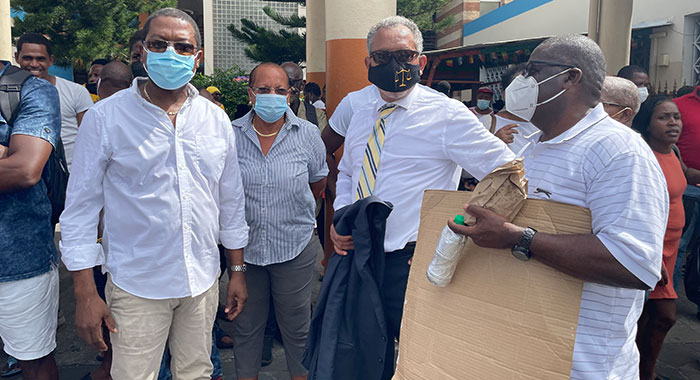 Leader of the Opposition Godwin Friday, on Tuesday, expressed satisfaction with the protest outside Parliament, which was intended to highlight a number of national issues.

Friday said he thought that the protest was “a very, very good sign because normally you have people who want to protest but they are afraid.

“It shows that the people are becoming more and more courageous — either that or their backs are being pushed so much against the wall that they feel that they have to stand up,” he told iWitness News in an interview on the picket line.

“And the message I have is that this is not the end. It is not the beginning; it is a continuing process that will force the government to take account of what the people in this country want.”

The main issue that the protest was intended to highlight is the allegation that government senator Ashelle Morgan assaulted a 60-year-old businessman with intent to wound him.

Cornelius John has alleged that Morgan pointed a firearm at him and threatened to shoot him on April 13, after Karim Nelson, an assistant director of public prosecution, allegedly shot him at his home.

Nelson has been charged with wounding John and unlawfully discharging a firearm at him.

Morgan has applied for and received one month’s leave of absence from parliament, pending the outcome of her trial, but said she had no moral or legal obligation to do so.

“I mean the whole notion that you have a member who is accused of a serious criminal offences, who is charged with such an offence — nobody has convicted her — but to say that you have no moral obligation to the people of this country to say having been charged with these matters, I will step back and seek to clear my name before I do anything else. That is arrogance. And this is what the people are saying here today. Enough of that.”

During Tuesday’s protest, some persons threw down police barricades and used them, intermittently, to block the roads and halt the flow of traffic.

Asking about this, the opposition leader said he has told people that he doesn’t want anyone to get injured.

“I don’t want anybody to be hurt. I don’t want anybody to create any unnecessary problems for one another. What I have seen so far is a very well restrained and orderly process but people are protesting vigorously, robustly; they are showing that they are incensed with what is happening in the country,” Friday told iWitness News.

“But, thus far, the people are respecting each other’s safety and so forth. So what has happened so far is a very good example of the democratic expression of the people when they are pushed.”

He said he has heard of some instances where the police have been aggressive with the people.

“And that is something that the police have to understand. They are here not to protect the state against us but also to ensure that we, our rights as citizens to protest, that those rights are also respected.

It has a little give and take and the police have to recognize that. There are some of them who are very aggressive and feel somehow that for us to be on the street protesting, it is an affront to them; it is a challenge to them. It is not that at all. It is an expression of a democratic right, and they have a duty to us as well to ensure that we are safe and that we are protected while we are doing that,” he said.

However, towards the end of the protest on Tuesday, police reportedly pushed and slapped several protesters.

However, iWitness News is not clear about the circumstances surrounding the violence.