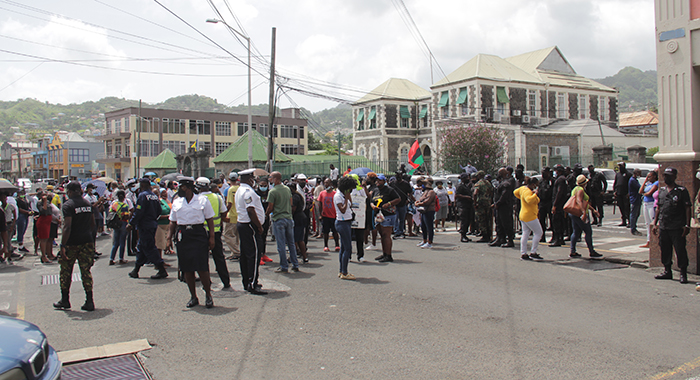 The Government of St. Vincent and the Grenadines has zero tolerance for police brutality, Prime Minister Ralph Gonsalves told Parliament on Tuesday, in response to a question by opposition senator, Shevern John.

John asked Gonsalves, who is also Minister of National Security and Legal Affairs, to say how the government has been tackling police brutality and whether any studies have been undertaken as to how to increase public confidence in the protective services of the police department.

“First of all, I want to say that the policy of this government and it is in this police force also to have zero tolerance for police brutality,” Gonsalves said.

He said that wherever there are instances or allegations of police brutality, they are accommodated either through an internal investigation — in cases where the complainant does not want to pursue legal remedy – or the law courts.

“More often than not, the people who are subject to quote-unquote police brutality or at least allegations of it, the files are usually sent, the matter having been investigated, sent to the Director of Public Prosecution, and in most cases, I have been advised, that there is some form of prosecution — the overwhelming number of cases, we have had prosecution.”

The prime minister said that in some cases, as a result of those prosecutions, police officers have been found guilty.

“In any event, there are several cases that have come before … the civil court for compensation. Some of those cases were dismissed, some others … the police officers have been found guilty and because, invariably, you sue the police officer and the state — the attorney general — and compensation has been paid in cases.”

Gonsalves said that there are some cases where there is no sense in defending the civil suit and, therefore, the attorney general seeks to negotiate a settlement.

“But I want to assure the honourable senator that this government has a zero tolerance toward police brutality. Police can do their work without beating up people,” Gonsalves said.

“Of course, the point is this, we must give the police officer, however, the right to self-defence, that if somebody is coming to them and beating them or resisting arrest, they will have to subject them and they will have to subject them with reasonable force within the four walls of the law and not to go out on an excursion of their own. So I am glad I have the opportunity to restate what is the position of the government. We don’t support any issue of police brutality.”

He said that in the overwhelming number of cases, if a police officer is found guilty of a criminal offence, the Commissioner of Police would make the representation to the Police Service Commission for the officer to be dismissed.

Gonsalves said that the government is always seeking to enhance public confidence in the protective services of the police force. We have done so at a broad policy level of having far more police officers than before who are far better trained and equipped.

He said that larger sums of monies have been budgeted for the police force.

“You can see the difference in salaries over the last 20 years, the growth in salaries, working conditions and the like, so there is a general improvement in the quality of policing.

He said there are other initiatives in building confidence in the police, including investigating reports made by the public and providing timely feedback and updates; ensuring that in the overwhelming number of cases that the perpetrators are brought to justice; information programmes, like those on public radio, and police social media page; crime prevention exhibitions; developing and participating in neighbourhood watch groups; including the police band to participate on community activities in the pre-COVID period; and  youth summer programme, including programmes at the Coast Guard and DARE.