Men to be sentenced for 166 lbs of ganja 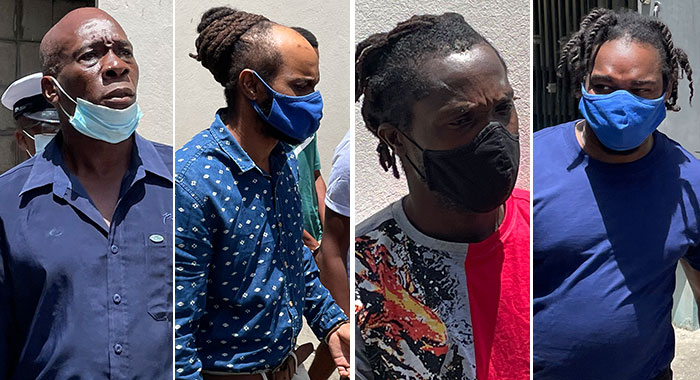 Four men — two Vincentians and two Grenadians — will be sentenced, on Tuesday, in connection with 166lbs of marijuana seized off Bequia on May 21.

Grenadians Nickel Milkson, 38, a painter, and Devon Williams, a 41-year-old fisherman, as well as Vincentian Dwayne Richards, 38, a farmer of Fitz Hughes, had pleaded guilty while Bertram Simmons, 53, a farmer, also of Fitz Hughes, was found guilty on charges that:

The men were nabbed when, acting on information, Coast Guard vessel SVG 02, with a party of officers headed by Chief Petty Officer Daniel, was dispatched on patrol. While patrolling southwest of Kingstown around 3:05 p.m., the party saw the boat travelling south at a fast rate.

The Coast Guard was able to intercept the boat in about five minutes and met the defendants and a number of nylon sacks on board.

The vessel along with the men was taken to the Calliaqua Coast Guard Base and the five sacks on the vessel were found to contain brown taped packages.

Detective Corporal 103 Germano Douglas opened the sacks in the men’s presence and found that each continued plantlike material resembling cannabis.

Douglas pointed out the offences to the men and Milkson pointed out two sacks and a brown taped package and said, “These are mine.”

Williams told the officers that he is the captain of the vessel.

“I only brought up foodstuff and ah man tell me to carry down the thing them and me go eat ah food.”

Richards told the officer that one of the sacks belonged to him.

Simmons told Milkson, “Man deal with that. Me only ask for a ride to go look for ah work.”

The officers weighed the packages in the men’s presence and they weighed 73,500 grammes.

The men were then charged.

In mitigation on Friday, the men’s lawyer, Grant Connell, told the court that although Richards was the captain of the boat, placing the drugs on his boat was not his idea.

“That’s not what he came to St. Vincent and the Grenadines for,” the lawyer told the court.

He also raised issues about the value of the drug, which would influence the sentence that the court might impose.

Connell asked the court to impose a fine.

At this point, Chief Magistrate Rechanne Browne, who was presiding, said that given that Richards was the captain what should happen to the boat.

Connell said that given the uncharted waters resulting for the COVID-19 pandemic, “travel between the islands may have to resort to yesteryear”.

He said the boat could be the vehicle on which the men return to Grenada.

The lawyer said that Simmons is a father of six and while he did not plead guilty he expresses remorse for his action.

He said that Simmons was merely in the wrong place at the wrong time.

The lawyer said that Simmons is of good character, adding that even officer Douglas said that he believed the explanation that Simmons had given to the police.

Connell said that it was unfortunate that that was the only boat on which Simmons could get a ride to Grenada.

He said that Simmons was unemployed but had relatives who are willing to help him pay a fine.

Regarding Milkson, the lawyer said he is the father of two, pleaded guilty and is, therefore, entitled to a discount on his sentence.

He said that Milkson was convicted of similar offences in Grenada and an inference may be drawn from his telling the officer what portion of the marijuana belonged to him.

Connell said that while his client expresses remorse for breaking the Vincentian laws, he was helping himself to some of the “green gold” that St. Vincent and the Grenadines has.

“What Soufriere left, he was able to get some of it,” Connell said.

Meanwhile, in his submission on sentencing, prosecutor Police Sergeant Renrick Cato told the court that if the men were only charged with possession of the drug, he would have agreed with the defence counsel that a fine should be imposed.

The prosecutor, however, noted that the charges include drug trafficking and attempted exportation,

Cato further noted that two of the defendants are non-nationals and had two nationals with them.

The prosecutor further pointed out that the captain had said that he had been told that he could “eat ah food”.

He said that the men ought to know the consequences of being caught with drugs on a boat.

Cato said that Simmons had claimed that he had asked for a ride but he was met sitting on the cannabis, which the police said was emitting a strong odour.

The prosecutor asked the court to let the sentence reflect the seriousness of the offence.

The chief magistrate adjourned the sentencing for Tuesday, at which point the court is expected to receive information about the value of the boat.