Defendant says guns, ammo were handed to him at G’town Police Station 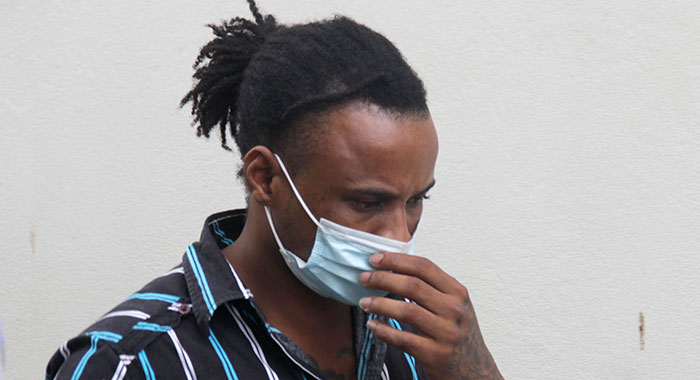 Avi King, the 26-year-old Diamonds labourer who pleaded guilty to nine of the 10 charges against him in connection with the disappearance of firearms and ammunition from the Georgetown Police Station, told detectives that someone at the station handed the weapons and ammunition to him.

This is according to the facts presented at the Serious Offences Court, on Monday.

Chief Magistrate Rechanne Browne adjourned sentencing in the matter until today (Tuesday), when counsel Nakita Charles, who is acting amicus, is expected to make a plea of mitigation on King’s behalf.

King is charged in connection with the disappearance of two Glock 22 pistols, one M4 rifle and 305 rounds of .40 mm ammunition from the police station.

On Monday, prosecutor Police Sergeant Renrick Cato asked the court to entertain the reading of the facts.

King is charged along with fellow villager 26-year-old Meshach Dublin, aka “Shane” and “3D”, who is unemployed, and Zackrie Latham, 25, a former police constable, of New Grounds.

Both Latham and Dublin have joint charges separate from King, while the trio each has charges brought against them individually.

Latham has pleaded not guilty to all charges while on Monday, Dublin, represented by a new counsel, changed all his pleas from guilty to not guilty.

Myron Samuel, a 28-year-old self-employed former national footballer, of Layou, is alleged to have purchased one of the pistols and 15 rounds of ammunition allegedly stolen from the police station.

He pleaded not guilty to the charges during his June 21 arraignment and is slated to appear before the same court today for trial on charges of possession of a firearm and ammunition without a licence.

iWitness News is withholding some of the names mentioned in the facts in King’s matter so as to not prejudice any pending trials in relation to the heist.

In presenting the facts, Cato told the court that as a result of the explosive eruption of La Soufriere volcano in April, police officers from the Owia and Sandy Bay police outposts relocated to the Georgetown Police Station, taking their weaponry with them.

The weaponry included M4 rifles, Glock pistols and .40 ammunition and was secured in armoury at the Georgetown Police Station, which is a three-story building.

The prosecutor noted that the armoury is located in the building but — presumably for national security reasons — did not disclose on which floor.

He said that on June 2, the firearms and ammunition were accounted for by the officer in charge, who, at 7 p.m., issued a firearm to a colleague as part of his duty.

On June 3, about 4:15 p.m. police went to the armoury and observed that the wooden strip around the door had been tampered with.

This aroused the officer’s suspicion and he used the key to unlock the armoury and observed that three Glock pistols, serial numbers LNL 151, LNL 155, and LNL 144, one M4 rifle serial number W877775, and “a number of ammunition” was missing.

The matter was reported to the Major Crimes Unit, which launched an investigation, headed by MCU leader, Assistant Superintendent of Police Oswin Elgin Richards.

Corporal 743 John of the Criminal Records Office visited and processed the scene.

King became a suspect in the investigation and about 11 a.m. on June 17, Richards led a party of officers to the San Souci Learning Resource Centre, where King was met.

Richard informed King of the investigation and arrested him on suspicion of being involved.

King was immediately cautioned and admitted his involvement, telling Richards, under caution, that on June 2, he was invited to the police station during the night, after it closed.

Cato told the court that that station closes at midnight.

Returning to the facts, the prosecutor said that King further told Richards that on arrival at the police station, someone there handed him the four firearms and a quantity of ammunition.

That same day, June 17, King took Richards and the party of officers to a home in Diamonds, saying that he had handed over the weapons and ammunition to someone there so that that person could sell them.

The occupant of the house whom King had identified was told of the allegation and the occupant took the police to the Diamonds Cemetery and pointed out an area, saying that King had buried the M4 rifle there.

The rifle was retrieved and bore the serial number of the one missing from the Georgetown Police Station.

Further, the occupant of the house who informed police about the location of the rifle handed over to Richards EC$3,200 saying the money was from the sale of a firearm stolen from the police station.

The occupant of the house further took police to the home of a 17-year-old student, saying that some of the ammunition that came from King was being kept there.

The student was not at home, but the police received permission to search the student’s bedroom, and they recovered seven magazines, each loaded with 15 rounds of .40 ammunition, amounting to 305 rounds.

King, the man who gave the information about the firearm in the cemetery, as well as the student, were arrested and taken to the MCU headquarters in Kingstown.

While at MCUHQ, King asked to speak to Richards, and told the investigation, under caution, that the person who gave officers the information about the firearm buried in the cemetery had given him (King) EC$3,200 from the sale of a firearm.

From that amount, King gave EC$3,000 to the person whom he said had handed the firearms and ammunition to him at the police station.

That person, in turn, gave King EC$150, the prosecutor told the court.

Based on the information gathered from King and the other suspects, the police went to Calliaqua, where they arrested the man who King said had given him the guns at the Georgetown Police Station.

The man handed over to police EC$2,200 in cash, and one black Airmax shoe, which he said he had bought with the money given to him by King.

Later that same day, officers from the MCU went to Layou, where police retrieved a Glock pistol serial number NLN 144 along with 15 rounds of ammunition.

On hearing this, the chief magistrate asked if the person from whom the weapon was collected had not been charged.
Cato then informed the court that the person was an informant.

On June 18, the 17-year-old student gave police a caution statement about the ammunition and was discharged pending further investigation.

On June 19, about 10 a.m., Richards took the firearms and ammunition to the Special Patrol Base in Ottley Hall, where Station Sergeant, Julian Cain, a firearms examiner certified that the firearms were in good working order and that the ammunition was live.

Cato told the court that the police investigation revealed that no one gave King authority to enter the Georgetown Police Station after closing hours.

King has pleaded guilty to the following charges:

· that between June 1 and 14, 2021, at Georgetown, he entered the Georgetown Police Station as a trespasser to commit an offence, to wit, theft;

· that between June 2 and 18, 2021, at Diamonds, he, Latham and Dublin had in their possession criminal property, to wit, EC$3,200 in cash, which they knew or suspected in whole or in part directly or indirectly represents the proceed of criminal conduct;

· that on June 17, at Diamonds, he, Latham and Dublin had in their possession 305 rounds of ammunition without a licence issued under the Firearms Act;

· that between June 2 and 17, 2021, at Sion Hill, he, Latham and Dublin not being licensed firearm dealers, sold one magazine with 15 rounds of .40mm ammunition to one “Pet”, of Sion Hill;

·  that on June 17, 2021, at Kingstown, not being licensed firearm dealers, he, Latham and Dublin sold one magazine with 15 rounds of .40mm ammunition to Myron Samuel, of Layou;

·  that between June 1 and 4, 2021, at Georgetown, he and Latham had in their possession, one M-4 rifle, serial number W877775, a prohibited weapon, without the authorisation of the minister;

· that between June 1 and 18, 2021, at Georgetown, he and Latham had in their possession one Glock pistol, serial number LNL151, without a licence issued under the Firearms Act;

· that between June 1 and 28, 2021, at Georgetown, he and Latham had in their possession, one Glock pistol, serial number LNL144, without a licence issued under the Firearms Act; and,

·  that between June 1 and June 18, 2021, at Georgetown, he and Latham had in their possession one Glock 22 pistol, serial number LNL155, without a licence issued under the Firearms Act.

Update: This article was updates to correct the number of charges for which King had pleaded guilty.

2 replies on “Defendant says guns, ammo were handed to him at G’town Police Station”