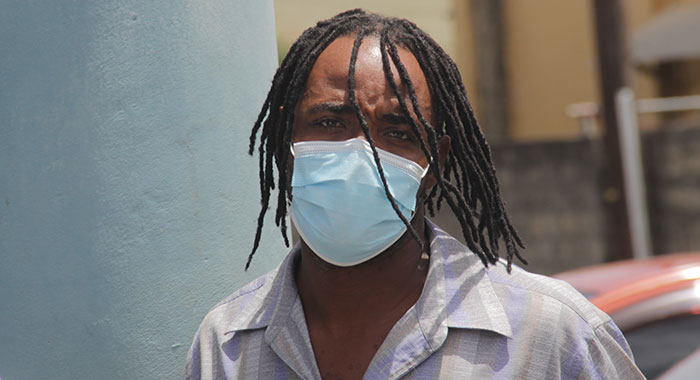 Darnley Porter will spend the next 19 months in prison. (iWN photo)

An Ottley Hall man was, on Monday, jailed for 17 months for inflicting actual bodily harm on his wife and two of their three minor children, and 19 months for wounding another of the children

Darnley Porter, a 36-year-old “retired mason” would, however, only serve the longer of the sentences, as they run concurrently.

He pleaded guilty to charges that on July 16, at Ottley Hall, he assaulted his wife, Linda Porter, a 39-year-old vendor, causing actual bodily harm.

He further pleaded guilty to charges that on the same day, he assaulted his 14-year-old daughter, causing actual bodily harm and committed the same offences against his son, who is 9 years old.

Porter further told the court that he was guilty of a charge that on the same date and place he unlawfully and maliciously wounded his daughter, who is 12 years old.

According to the facts, read by Corporal Atnel Ash, Mrs, Porter and her husband were in a 21-year relationship, which included 11 years of marriage.

The couple has been separated and has been living apart for the past 24 months.

Mr. Porter left his wife’s house and went to his home and later returned and began arguing with her, saying that someone had removed a sensor light from outside of his house.

He accused his wife’s brother of removing the sensor light and proceeded to call his wife ill names.

Mr. Porter then pushed his wife onto a cardboard and kicked her in the stomach, causing her to lose control of her bladder.

The three children went to their mother’s assistance and held on to their father.

He pushed and boxed his 14-year-old daughter in the mouth, and pushed both of the girls out of the bedroom.

Mr. Porter then took a cutlass from under the bed and swung it at his wife’s face. The cutlass missed his wife and struck their couple’s 9-year-old son on the head.

The couple’s daughter re-entered the bedroom and grabbed onto their father.

Mrs. Porter ran out of the bedroom and Mr. Porter followed her and she jumped through a window.

The older of their daughters went into her bedroom and began speaking to her grandmother on the telephone.

Mr. Porter entered the bedroom and slapped his daughter on both sides of her face with his hand.

The matter was reported to the police and detective Constable 986 Ottley and a party of officers from the Criminal Investigation Department responded to the report and conducted investigations.

Mr. Porter gave no statement. He was later charged.

When Chief Magistrate Rechanne Browne asked Mr. Porter at the Serious Offences Court, on Monday, if he had anything to say in mitigation, he said no.

When the complainants appeared before the court, Mrs. Porter told the court that their son had gone to school for an assessment.

“I know that,” the defendant responded.

“What a beautiful wife,” Browne further said, and Porter again said that he knew.

The chief magistrate asked him if he knew that on the day of the incident.

Mr. Porter then told the court that he had been drinking.

“And the spirit took over?” the chief magistrate asked.

Asked how she was feeling, Mrs. Porter said, “not too bad”.

She added that she had thought the matter over and had forgiven her husband, but would like a restraining order.

Browne said that her court does not issue a restraining order.

The chief magistrate commented that she was certain that it was not the first time that Mr. Porter had abused his family members.

Mrs. Porter said that it is something that he always does.

The magistrate noted that the older daughter was hiding behind her sister.

“She is particularly fearful — hiding behind the other one.”

The chief magistrate asked Mrs. Porter if she had noticed her children’s demeanour and she said yes.

The chief magistrate stood the matter down for a few hours then imposed the prison sentences on Mr. Porter towards the end of the day’s proceedings.