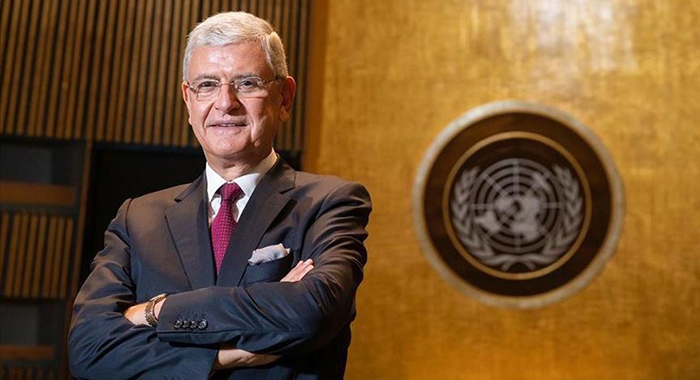 The President of the 75th session of the United Nations General Assembly will embark on a “mission drive” to the volcano Red/Orange Zone during a visit to St. Vincent and the Grenadines this month.

During his trip Volkan Bozkır — a Turkish diplomat and politician — will also meet with Governor General Dame Susan Dougan and Prime Minister Ralph Gonsalves as well as the cabinet ministers.

Some 22,000 persons were displaced and about 2,000 of them still remain in public shelters as a result of the eruption.

Bozkır’s visit to SVG is part of a tri-nation visit to the eastern Caribbean from July 22 to 28.

He will also visit Antigua and Barbuda, and Barbados.

This trip will mark the first visit of a sitting president of the UN General Assembly to SVG and Barbados.

Bozkır trip to the eastern Caribbean — his first to small island developing states (SIDS) — will highlight the structural and developmental challenges affecting these UN member states, as well their efforts to innovate and build resilience whilst fulfilling their development priorities.

One particular focus of the trip will be the importance of investment in sustainable tourism and the blue economy which will enable SIDS to build back better following extreme climate events, the socio-economic impact of the COVID-19 pandemic; and, in the case of SVG: the recent volcanic eruption.

In Antigua, he will be received by Prime Minister Gaston Browne, and meet bilaterally with Minister of Foreign Affairs Chet Greene.

He will also meet with Molwyn Joseph, minister of environment and health, Dean Jonas, minister of social transformation and blue economy; and Asot Michael, minister of tourism.

In Barbados, the president of the general assembly will meet the acting prime minister as well as the ministers of foreign affairs and foreign trade, finance, and climate.

Bozkır will also interact with the United Nations Sub-Regional Team throughout the visit.