PM Gonsalves ‘suffered a concussion’; must be monitored for weeks 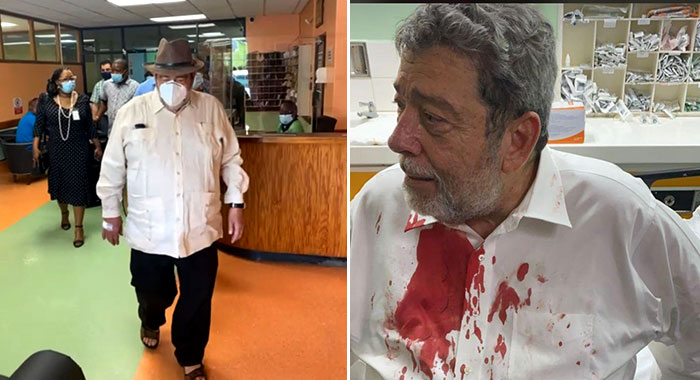 At left: Prime Minister Ralph Gonsalves leaves the Queen Elizabeth Hospital In Barbados, on Friday. He is seen, at right, at the Milton Cato Memorial Hospital on Thursday evening.

Prime Minister Ralph Gonsalves suffered a concussion when he was struck in the head by an object outside Parliament on Thursday, he said on his official Facebook page.

A concussion is a type of traumatic brain injury caused by a bump, blow, or jolt to the head or by a hit to the body that causes the head and brain to move rapidly back and forth, the US Centers for Disease Prevention and Control says.

This sudden movement can cause the brain to bounce around or twist in the skull, creating chemical changes in the brain and sometimes stretching and damaging brain cells, the CDC further states on its website.

On Friday, Gonsalves published a video on his Facebook page showing him, accompanied by his wife, Eloise, leaving the Queen Elizabeth Hospital, in Barbados, where he was taken for a brain scan Thursday night.

In the post, the prime minister said that he could confirm that there are “no neurological deficits” as a result of the injury.
He, however, said that he must be monitored for the next four to six weeks.

Gonsalves, who turns 75 on Sunday, is expected to return to St. Vincent on Saturday, his deputy, Montgomery Daniel, told NBC Radio, Friday morning.

Thursday night, Minister of Local Government Senator Julian Francis told Parliament that a woman was in police custody and had admitted to injuring the prime minister.

He said that the woman wanted to apologise to Gonsalves.

However, on Friday, lawyer Kay Bacchus-Baptiste said on radio that the woman had denied the allegation, and that that had “police intimidated her, oppressed her into admitting” that she had struck the prime minister.

By the grace of God almighty, I am doing well and on the mend. It is confirmed that there are no neurological deficits. However, I have suffered a concussion and must be monitored over the next four to six weeks. But, it could have been far more serious.

I take this assault as not just an injury, but, also look to the intent of the throwing of this projectile at me. The intent was to cause grave harm, even death.

It is equally culpable: the person who threw the stone as are those who instigate and continue to instigate disgraceful events that threaten my life and the lives of others. There is one person whom I hold responsible, and it is not just the person who did the direct act. We can have our disagreements, but, to cross the line into violence is unacceptable in a democratic society.

By all means, exercise your right to protest, but, that gives you no right to do violence toward anyone.

It is the fundamental right of parliamentarians to have access to the parliament in order to discharge their duty. And, it is the right of the people of North Central Windward to have their duly elected representation heard and not denied. I am heartened that Parliament continued their work last night even in my absence.

I would like to thank the hundreds of people who have send their thoughts and prayers and condemned the senseless violence that occurred. I would also like to thank the police officers who sought to protect the right of the voters of North Central Windward to have their voice represented in Parliament. And, of course, to the doctors both in St. Vincent and Barbados in whose good hands saw me through.

7 replies on “PM Gonsalves ‘suffered a concussion’; must be monitored for weeks”