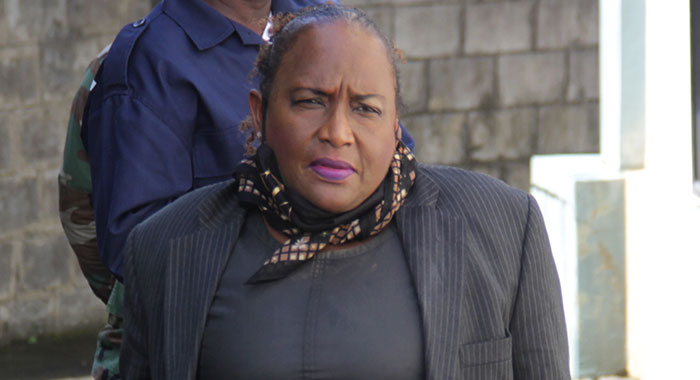 Lawyer Kay Bacchus-Baptiste, on Friday, says that the woman in custody in connection with the injury to Prime Minister Ralph Gonsalves has denied the allegation and has claimed that she was pressured into a confession.

“I understand they have been saying they picked up a woman who is the person who throw the stone and hit Ralph. I am representing the lady and it is not true,” Bacchus-Baptiste said on the New Democratic Party’s New Times radio programme, today (Friday).

“She did not throw a stone but the police intimidated her, oppressed her into admitting that she is the one who hit him, even though she is telling them all she had in her hand was a key ring,” Bacchus-Baptiste said.

“And they are trying to extract a sort of a confession and some story to make it sound as though it was she who did it and she is going to beg Ralph for forgiveness.” Bacchus-Baptiste, a former senator and candidate for the NDP, spoke hours after Minister of Local Government Senator Julian Francis told Parliament that there is video footage of the incident in which the prime minister was injured.

Gonsalves, who turns 75 on Sunday, flew to Barbados Thursday night for further medical attention after he was struck in the head by an object as he walked among protesters toward Parliament around 5:15 p.m., on Thursday.

The police have not issued any statement regarding the detention of anyone in connection with the injuries to Gonsalves, but Francis told legislators that the woman, whom he did not identify, was already in police custody “and begging to go and apologise to Gonsalves.

But Bacchus-Baptiste, who also did not identify her client, said that she was not allowed to meet with the accused woman for over an hour after police took her into custody.

“But I have already instructed her and the police that I am her lawyer and they are not to take any more statements from her unless I am present. I cannot have a lady who did not do an offence go down because they want to say they catch someone.”

The lawyer said that her client told her that the police made her admit to the offence.

“And not only that, I was trying for over an hour to get her. Nobody could tell me where she is until they [were] done taking a statement from her then all of a sudden they could allow me to speak to her. So that statement has no value and I am going to make it very, very clear,” Bacchus-Baptiste said.

“… the lady has said to me that she did not throw a stone. She never even had a stone in her hand. So they need to find the right person. They are not going to take no scapegoat to make the police look efficient in the inefficient way they acted yesterday.”

Asked about the likely outcome of the mater, the lawyer said, “Gonsalves might forgive her.”

Bacchus-Baptiste laughed, adding, “That is in the making.”

The lawyer said that she was at the protest at the time when Gonsalves was injured but did not know about the incident until someone told her about it.

She called for an investigation into the prime minister’s security detail and any lapses that might have led to him being injured.

The lawyer criticised the prime minister’s security detail for allowing the prime minister to walk through the crowd of protesters, saying that they (protesters) had already been riled up by the actions of some officers at the protest.

Meanwhile, Thursday night, opposition lawmaker St. Clair Leacock said that Commissioner of Police Colin John was “irresponsible” for allowing the prime minister to walk through the crowd of protesters.

“… I do not take kindly to the physical injury to the prime minister. But as firmly as I address that regret, that remorse and all of the sincerity, I am saying to you, if I was the commissioner of police today in St. Vincent and the Grenadines, I would not have allowed my prime minister, or the prime minister, to alight his vehicle at the point of the Coreas Trading, where there is an angry crowd, and to walk outside of his vehicle, where he is sheltered and protected, through that crowd into the Parliament building,” said Leacock, who has a military background.

Meanwhile, in his comments Thursday night, Francis suggested that the prime minister might be willing to forgive his assailant. Francis, who is a cousin to the prime minister, warned that while Gonsalves “is a man who does get soft sometimes …I don’t want to see this thing repeated”.