Police raids ‘a very serious moment in our country’ — NDP 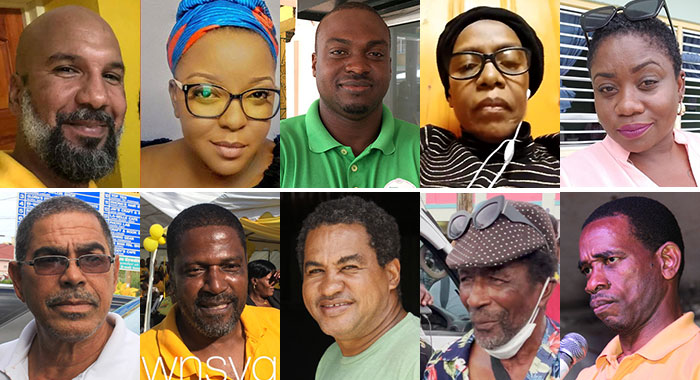 Heavily armed officers from the Rapid Response Unit (“Black Squad”) of the Royal St. Vincent and the Grenadines Police Force were, up to 9 p.m. Saturday, raiding the homes of opposition supporters and other activists.

“This is a very serious moment in our country. What happened today signals a very dangerous course on which the police and the ULP have embarked. What started with ten persons may be more and is nothing more than an attempt to suppress democracy in this country,” Leader of the Opposition Godwin Friday told a New Democratic Party press conference Saturday night.

“Democracy is not a giant conifer, a big mango tree, but a gentle flower that those with big heavy boots are waiting to stamp upon and crush beneath their feet. And when that is done, all of us suffer,” he warned.

Friday said that people must stand up for what is just and right and when forces are arrayed against the people, that is the time for people to stand their ground.

He said that what he had warned about on the streets and in other speeches is now “real, actual” in SVG.

He called on citizens to open “our ears, our hearts, our minds and be willing to do what is just and proper” to defend the principles that they were on the street defending on Thursday.

“Our country depends on it,” Friday said.

Friday told the media that news of the raids came when heavily armed Black Squad officers arrived at the home of Tyrone James, general secretary of the NDP.

James, a retired commandant of the SVG Coast Guard, was not at home at the time, and the police subsequently went back to his home.

Throughout the afternoon, there were raids on the homes of at least 10 people, Friday told the press conference.

Graham later told the press conference that during Friday’s presentation, the NDP was further informed that Igal Adams, an NDP spokesperson, and businessman Douglas De Freitas, owner and manager of NICE Radio, had also each received a visit from the Black Squad.

“The only thing that these people have in common is that they are perceived to be persons who are directly involved in the demonstration in Kingstown last Thursday,” Friday said.

He was referring to the demonstrations in Kingstown, on Thursday, in which several protesters were injured, allegedly by police, and Prime Minister Ralph Gonsalves was injured when he was struck in the head by an object.

Annamay Lewis, of Layou, has been charged with wounding, in connection with the prime minister’s injury and is slated to appear in court on Monday.

Friday said that at the time of the raids and the press conference, there had been no indication that any of the people whose homes were raided had committed any offence.

He said that the warrant for the search of Luzette King’s home said that police were searching for firearms, electronics, ammunition, and documents to conduct an investigation into the offence of unlicensed firearms.

“What began here today is an attempt to suppress the people from coming on the streets of Kingstown to voice their opposition to what is happening, which they are entitled to do,” Friday said.

“Since this has been done today, it is quite clear that the intention that has been signalled all the way from the top … is that they are coming for the people who they perceive as being in the forefront of the demonstration that happened on Thursday,” the opposition leader said.

“We can expect, therefore, that other persons would be on that long list of persons that they have targeted today. This is clearly an attempt to intimidate and to frighten protesters, to frighten Vincentian citizens, nationals who have taken to the street because they are in disagreement with the government, particularly regarding the bill that was passed in the house recently to amend the Public Health Act.”

He said that when the NDP called people onto the streets on Thursday, it was to express their democratic rights.

The opposition leader said that his party has always maintained that protest must be non-violent, within the confines of the law and in line with the best practices of the nation.

He said that this is still and will continue to be the position of the NDP.

“As I have said repeatedly, we do not condone violence in any form; we reject it and reject the violent actions that occurred for a moment within the demonstration Thursday last,” Friday said.

He reiterated concern for people who were injured, including Gonsalves, and wished them a speedy recovery.

Friday said that citizens have a right to express themselves on the streets of Kingstown.

“He said that when citizens elect representatives to Parliament, they still retain the right to take to the street and express themselves directly, if they so choose.

“That is their right,” Friday said, adding that this is the position of the NDP and other people and organisations, including the Public Service Union and the SVG Teachers’ Union that took part in the protest.

He said that people took to the streets to express legitimate concern about the move by the government to remove “voluntary” from a section of the Public Health Act so that it could make COVID-19 vaccination mandatory.

“And that is why the people came out on the streets of Kingstown and they had a legitimate right to do so and do so in a way that elevates our democracy and point out that democracy is not a five-year endeavour for citizens and a day-to-day activity only for those who are elected,” the opposition leader said.

Friday noted that the government passed, on Thursday, the amendment to the law despite the protest, doing so “in the wee hours of the morning, like a thief in the night when many of those who had been on the street expressing concern were asleep.

“They went ahead and passed the bill. Why the intense urgency to get this done? Why could it not have been put off?” Friday asked, noting that the Parliament was postponed last week because of another bill that was passed without debate.

The opposition leader maintained that the passage of the bill takes away people’s right to object to vaccination on any other but medical grounds.

Friday further noted that the ability to object on medical grounds narrowed and has to be approved by the medical officer of health in the first instance and, if the chief medical officer (CMO) is not satisfied, by doctors that the CMO approves.

Friday said that he has repeatedly stated that everyone has a right to choose whether or not to be vaccinated against COVID-19.

He said that he maintains that position notwithstanding his own view that vaccination is vital to ending the pandemic and that he has been vaccinated.

The opposition leader, however, said that everyone must be allowed to choose, as he did.