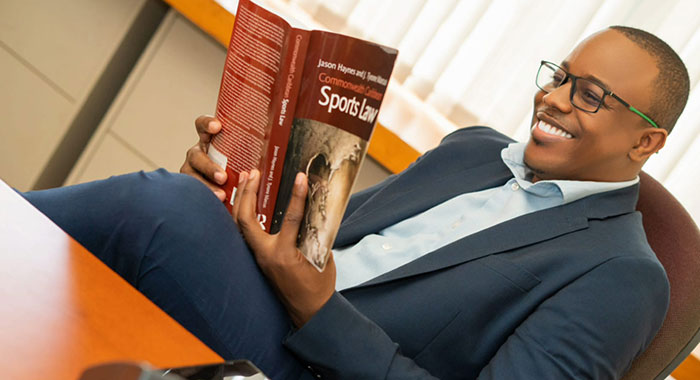 In this continuation of the story of Jason Haynes, PhD, we dive a little bit deeper into the turning points in his life and examine his hopes and aspirations. Jason is undoubtedly intelligent but also incredibly brave for laying his story bare. His hope, like mine is that at least one person is inspired through his sharing.

What has been your most significant accomplishment to date?

“I would say that the national scholarship, Prime Minister’s Award, has been my greatest accomplishment to date, principally because at that time I hadn’t realised my full potential as yet so I hadn’t appreciated that I would be in a position to do well. So my success at the A-level examinations was equally a surprise for me as it was for everyone else. Secondly, I was in such a disenfranchised state in terms of my finances and access to even basic resources that to have accomplished as much as I did in those exams was really a big thing. During those two years at A’ Levels, on a daily basis, I just had enough money to pay the bus, and maybe enough to cover one meal a day (a beef sandwich) at “Tarpi”, the stall at the entrance of the SVG Community College. Outside of the one or two friends who were always willing to share lunch with me, there wasn’t a support system, or any resources available to me for that matter. I didn’t have the books that other people had, and I didn’t have access to the internet. However, I had people like Ms Smith in my corner who would allow me to photocopy her books, and the IT team who would allow me to use the computer lab.

“It was one of those times when I was really low in terms of morale because I didn’t have anything going for me. I remember doing all five of my Cambridge and CAPE A-level exams (law, psychology, sociology, computer science and Caribbean studies), with the exception of communication studies (which I did in Lower 6), in Upper 6. I distinctly remember that, on one occasion, I had five different exam papers in one day, so I had to begin exams at 7:30 a.m. and finish them around 6 p.m. I hadn’t had anything to eat that morning, and after my second exam paper, I fainted. Thankfully, Ms Smith (law lecturer) and Ms Persaud (psychology lecturer) recognised what was happening and bought me lunch that day, and for the remaining examination period. I am happy that these persons were perceptive because I wasn’t going to tell anyone that I didn’t have money for food. It took them recognising that I was struggling. I would forever be indebted to them, and other persons who were there to support me in the difficult times.

“So, for me, that’s why my A’ Level performance was the best thing I’ve achieved so far. There was much competition for the handful of national scholarships at the time, and I was just a nobody from St. Martin’s Secondary School. I saw God move miraculously at that time. The truth is, over time, I’ve maintained my faith, but I don’t think there has ever been another point in my life where my faith has been as strong as at A’ Levels. At that time, I realised that to get through, it would have had to have been only through God’s grace.”

What is your ultimate goal?

“Professionally, one day I hope to be a Court of Appeal Judge. I would like to be able to contribute to our jurisprudence in that way. I want to do my part to create a fairer and just society.

“Separately, I also want to contribute to my community by creating scholarship opportunities for talented young people who are experiencing financial difficulties, and quite simply just being a source of inspiration for people who feel like outcasts, who feel disenfranchised, who feel that success won’t ever happen for them, that they can’t succeed; those are the things I think will bring me the greatest fulfillment.

If you had to give one piece of advice to a young Jason Haynes, what would that be?

“My encouragement to young people who think that they don’t have the potential to succeed, who don’t believe that where they are presently is going to enable them to get to where they want to be … that it is possible. I think that is my watchword… and not just possible in a small way, but I think God wants to do big things for us. Often, we don’t achieve big things because we don’t believe for big things. By ‘big things’, I don’t just mean the house, car, and decent job; those are nice to have, but we must also aim for the ‘big intangibles’ – respect for God, self and others, integrity, humility, concern for the well-being of others, and fairness in our dealings with others.

“Despite my imperfections, I believed and trusted God for things that others felt were beyond my potential. Getting good degrees, scholarships, a decent job, a brilliant wife (Barbadian Rhodes Scholar, Dr. Chloe Walker)… all these things are what I prayed for and believed for. I am grateful that I made a conscious decision to trust God with all areas of my life; that I didn’t take the easy way out; that I didn’t compromise my integrity and faith in search of fleeting success; that I trusted and continue to trust in his providence, even amidst life’s many challenges.”

One reply on “Jason Haynes — a story of grit, determination, immovable faith (Pt 2)”