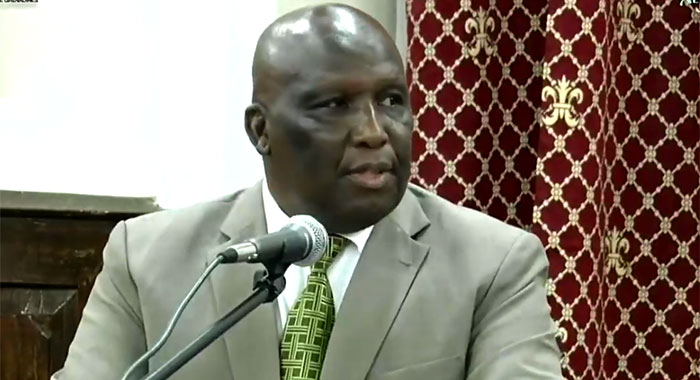 The amended Public Health Act “requires certain frontline workers to be vaccinated” and removes the right to object based on personal belief, but does not violate freedom of conscience, the minister of health has told Parliament.

St. Clair Jimmy Prince said that the amendment was “yet another aspect” of the government’s response to the COVID-19 pandemic, which he said threatens to “derail completely our social and economic situation here in St. Vincent and the Grenadines.

“It is nothing more; it is nothing less,” Prince said of the law, which he presented to lawmakers for approval shortly after 11 p.m. Thursday, after hours of protest, during which Prime Minister Ralph Gonsalves was struck in the head and injured.

“This amendment requires certain frontline workers to be vaccinated in the public interest. Of course, we have been hearing all throughout about rights and whose rights we want to take away. But we are not hearing the other part: whose rights are being infringed as a result of the monopoly which some people think they have on rights,” Prince said.

“I think this is the area that we are trying to zero in on, and that is why, of course, we are talking about frontline people. It is not an attack on the fundamental rights and freedoms of our people, as some opportunistic commentators would have us believe. And it certainly does not violate freedom of conscience. On the contrary, it underpins our duty as a government to protect the wellbeing of our country,” Prince said.

The minister said that the amendment corrects a weakness in the 1977 law that resulted from a change the government made to it last year.

The health minister said that the 2020 amendment to the Public Health Act sought to modernise existing public health legislation to prevent, protect against, control and provide health response to the international spread of disease.

“But, in the implementation of the Public Health Act to prevent control and contain the spread of COVID-19, it was found that the 1977 Act bestowed robust powers on the authorities to suppress the spread of communicable diseases and that the 2020 provision rather weakened this robust nature of the 1977 legislation,” Prince said.

“So some modification had to be made, hence the proposed amendments that we are bringing to the House today,” he lawmakers, who went on to pass the amendment shortly after 3 a.m., without opposition support.

He said that his ministry had gone throughout the country trying to get people to understand that so far, vaccination is the best tool that the country has to fight COVID-19.

He said there are many other areas in which the government had responded to the pandemic, as a responsible government ought to do.

“In all of this, we have respected the rights and freedoms of the Vincentian people. We have not shut down the country. We have not imposed curfews or any state of emergency; in short, we have not been draconian in our actions even as we tried our best to make the country safe during this special period in our history,” the health minister said.

“We have to continue to remind ourselves that COVID-19 is not something to be sniffed at. It is something that has closed down the entire world and we, in St. Vincent and the Grenadines, in small island developing states, we are vulnerable, in fact more vulnerable than most. And for all kinds of reasons, some obvious, some we have to dig deep to understand.”

The minister pointed out that the old section of the law allowed a person to be exempted from an order for medical examination by a medical practitioner and an order requiring that person who has a communicable disease to place himself under the care and treatment of a medical practitioner who is acceptable to a health officer.

The new section also gives the chief medical officer power to require the person claiming an exemption to submit to an examination by one or more medical practitioners to determine whether the person should be granted the exemption on the medical ground or ground stipulated.

“This, of course, is to prevent certificate peddling. And we know the social realities of St. Vincent and the Grenadines, that somebody who doesn’t want to take a vaccine or to be tested goes to a medical practitioner somewhere and says, ‘Listen, I need a certificate to say that I have a problem and I ought not to take that particular vaccine. It would not be so easy because it would be a panel of doctors who would look over that, after the medical officer of health has seen it,” Prince said.

The minister said that the law will “go a long way in tidying up the Public Health Act.  It will give us the leverage we need to better respond to the COVID-19 scourge and put us on a better path to normalcy.

Prince said that it is the job of the government to protect the wellbeing of the country.

“We have to keep people safe and we have to ensure that their workplaces are safe for those people who want to work in those areas.

“Vaccination is still the best tool in our fight against this pandemic and I am encouraging and taking the opportunity at this point to encourage all of us, especially the frontline workers to take the vaccine to protect yourself and your fellowmen and women.

“The vaccine is safe, it is available, it is free and it works. The science has shown that. Do not be side-tracked by the misinformation, the disinformation, the conspiracy theories which are being peddled both by people who should know better and those who don’t know better,” Prince said.

“These three have combined to wreak havoc on the minds of people who ought to be protecting themselves and protecting their lives and their livelihoods here in St. Vincent and the Grenadines, and, indeed, in the Caribbean. And I don’t think we are unique in that regard,” he told Parliament.