SVG gov’t says it has no mandatory vaccination policy 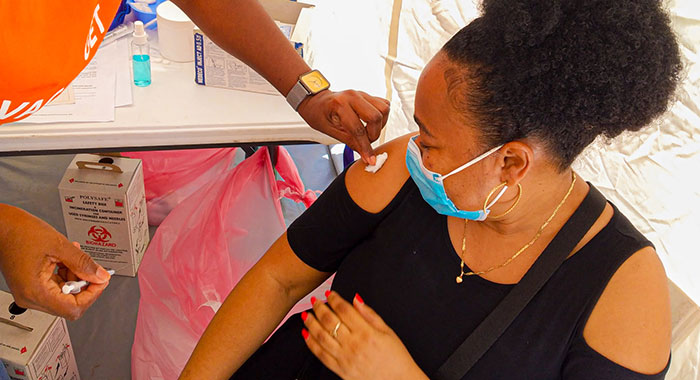 A woman receives a COVID-19 vaccine at the Calliaqua Playing Field on March 7, 2021. (Photo: SVG Health/Facebook)

KINGSTOWN, St. Vincent  (CMC) — The St. Vincent and the Grenadines government Friday said it does not have a policy of mandatory or compulsory vaccination against the coronavirus (COVID-19) pandemic but that it intends to make rules under the existing Public Health Act.

In a statement issued by the Office of the Prime Minister, it said that it intends to offer the choice to get vaccinated to frontline workers, including doctors, nurses, police and prison officers as well as employees at the airports and seaports, including Customs and Immigration officers

“If the employee fails and/or refuses to comply with the requirement for those specific jobs, he or she is free to choose employment elsewhere.  Such a failure/refusal may constitute misconduct,” the statement said.

The government said it was issuing the statement as it made it clear “contrary to what some misguided, ill-informed or politically-jaundiced persons have argued, there are several provisions in the Constitution of St. Vincent and the Grenadines which permit a requirement for vaccination against COVID-19 for particular jobs or jobs generally.

The statement said that other central government employees and those in public enterprises who are not “front-line” workers, who are not fully vaccinated will be required to take the PCR test every two weeks.

“The employer (the State) will provide the first two tests free of charge; the subsequent tests will be paid for by the employee.  If for any reason a vaccinated public sector worker requires a test, for whatever reason, the test will be provided free of cost.”

But the Ralph Gonsalves administration noted that despite the non-mandatory nature of the government’s policy, it should be made clear that the Constitution, the common law, and statute law permit mandatory or compulsory vaccination in the interest of public health and general public interest, especially during a very risky pandemic or public health emergency.

“In the extant factual circumstances of the pandemic, the legal tests touching and concerning ‘reasonable requirement’, ‘reasonably justifiable in a democratic society’, inclusive of ‘proportionality’, are easily passed by the State.

“In these circumstances, the Courts have always accepted established science and facts — not conspiratorial myths — on the vaccines and have balanced any conflicting rights in favour of public health and public interest as advanced by the State as employer,” the statement said, adding that the legal exceptions to mandatory vaccination have been recognised as fact-based “medical exemptions” and “religious exemptions”.

The government also disclosed that on Wednesday, at a meeting of the leaders of the Organisation of Eastern Caribbean States (OECS) of which SVG  is a member, legal advice was tendered by the former president of the Caribbean Court of Justice (CCJ), Sir Denis Byron, the Pro Vice Chancellor at the University of the West Indies (UWI), Professor Rose-Marie Belle-Antoine.

It said that the legal advice “squares with the articulated position of the government of St. Vincent and the Grenadines.

“Both the common law and statute law justify the private sector employers adopting a similar stance on this matter as the government,” the statement said.

The government said that it continues to promote the necessity and desirability of vaccination as a vital tool against COVID-19 and in this regard, it is at one with the stance of the World Health Organisation (WHO) and the position of all 193 member-countries of the United Nations.

The lengthy government statement noted that a requirement for vaccination does not demand a declaration of a state of emergency under the Constitution.

“Indeed, statute law, an Act of Parliament or appropriate Rules made under an Act, suffices, so long as the Act or Rules are not unconstitutional,” the government said, reminding the population that last year, a Public Health Emergency was declared here under the Public Health Act because of the serious COVID-19 pandemic.

“This is a critical context. Across the world, the Caribbean, USA, Canada, Australia, Europe, etc., the Law Courts have upheld vaccination mandates as valid requirements for jobs general or specific, public or private sector,” according to the statement, outlining some “relevant provisions” of the SVG Constitution.