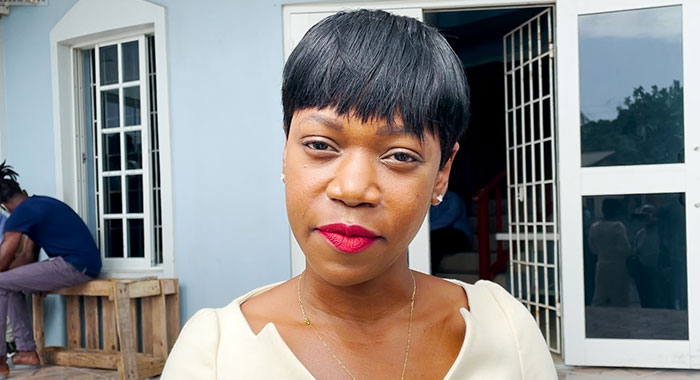 Government senator, lawyer Ashelle Morgan, who is charged with assaulting Diamond businessman Cornelius John with intent to wound him, says she has found herself “in this situation because of my desire to combat the problem of domestic violence and abuse”.

Morgan, however, said that while “malicious forces at play have overshadowed this aspect of the story and are attempting to ruin the reputation and the career that I have tried so hard to build”, she will “not stop attempting to improve the lives of others”.

Morgan told iWitness News, today (Tuesday), that she had reserved her rights to comment and interact with the media before, “because I had assumed that anything that I said would have been misconstrued, twisted, or sensationalised”.

She said that public reporting had illustrated this and she was making her comment “at the risk of my reputation being ruined even further”.

Morgan spoke to iWitness News while in the company of her lawyer, Duane Daniel, outside the Calliaqua Magistrate’s Court, on Tuesday.

Nelson and Morgan are to be tried, on Aug. 28, at the Mesopotamia Magistrate’s Court, in a joint trial, on separate charges, relating to an April 13 incident at Diamond, in which John was shot in the left leg.

John is charged with one count of using threatening language at Morgan and two counts of the same offences, allegedly perpetrated against his wife, Nicole John.

Calliaqua Magistrate Zoila Ellis-Browne recused herself from presiding over the trials, saying that Morgan is her family lawyer.

The magistrate transferred the charges against John to the Biabou Magistrate’s Court, on Aug. 20.

Daniel and Marks declined to comment on the charges against their clients.

“I have never commented to the press on anything in my life. I don’t intend to start now,” Daniel told iWitness News.

Marks, when asked if he had any comments about the charges against his client, said, “Not at this time. The matter is sub judice, so no.”

Meanwhile Morgan had secured one month’s leave of absence from Parliament, after she was charged on June 23.

She told iWitness News today, that the new date for her trial would necessitate an application for extension of that leave.

Parliament is next slated to meet on Sept. 9.

Meanwhile, ahead of Tuesday’s court appearance, John told iWitness News that “things getting reasonable” after his injury.

He said that the injured leg “get plenty pain and swelling inside it”.

John said that he had gone back to his farming and block making, “trying a little thing” and that things were “reasonable”.

John said that he was looking forward to his trial.

“Every day, expectation and prepare for disappointment also,” he told iWitness News.

“In life I does say I prepare for the unexpected. Not everything work out how you plan it or how you would like it to go. So you always have to left a room for that,” John said.

“I had previously reserved my rights to comment and interact with the media before now because I had assumed that anything that I said would have been misconstrued, twisted or sensationalised. Public reporting illustrates this very much, but, at the risk of my reputation being ruined even further, I would have this to say:

“I have faith in the justice system and I am confident that justice will prevail. I have found myself in this situation due to my intrinsic desire to help and empower women, especially women who ask for my assistance and because of my desire to combat the problem of domestic violence and abuse — gender-based violence and abuse — in our communities. It’s very disappointing that forces, malicious forces at play, have overshadowed this aspect of the story and are attempting to ruin the reputation and the career that I have tried so hard to build. Nevertheless, I will not stop attempting to improve the lives of others.”