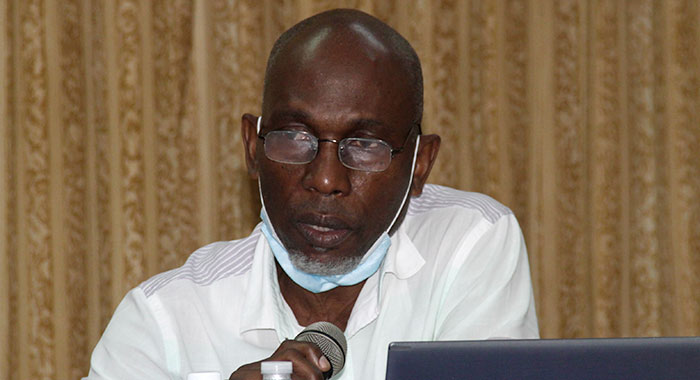 The position by Commissioner of Police Colin John regarding protest near the Parliament Building, in Kingstown “flies in the face of the last 70 years of political history in St. Vincent and the Grenadines”, says a lawyer for the main public sector unions.

“… people, organisations, whether they are trade unions or political parties or pressure groups or whatever, had always had as its desire to come to the centre of Kingstown and participate in legitimate protest,” Jomo Thomas told a joint press conference of the Teachers’ Union, the Public Service Union, and Rise Hairouna, a civil society organisation, on Tuesday.

Thomas noted that the PSU had given notice to the police commissioner who, in essence, denied permission to hold the protest/demonstration in front of the market, located across the street from the Parliament building.

The lawyer noted that the police chief, after speaking to the Public Service Act, concluded:

“As commissioner, I cannot usurp the authority that was granted to me by parliament and authorise your Organisation or anyone to breech (sic) the law. Furthermore, the route proposed is; if granted, would at some point contravene the specified distance, specified time section of the law.”

Thomas said that in response, his chambers analysed the Public Order Act and told the police chief that he was not having a proper appreciation for and had been misapplying the act.

In their final paragraph to the commissioner, Thomas’ chambers told the police chief, “Taken together, your instructions and or orders as per the notification of the Public Service Union amounts to a misapplication of the Public Order Act and flies in the face of the constitutional protections accorded to citizens of our country.”

Thomas told the press conference that the Public Order Act allows for time, place and manner restrictions on processions and demonstrations.

“But the application, the interpretation which the commissioner of police renders the act, is such a strict constructionist approach to understanding the law that what he concludes is clearly a misunderstanding of the law. So, for example, he says that what he is doing is in an effort to preserve good order and public safety. Now, evidently, he is presuming that this protest is going to be disorderly.”

The lawyer said that in the instances of protest, the responsibility of the police, in light of their mantra to protect and serve, is to protect public safety and those who participate in the protest.

“And even when there is a parliamentary sitting, it is improper for the commissioner of police to conclude that in his application of the law, that he will be usurping his authority granted to him by Parliament to say that to allow for the participation of protesters in front of the Parliament.”

Parliament was initially scheduled to meet on Thursday, but Prime Minister Ralph Gonsalves announced last Friday that it would meet on Sept. 30.

Thomas noted the decades-old history of protest in Kingstown.

“So, what is this notion now that in 2021, when we are supposed to be broadening our democratic best practices, we are now curtailing on the rights of people to participate and to demonstrate their fundamentally protected right to assembly and protest?”

Thomas suggested that the police chief, who is a lawyer and former prosecutor, should have spoken to the attorney general about the interpretation of the law and how it is to be applied, in keeping with the Constitution.

“Leaders may disagree with that; the police high command may disagree with that but in a democratic society, let the ideas contend. But, certainly, you cannot take an adversarial position, anticipating that an activity of public workers will be rowdy and disorderly and therefore, you are trying to prohibit it,” Thomas said.

On Wednesday, the union again applied for permission to hold the protest, noting that neither Parliament nor the High Court would be in session.

The police chief granted permission for the protest.