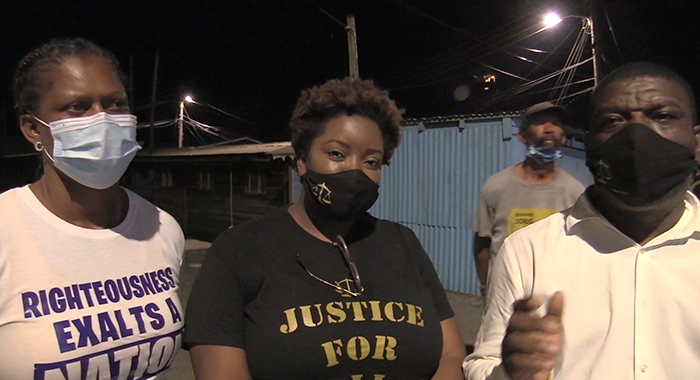 Activist and teacher Adriana King, 41, is slated to appear before the Kingstown Magistrate’s Court, today (Friday) to answer to a charge that she obstructed Prime Minister Ralph Gonsalves while he was going to Parliament on Aug. 5.

King was released on station bail around 8:30 p.m. Thursday night, several hours after being arrested during a protest in Kingstown.

The charge Thursday night brings to six the number of charges brought against King as a result of her alleged involvement in protests in Kingstown in July and August.

She was charged “For that on the 5th day of August, 2021, at Kingstown in St. Vincent and the Grenadines and in the first magisterial district being a stranger did obstruct Mr. Ralph Gonsalves, Prime Ministers, a member of the House of Assembly from going to the precincts of the House.”

The charge has been brought under section 25 (a) of the House of Assembly Privileges, Powers and Immunities Act.

King is already on bail and awaiting trail, and has been suspended from work on half-pay, on charges that she was concerned in organising protests in Kingstown on July 29 and Aug. 5 without informing the commissioner of police 24 hours prior, and allegedly taking part in those protests — which police have deemed illegal.

Thursday night, Israel Bruce, one of King’s lawyers, dismissed the charges as intending to intimidate would-be protesters at a time when there are ongoing protests against the government and its COVID-19 vaccination policy.

King was released from custody at the same time as Robert “Patches” Knight/King and John Mofford, who were also charged with organising and taking part in the protest in July and August.

They, too, are to appear in court this morning.

Five other persons have been slapped with charges in connection with organising and taking part in the protest.

Gonsalves was injured on Aug. 5 as he walked among protesters on his way to Parliament around 5 p.m.

The 75-year-old leader was struck in the head by an object and was flown to Barbados for medical attention.