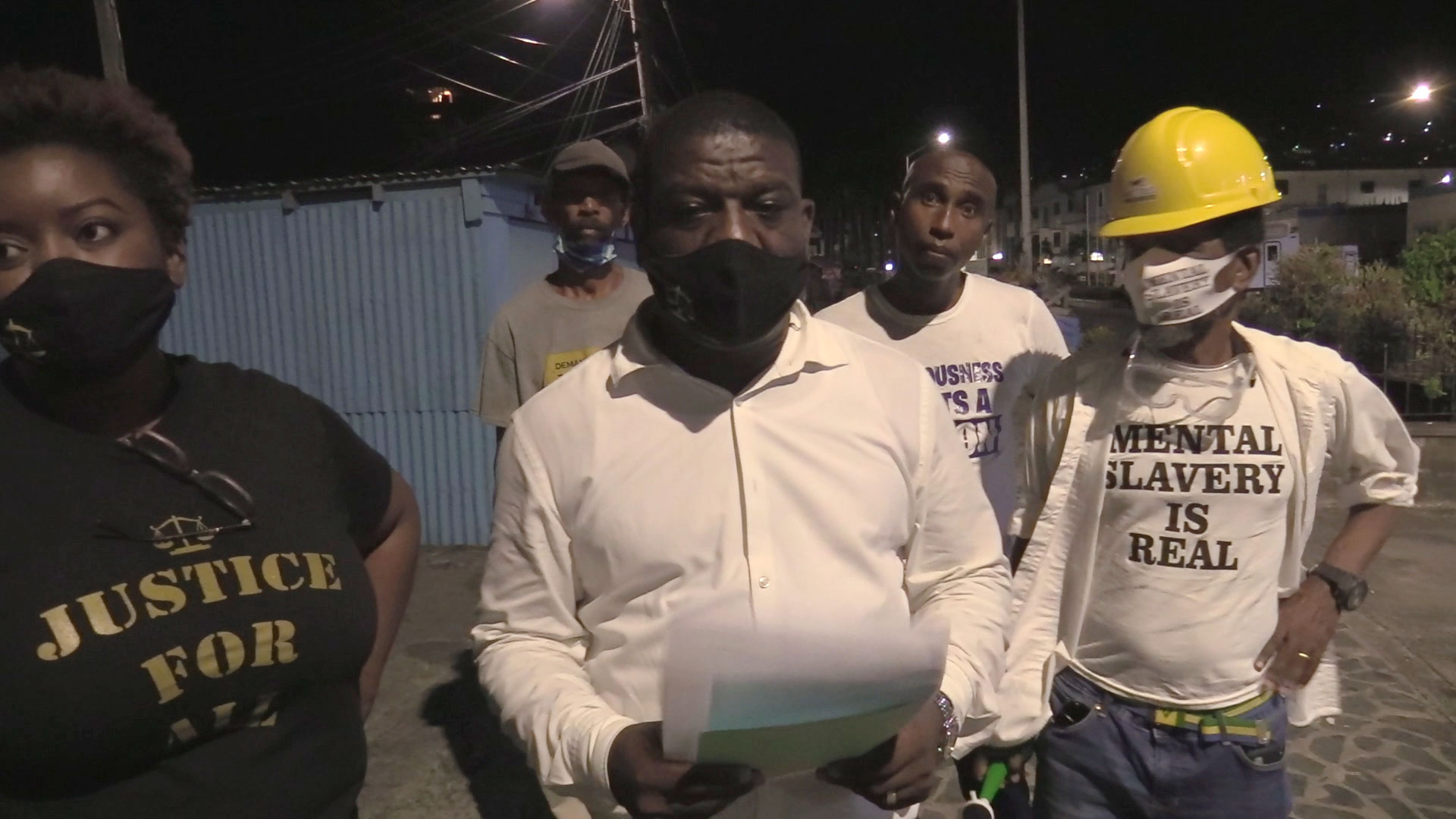 Two more people were, on Thursday, slapped with protest-related charges, bringing to eight the number of persons charged with unlawfully organising and participating in demonstrations in Kingstown in July and August.

Lawyer Israel Bruce told iWitness News outside police headquarters around 8:30 p.m. Thursday, that Robert “Patches” Knights/King, a calypsonian and opposition activist and John Mofford were slapped with four charges each.

They were each charged that on July 29 and Aug. 5, in Kingstown, they did organise or were concerned with organising a public procession, without notifying the Commissioner of Police at least 24 hours prior.

They were each further charged that on the same dates, also in Kingstown, they did knowingly take part in a public procession or meeting, in contravention of the Section 5(1) and Section 5(2) of the Public Order Act.

Knights/King and Mofford were granted station bail at the Criminal Investigations Department in Kingstown, hours after they were taken into custody while participating in a protest in the city Thursday afternoon.

They have been ordered to appear before the Kingstown Magistrate this morning (Friday), to answer to the charges.

The other accused each pleaded not guilty at their arraignments and are awaiting trial on the matter.

Bruce told iWitness News that the charges against his clients are intended to intimidate.

“Well, I have said it before and I’ll say it again. And I want the region of the world to hear us loud and clear that there is one obvious agenda by the government of St. Vincent and Grenadines led by Dr. Ralph E. Gonsalves and his cohorts: that the ultimate objective is to seek to engender fear in the minds bodies and souls of the people of St. Vincent and Grenadines. But these people are not going to be scare mongered.

“So I say to the government, the quicker you stop, the more sense you will make, because none of these four people are likely to be engaged, or to be scared as a result of your behaviour.”

Over the past few months, protests have been held in Kingstown to highlight a number of issues, including showing objection to changes to the Public Health Act, which makes vaccines mandatory for certain categories of public sector workers.

Bruce, who is also an NDP senator, said that some of the people who have been brought before the court had campaigned strongly against the NDP administration on behalf of the then opposition Unity Labour Party in 2000, which was elected to office in March 2001 in early elections forced by the protests.

“I mean, think about Mr. John Mofford. John was one of those persons who worked tirelessly, feverishly to ensure that he did everything in this country to get the ULP elected into office.

“He’s one of those persons who is now asking the ULP to leave because I’m tired of what has happened over the last 20 years.”

“Same here,” said Adriana, who, like Mofford, was standing near the lawyer as he spoke with iWitness News.

“You heard Mr. Joe Da Silva last Friday, saying that the only protest that he has ever been involved in or concerned with was the protests of the year 2000 when he blocked the road at Highway Trading, and he burnt tyres at Highway Trading. Those are the guys who are now being charged.

“But I say to this government, that the people of this country will not be beaten on the altar of political sacrifice, they will stand up for what they believe in, and no amount of charging these decent people of this country are going to scare them from participating in protestation and standing up for what they believe in. democracy must stand solidly,” Bruce said.

He noted that the charges have been brought under a 1951 law.

“I want and I encourage and advise the people of this country and region to pay attention to that piece of [legislation] and see how prehistoric it is, pre-independence, pre-constitution and archaic. That is a piece of legislation that is being used amidst the necessary amendments that are made along the way.

“That is a piece of legislation that’s being used today by a so-called progressive government  — 1951 with minor adjustments along the way to punish or to seek to pressure the people of this country. That will not prevail,” the lawyer said.