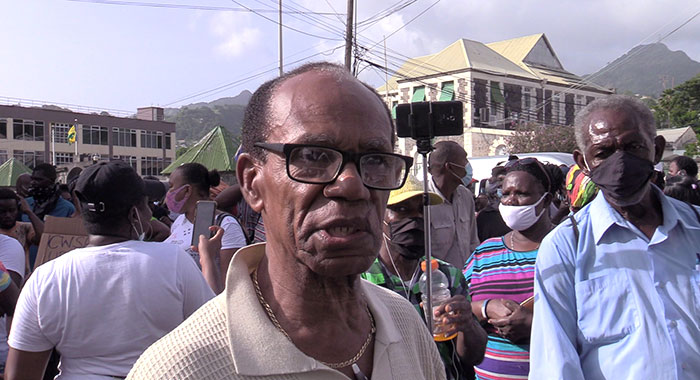 A former activist for the ruling Unity Labour Party (ULP) says that the administration’s COVID-19 mandate and its attitude towards protesters will force the party into opposition for “another hundred years”.

Frank Da Silva, a one-time supporter of the main opposition New Democratic Party, threw his support behind the ULP in 2015 and emerged as the party’s main communications hatchet man in the five years thereafter.

However, Da Silva and the ULP fell out last year over the coronavirus pandemic, and he no longer hosts programmes on the party’s radio station, Star FM.

Da Silva was among protesters in Kingstown, on Thursday, where the Public Service Union and the NDP held demonstrations against the government’s COVID-19 vaccine mandate.

On Aug. 6, hours after a protest in which Prime Minister Ralph Gonsalves was struck in the head and injured, lawmakers passed, without opposition support, changes to the Public Health Law, mandating vaccines for certain categories of workers.

A change to the Medical Officer’s Act will allow doctors specially selected by the State to determine whether a person for whom vaccination is required should be exempted on medical grounds.

“Look at something, these people don’t learn. Why the Labour Party was out of power for how long until they get to join up with some other group? You know why? Because of the stupidness like this that was going on.

“Then NDP got in there and start to do stupidness. What happened? How is it that that these guys don’t learn? The ULP is going down the same road of Labour Party before and Mitchell. Well, once the next election is called, they better get rid of the name ‘ULP’ because it would take them another hundred years to get back in office. It is stupid; it is dumb politics to be doing this,” Da Silva told iWitness News at the protest.

“Listen, when you are doing wrong, it doesn’t matter to me. Wrong is wrong,” Da Silva told iWitness News, when asked about his relationship with the ULP.

“I used to criticise [then Prime Minister James] Mitchell.  You remember the Ottley Hall thing? Almost all the documents that Mr. Maraj got, I gave it to him.

“You remember in 2011 the [the NDP] filed something in their (the court) against Ralph? Who stopped it?  Me personally stopped it. The tale of two tapes. Go look for it. So, you see this has nothing to do with friend. Wrong is wrong. When you are right, I going say you are right, and when you’re wrong, I’m gonna be merciless. Merciless!” Da Silva said.

Da Silva said that COVID-19 vaccine should not be made mandatory because there is no information on their long-term effects.

“In Israel, they are now talking about vaccines number four; jab number 4.  How could anybody want to force anybody to take jab number one, when they have no clue what this vaccines is gonna do to you? None!” Da Silva said.

“The Israeli — they’re calling him the czar — saying they need a fourth jab in Israel. The fourth one! Look it there. How many the people gonna buy for the people in St. Vincent and the Grenadines. This is bulls**t,” Da Silva said, pointing to a copy of an international news story on the situation in Israel.

“When it comes to wrong, I don’t ha’ no side.  This is f**g*** wrong. What’s going on here is nothing but bulls**t. And I want Ralph Gonsalves to hear me,” Da Silva said, pointing a row of police officers who had lined across the street, blocking pedestrian and vehicular traffic.

“Ralph Gonsalves brags about his behaviour in Jamaica at the UWI. So what he doing here?” Da Silva said.

He was referring to the student protest that Gonsalves, 75, led in Kingston five decades ago, which he has said was the beginning of his political career.

“Ralph Gonsalves said he led a protest, went around the police barricade, violated that in Jamaica to protest. So what he doing now? What’s he doing now?

“He’s embarrassing me, frankly … because I stood up for this man over and over again. And he ought not to be doing this. It’s just simply wrong. Period. Pull it back. Do like what James Mitchell did [in 2000].

“When people come out in the street, he called printery and shred the document and told the governor general he ain’t sending it. It done,” Da Silva said.

He was referring to Mitchell’s scrapping of “The Greedy Bill” — which would have made senators pensionable — after large-scale protests across the country.

“Because there is no reason under the sun for anybody to vaccinate when you have no clue about the long-term effect of this thing here. We know what it is doing now. It’s killing people. Let’s debate the issue. Let’s debate this. Don’t tell me about anti-vaxxer,” Da Silva said.

Medical Director at the Respiratory Hospital in St. Lucia, Dr. Alicia Eugene-Ford said that the two people had “other illnesses”.

“And why they not telling us about anybody in St. Vincent? Apparently, the only place in the world where there has been no adverse effects is St. Vincent and the Grenadines. And I know that is a damn lie,” Da Silva said.

Asked if he knows anyone personally who has had an adverse reaction to a COVID-19 vaccine, Da Silva said:

“Let them tell us about a fella named Buddy James from Central Kingstown. Tell us why he died. I know other people, they not dead, but I know after the vaccine, they sick for 10 days. The person was working for an international company, the person quit. And people know. This thing is just wrong.”

The Ministry of Health has repeatedly said that no one has died in St. Vincent and the Grenadines as a result of the COVID-19 vaccine.

Asked his views about Thursday’s protest in terms of the crowd, the energy and the reaction of the police, Da Silva said:

“Well, listen. You see the police, they claim they are doing their job. My comments are directed to the people who send them to cause trouble because that’s all this is meant to do — cause trouble and Ralph Gonsalves of all persons, should not be doing it.”

iWitness News noted to Da Silva that the prime minister is not the commander of the police.

“Well, call the commissioner — tell the fella cease and desist. Call him. He could call him,” he said.

Gonsalves has repeatedly stated publicly that he does not instruct the Commissioner of Police on policing matters and that he constrains  his interventions with the police chief to policy matters.