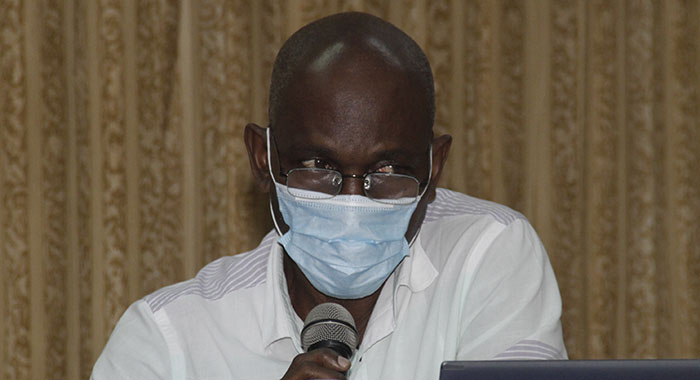 Lawyer Jomo Thomas, an anti-mandatory COVID-19 vaccination advocate, has tested positive for the viral illness and said that he is using the drug Ivermectin as part of his treatment.

Thomas made the disclosure, on Boom FM, on Tuesday, during his weekday appearance on the radio station.

The former house speaker expressed confidence that he would recover from the illness.

“Look, it’s the luck of the draw. Over 2,000 people in St. Vincent have gotten it. I have become part of that number. Hopefully, all of us who get it from here on in will survive.

He said he went to the hospital on Monday “and I was diagnosed positive with COVID, so I am supposed to get another confirmation today and then we will go from there.

“I am sure that I would do the best in the circumstances. I am not overly concerned,” Thomas said.

“I am feeling alright. There is a slight temperature, fluctuating, but I am doing what I have been doing for years so I am hoping that all will be well. I take my vitamins, I do my exercise, I eat properly, so I am pretty sure that I am gonna be well,” said Thomas, who is an avid jogger.

Asked where he thinks he might have contracted COVID, Thomas said it was difficult to say.

“But in the last week, I didn’t spend much time on the street. It could have been Thursday but I don’t want to say Thursday because I probably may be saying something that may not necessarily be correct.”

Thomas, whose law chambers represents the St. Vincent and the Grenadines Teachers Union and the Public Service Union, said he was at the protest which the PSU organised in Kingstown, on Thursday, as it continued to register its objection to mandatory COVID-19 vaccination for certain categories of public sector workers.

He said he wore a mask at the protest, but at one point went up the street and forgot his mask.

“And I didn’t stay very long.  But it doesn’t take a long time for any such thing to happen.”

Thomas has said that he would not, as yet, take any of the COVID-19 vaccines available in SVG.

Thomas said that now that he has tested positive for COVID-19, “my mindset has not changed in the least. I don’t know what would be a basis for a change in mindset.

“I haven’t had any positions that is — I don’t think that I have held any position that is outlandish, that should cause a rearrangement in my ideas or thoughts or opinion.”

Thomas said he got tested after feeling “unwell” on the weekend.

“There was no pain, there was no anything. And, on Sunday, I thought I should probably drive up to Stubbs and get one of those rapid tests and I didn’t do it. And yesterday when I went in, I decided to go to the casualty and check and it kind of confirmed what I thought.”

Thomas said he did not do much on the weekend, nor did he go to court on Monday.

To the persons he interacted with on Thursday, Thomas said:

“Maybe I would say, out of an abundance of caution, they probably, particularly if they are feeling any kind of feverish feelings, they probably should go and get tested.

Asked if he would take Ivermectin — an anti-parasitic used in both humans and livestock, about which some doctors say there is no conclusive evidence that they work to treat coronavirus — Thomas said:

“I have taken it. I took it first on Saturday and I took it again yesterday. I have been following, across the world, and where top scientists have said that it works and I have no difficulty in following the views of people who know very much more than I do on these matters.”

Thomas countered the argument that the drug is only for use in livestock.

“In 2015, there is a gentleman who won a Nobel Prize in medicine and one of the things on which he did his work was on Ivermectin and it was for Ivermectin for human beings — the way it was used for anti-malarial treatment.

“I even saw a major columnist in St. Vincent talking about Ivermectin in a very narrow sense, because Ivermectin is also used in animals, but it is a different formulation that is used in animals. But it has both human and animal treatment effects. But, in the vulgarisation of it and the effort not to use it, we have seen people talk about it in a very negative fashion. But, I have used it and I feel pretty good,” Thomas said.

He said that he has checked for the drug’s efficacy and composition.

Responding to a comment that he is a guinea pig for another medication that has not been studied for the long-term effects, Thomas said:

“Well, anyone can reach for what they want to reach for. I have never once made a guinea pig argument. I don’t speak in hyperbolic fashion.