A ‘buss head’ and a cause 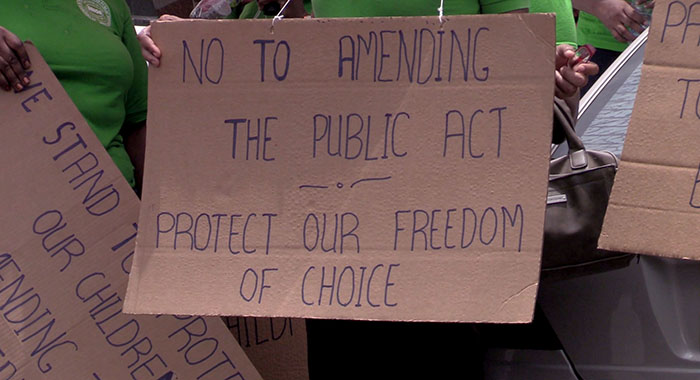 This article was not designed to be politically correct, or to further denounce the injury to the prime minister that happened a while aback. Enough of that has been done, and the time for it has long passed. So, if you are looking for an outpouring of sympathy, this is not that article. This article is meant to encourage sober and honest reflection, and to hopefully nudge perspectives into the rightful direction.

Before Aug. 5, the public health amendment was sharply in focus, after Aug. 5, its importance had faded from the minds of most. The entire protest had been hijacked by its own unforeseen climax—the buss head. That one injury reframed the entire event and overshadowed the real issue, even to this day.

From my eagle’s eye view, I would like to think that I gained a full appreciation for the context, which was, and continues to be overlooked by many in their misplaced condemnation of the protest. The protesters were a diverse blend: an independent, nationalistic organisation, opposition supporters, public servants and even supporters of the governing party. The average person there knew that it was not a matter of whether or not the amendment would be passed on that day. They knew that because of the way that the Parliament membership is configured, and the way that the voting usually goes, that it was destined to be passed. Beneath what some regarded simply as unruly behaviour boiled a strong sense of duty and urgency in the people to stand up and voice their profound disapproval. It was an amendment that the common man clearly felt assaulted their rights and robbed them of certain freedoms.

They knew what the outcome of the vote would be beforehand, and hungered to be able to have some kind of effect or input on this policy, as the true spirit of democracy would have it. They likely thought that their only hope of stopping this bill was to somehow make it difficult for the prime minister to get to the Parliament, in hopes of driving the message home. If this could not show politicians what the will of the people was on that issue, I really don’t know what could. I keep hearing that he was on his way to do the work of the people, but from what I observed I dare say that that amendment was one piece of work that the people did not want done!

While a few may have taken pleasure upon hearing about the prime minister’s injury, that in itself was not the reason for their celebration. It was clear that the people rejoiced because of what they thought that it had accidentally achieved—a postponement to the amendment. They were desperate. Even though a postponement would have only served to delay its eventual passing for a while, they still felt like they had gained some form of victory—they were that desperate to stop it!

Of course, the injury to the prime minister ran the risk of setting a bad precedence for future protests in the country. This point, however, did not warrant the heavy focus that was placed on the wrongfulness of the act, while ignoring what agitated it in the first place. It is quite a shame that the protest was swiftly reduced to some politically-driven event, irrational resistance to some well-intentioned legislation, or a case of people having so much hate for their own prime minister that they sought to harm him.

Vincentians were portrayed to the outside world as senseless and barbaric, which we all know is just not the case. The racket was not without reason. The people were not protesting randomly, or lashing out aimlessly. An accurate account of things demands that it be known that the protest bore a rare unity of people from different segments and persuasions of Vincentian society who came together to fight against a common threat.

While some rattled away about how distasteful it was for him to be injured, very few paid attention to the bigger picture—that the amendment to the public health act that nobody wanted, was now law. The people had been defeated. The only thing that could have been salvaged for Vincentians after this defeat was our reputation. We are not known to be an unruly or violent people. However, it seemed as though the callous narrative peddled with the hyper sensationalised injury of the prime minister was determined to see it that Vincentians go down in history as a nation of hooligans.

If only less attention was given to the act, and more to what led to it, Vincentians could have been taught a lesson far more valuable to civic duty and national pride. A far more righteous cause would have been advanced—one in which the outside world would have likely viewed us in a more honourable light. Do you think that we would be able to look back on this country’s 1935 riots so proudly, had it been demonised the way that the Aug. 5 protest was?

In the grand scheme of things, the event, through the prime minister’s sacrifice, presented a chance for us to paint St. Vincent and the Grenadines in the fitting colours of democracy and patriotism. Not as a bunch of out-of-control hooligans that brought injury to their prime minister’s head at some protest, but as a people willing to go all the way to stand up against a policy that they felt strongly against. Not only would this have fostered a more honourable image of Vincentians, but it would have also represented a more accurate account of what happened in the Aug. 5 protest.

So, for the sake of the greater good, Aug. 5should have been recalled as the day that Vincentians courageously stood up against the odds. A day that they were so determined and vigorous in their efforts to fight for what they believe in, that even the prime minister, despite being heavily guarded, could not remain out of the reaches of their frustrations. Wouldn’t that have made for a far more uplifting narrative than the one that had dominated the media? Doesn’t that sound a whole lot better? Isn’t that more triumphant?

It would have certainly done a lot more for the national pride of Vincentians, not unlike the way that the tales of Joseph Chatoyer’s fierce resistance of the British inspires us now. His resistance wouldn’t nearly have been that fierce, or powerful had it not been for the same brute in man. Though he lost in flesh, he is victorious in spirit, and remains that way in our hearts and minds, so much so that he is now remembered as our national hero—the people’s champion. There could have been a similar effect gained for Vincentians—a nation of champions. Unless we are willing to miss such an opportunity once more, we must seek to understand the brute in man, for it is noble in its own way, and may emerge in you as well to defend what you hold dearest some day.