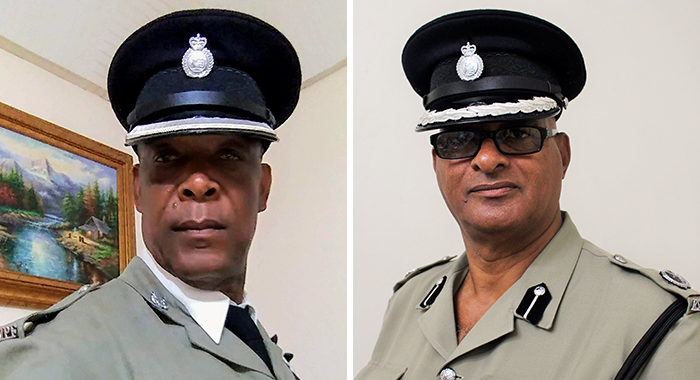 The Royal St. Vincent and the Grenadines Police Force (RSVGPF) bade farewell to two senior senior officers, w ho have retired, after serving for a combined total of over 76 years.

Assistant Commissioner of Police Richard Browne, and Superintendent of Police Timothy Hazelwood have retired from the RSVGPF after serving the force and the people of St. Vincent and the Grenadines with distinction, the police force said in a press release.

Browne’s tenure as a police officer spanned over 37 years while Hazelwood served for 39 years.

“As both men transition into a new journey in life, the Commissioner of Police, Mr. Colin John, the officers, and other ranks of the RSVGPF profoundly thank them for their service and dedication to duty; and wish them a very rewarding and happy retirement,” a press statement said.

Richard A. Browne enlisted in the RSVGPF on April 4, 1984. He received his initial training at the Regional Police Training School at Paragon Base, Barbados. On completion of his training, he was awarded the prize for Best at Drills.

After completing his first year of service, then Constable Browne was dispatched to Grenada on a peacekeeping mission after the United States (US) intervention, where he spent five weeks.

Before his enlistment, Browne was a member of the SVG Cadet Force (1978 – 1983). He attained the rank of Warrant Officer II.

This knowledgeable and “all-around” officer worked throughout the “length”and “breath” of SVG, protecting and serving the people at various departments and stations, including: Beat and Patrol; Criminal Investigations Department (CID); Traffic Department (a combined total of 15 years), and Layou, Calliaqua, Georgetown, and Mustique police stations

Browne also served as the Divisional Commander for Eastern, South Central, Central, Grenadines, and Western Divisions, and Commandant of the Police Training School.

Browne was the transportation officer during the 2007 International Cricket Council Cricket World Cup in the Caribbean region.

He was an astute drills-man and parade commander. As part of his legacy, he spearheaded the modification of the Report of Medical Practitioner and the Incident Report Forms. He also authored “A Force Funeral Protocol”, a guide on holding funeral parades and other matters associated therewith.

Timothy Steanson Eric Hazelwood enlisted in the RSVGPF on Dec. 1, 1981. He was an assertive, dedicated, loyal, and extremely effective police officer.

Due to his tenacity and drive, Hazelwood was one of the officers chosen to travel to Grenada to perform peacekeeping duties after the U.S invasion.

Hazelwood was a very proficient and resourceful law enforcement officer who never shied away from an assignment. No matter how difficult the task was, he always found a way to get it done.

His prowess in policing was equally matched in many other areas, including sports and extracurricular activities. He was a medium pacer for the RSVGPF Premier Division Team and a member of the RSVGPF Football Team.

Hazelwood represented the RSVGPF at the local and regional and international levels in athletics with distinction. He was involved in Special Olympics and was a FIFA Certified International Football Referee who performed his duties beyond the shores of SVG.

He was truly a tactical and high-performance officer with a penchant for justice for the people he served. His service to the people of SVG is honourable and one for the annals of the RSVGPF.

One reply on “Police Force lauds senior officers on their retirement”