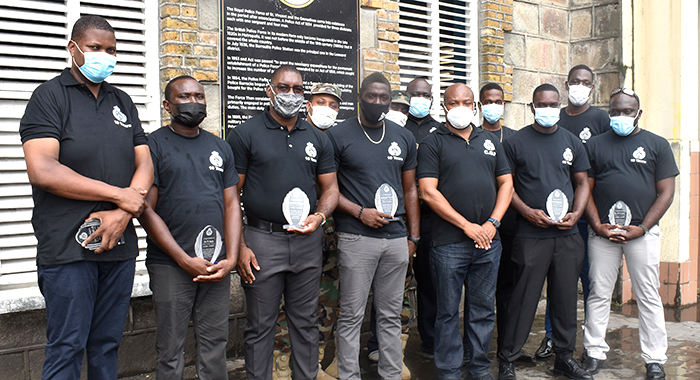 The 10 officers pose with Commissioner of Police, Colin John.

Seventeen police officers from Course #31 have achieved the significant milestone of 10 years of service in the Royal St. Vincent and the Grenadines Police Force (RSVGPF).

Last Friday, the officers commemorated their achievement by among other things, paying a courtesy call on Commissioner of Police, Colin John who presented them with commemorative plaques.

The commissioner used the opportunity to address the officers and congratulated them on their achievement and for their service and dedication to duty over the years.

“I want to commend you not only for your service over the past ten (10) years but particularly for your performances over the last 20 months. Since COVID-19 struck, you have been on the frontline – then La Soufriere Volcano erupted and you were called upon once more to serve the people of St. Vincent and the Grenadines and you answered the call well,” John said.

The police chief urged the officer to continue to work hard, be disciplined and loyal to the police force.

“Do not make us overlook you for promotion but give us reasons to promote you,” he said.