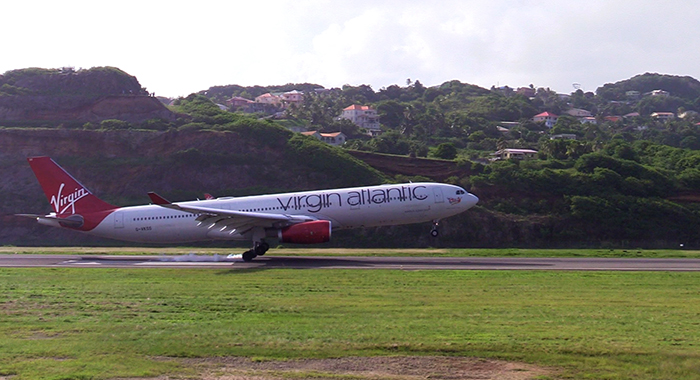 Virgin Atlantic today (Wednesday) completed its inaugural flight from London Heathrow to St. Vincent and the Grenadines, the country’s only direct service to and from Europe.

The twice-weekly service flies via Barbados and departs every Wednesday and Sunday, operating on the airline’s A330-300 aircraft boasting 237 seats.

The new services to London Heathrow airport will provide travellers from St. Vincent with a direct link to London, alongside seamless connections onto Virgin Atlantic network via London Heathrow.

It is not clear how many passengers arrived on the inaugural flight, but the cabin crew included one Vincentian.

“We are absolutely thrilled to be here today on this inaugural flight and our twice  weekly service to St. Vincent and the Grenadines has commenced at long  last and we are thrilled that this now solidifies that long-lasting relationship and we will be bringing lots of tourists to your beautiful island.”

Minister of Tourism and Culture, Carlos James told the ceremony that it was an exciting opportunity for SVG.

“We welcome Virgin Atlantic, the very first transatlantic flight to St. Vincent and the Grenadines since we completed the construction of the Argyle International Airport.”

Meanwhile, Prime Minister Ralph Gonsalves, whose Unity Labour Party administration built the airport, which opened in February 2017, said that at times like these, he reflects on faith, as mentioned in the Book of Hebrews.

He said that as he understands it, faith involves two things: the knowledge of what is not yet seen and the realisation of that which is foreseen.

The Book of James teaches that faith without works is dead, Gonsalves said.

“And in the Argyle International Airport and with Virgin Atlantic, we have conjoined faith and works, and what have we produced today? Immense joy. There is happiness across this land and I am personally overjoyed.”

He said that many years ago, when the first small aircraft landed at the airport, he kissed the ground.

He said it is in the nature of life and living that once one has achieved much, one cannot rest on one’s laurels.

Gonsalves noted the coronavirus pandemic and said Virgin was likely to be in SVG one year earlier were it not for the pandemic.

“We have to have everybody who is working at Argyle International Airport, from the cleaners, the security, all through the technical positions to the highest level of the CEO — Customs, Immigration, everybody, you have got to be vaccinated.”

He said that the COVID-19 vaccines are safe, available and “the best tool in the toolbox”.

“Let us be vaccinated because the traveller who is coming in, by and large, is vaccinated,” he said, adding that he has read that about 80% of people in the United Kingdom are vaccinated.

He added that there are high vaccination numbers in the United States and Canada, SVG’s main tourism source markets.

The prime minister said that travellers want to know that airport and hotel staff and other vendors and service providers are vaccinated.

“We can’t shoot  ourselves in the foot. We have been able to plan for certain things and we have achieved them but we have more things to do,” Gonsalves said.

He said that he knows that the relationship between Virgin and SVG is one of love but is also one of money.

“As the old calypsonian said, no money no love. So you have to get a little money and we have to make some and we have love, we have a good relationship.”

Gonsalves said he was happy that Beache and his team were able to accomplish the flight.