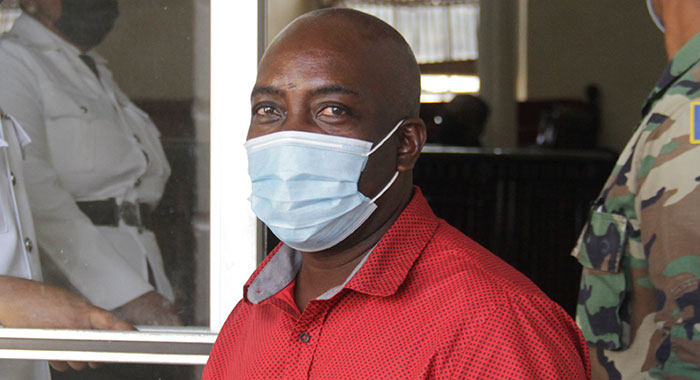 The sentencing of a man who has pleaded guilty to causing the death of a 4-year-old child by dangerous driving was on Monday adjourned to Friday to allow the prosecution and defence to agree on the facts in the matter.

Anthony Charles was driving a minibus that ran over the child, McKayla Abbott, after her mother, Carol Abbott, had embarked the vehicle in Georgetown on April 20, 2015.

Maria Jackson-Richards appeared for the Crown while Duane Daniel represented the defendant.

The question that High Court Judge Justice Brian Cottle wanted to resolve was whether the conductor was inside the vehicle when Charles ran over the child, resulting in her death.

The matter arose after the court heard Daniel’s plea of mitigation on behalf of his client.

Daniel told the court that on the date of the incident, Charles’ minibus was operating on the Kingstown—Georgetown route.

In Georgetown, he stopped to allow Carol and McKayla to embark. There were a number of passengers in the van at the time.

The mother entered the vehicle and was seated and it was Charles’ firm impression that the child was seated also, the lawyer told the court.

Daniel said that the conductor was seated in the minibus and his hand on the door. However, the child was still outside and the van ran over the child, resulting in his death.

Daniel said that after the incident, Charles visited the hospital and showed remorse.

He noted that his client has no previous conviction and that the Commissioner of Police suspended his license on Feb. 15, 2019.

The lawyer argued that looking at the rulings of courts in similar cases as well as the victim impact statement, a suspended sentence and the suspension of Charles’ driving permit would be an appropriate sentence.

“I hasten to remind the court, in respect of that latter aspect of the sentence, that the Commissioner of Police has already sought to have him surrender his driver’s permit and he has not had one for more than two and a half years,” Daniel said.

The lawyer said that prior to the incident, his client was a model citizen who was industrious and attempted, to the best of his ability, to provide for his children and aged mother.

“The question is whether incarceration is appropriate in this instance,” Daniel said.

Jackson-Richards then told the court that the mother of the deceased child had wanted to speak to the court but was unable to do so because of technical difficulties.

The prosecutor, therefore, asked that the court proceed with the sentencing.

It was then that Justice Cottle said that there was an element of the facts with which the lawyer needed to help the court.

The judge then asked where the conductor was when the minibus struck the child.

Daniel said that his instructions are that the conductor was seated in the van.

However, Justice Cottle said that the deposition and victim impact report suggested that the conductor was outside the van trying to assist the young child to board.

Daniel said those are not his instructions.

The judge then asked the prosecutor if she accepted the facts as presented by the defense, and Jackson-Richards said that the Crown maintains that the conductor was outside the vehicle at the time.

“The van came to a stop and Ms. Abbott boarded said van. As the deceased was going into the van, the driver drove off said van causing the van door to slide forward,” the prosecutor read from the deposition.

The judge said that it would make a big difference if the driver drove off leaving his conductor outside, adding that this was crucial for sentencing.

The prosecutor said that the impression that she got was that the conductor was assisting the child at the time of the incident.

“Whether he was sitting or whether — because I know there are times when conductors would sit and assist and times when they are outside … but in the circumstances it is highly unlikely that if conductor was outside when the van drove off that the van would have driven off without him,” she said.
The judge said that his is the point he was making, adding that it would demonstrate a greater level of dangerous driving if the driver drove away before his conductor got into the vehicle.

However, the judge contended that the lawyer should read the entire deposition and pointed to the last two lines.

“When my daughter was about to step up, the conductor came outside to help her when he drove off,” Daniel read.

The lawyer said that it sounds like Abbott entered the van and left her daughter outside and the driver started to drive off.

“It might be at that point that the conductor attempted to come out,” Daniel suggested.

He added that later in the deposition, the conductor said:

“The van stopped and I opened the door and she got in and leaving the child outside. As I was about to pick up the child, the van drove off and I told the driver stop.”

Justice Cottle asked if this was consistent with what Abbott had said and the lawyer said no.

The judge said that the conductor said he was picking up the child but did not say whether he was inside or outside the van.

Justice Cottle added that to his mind, this is an indication that the child was outside.

He indicated that this was why he was interested, as the prosecutor had indicated, to hear from the child’s mother ahead of the sentencing.

Justice Cottle said that without a firm basis of facts, the sentencing exercise should not be completed.

“It is crucial to my determination to ascertain whether the facts are that he drove off before his conductor had re-entered the vehicle or while the conductor was in the vehicle,” Justice Cottle said, adding that this has to be sorted before the sentencing could take place.

He indicated that he had prepared two sets of draft sentencing remarks.

The sentencing was adjourned to Friday.