Vaccinate or quit ‘is cruel; it is wicked’ — Robinson 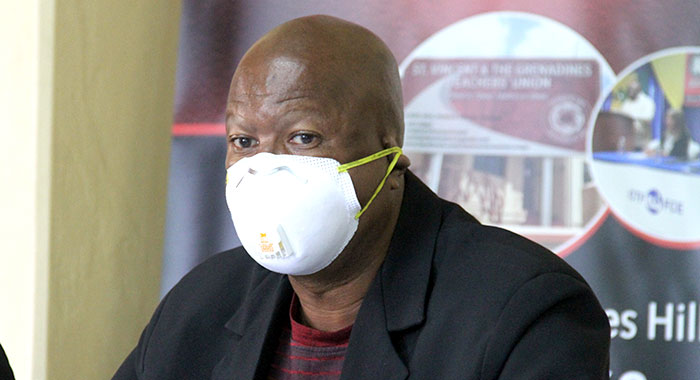 The COVID-19 vaccine mandate that comes into effect on Nov. 19, which would require that many public sector workers vaccinate or lose their jobs, unless they get a medical or religious exemption is “cruel” and “wicked”.

That is the view of president of the St. Vincent and the Grenadines Teachers’ Union, Oswald Robinson, who told a press conference that the mandate raises issues about freedom of conscience.

“You don’t have to belong to a religion. It could be just about your philosophy, your spirituality, you hold an idea and the Constitution speaks about that — to be able to propagate it, to express it, to share it and by doing so you are not infringing on anybody’s rights.

“And all that seems now to be going down the drain. That is why they are trying to muzzle people now from speaking. You can’t hold an idea that is in opposition to the government. So where is democracy? And we are doing all this in the name of COVID,” Robinson said.

He said that while the law mandating vaccination comes into effect on Nov. 19, some principals are already demanding COVID-19 vaccination certificates.

“And it’s a situation where somebody is trying to use the principal as slave drivers — massa on the plantation. It’s a colonial system we are reinventing. We don’t want anyone to speak out. We find some way to attack them, to dehumanise them, to defame them, to mute them.”

He said that a teacher at a school in Kingstown complained to the union, on Tuesday, that the principal of the school wanted to dictate what types of COVID-19 test the teacher should take.

Shirlan “Zita” Barnwell, of Jomo Thomas Chambers, which represents the union, told the press conference that the law speaks to a PCR test, which is defined as any test that detects the presence of the COVID-19 virus in the body.

Robinson said some people behave as if they have title deeds for various schools.

“And you can’t have people in position making you look bad because it is serious business. That’s why we are putting up a serious legal challenge when the time comes,” the union boss said.

He said that the union has received a renewed mandate from its members on the issues.

“Could you imagine somebody working for 35 years and you arbitrarily, unilaterally tell them they must be vaccinated or they have to go?” said Robinson, a retired educator.

“This is cruel; it is wicked. You don’t have any choice over your body, what you should put in it. The state now is dictating that.”

He noted that he had said at a press conference early when the idea of mandatory vaccination was floated that a time would come when the state would decide which doctor people should go to.

Robinson was speaking to the provision in the law that says that in situations where a personal physician advised against COVID-19 vaccination, doctors specially selected by the state would make the final determination on whether the person should be exempted on medical grounds.

“People are losing their jobs. We had about 30-something per cent of youth unemployed. So if everybody who does not take a vaccine you fire them, is that good for the country?

“Think about it. You are creating a crisis to have a higher rate of unemployment so you could control the people because you want poverty to go up. And that is so ironic. And when you speak, everybody tries to demonise you but this is serious business.”

The new law says that vaccinated persons would be tested as the chief medical officer sees fit.

However, people who secure exemption from vaccination would be required to test on a regular basis.

Robinson, however, noted that vaccinated and unvaccinated could catch and spread COVID-19.

“We have said to the government, if you want testing, let everybody be tested; all workers, all teachers coming into the workplace. Because we know there are people who were vaccinated, they caught COVID and some of them spread it.

“So if everybody can catch it and spread it, the safest thing to do is to produce a test so you know that who is coming to the workplace is relatively safe.”

Robinson said that the union represents all its members, regardless of a member’s personal stance on vaccination.

“We say for those who are vaccinated or intend to, accept the liability for any adverse reactions or death. The state not willing to do that and when we wrote to them, they not answering us. They read part of the letter on TV. That is respect again

“So you are creating a crisis where you’re muzzling people, you’re suppressing relevant information that people should have so that they can make informed decisions.”

He said that the union has done three information sessions with its members, including the medical elements of vaccination, and the legal aspects.

“And we have even selected one of the doctors who we already know will be on the team of experts to come and speak to our members and spoke at length and provide all the information about COVID and vaccination. But it boils down to the individual. You have to make your own decision about your body. So it’s not only about hesitancy but there is a lack of trust.

“The government told us that vaccination is not mandatory and in a subtle way they removed the word ‘voluntary’. So what is the inference? Once you take out that keyword, the understanding is you’re forcing me. If you approach somebody to do something is against their conscience, that’s rape. No so?”

Robinson said that the Bible speaks about this. “That which is not of faith is sin. Sinful. You don’t respect people’s opinions again and so you’re creating a crisis.”

4 replies on “Vaccinate or quit ‘is cruel; it is wicked’ — Robinson”