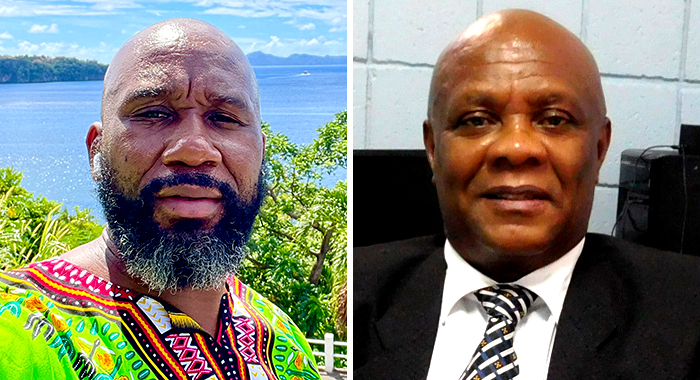 District 2 Magistrate, Bertie Pompey, on Thursday, ordered the media not to report on the evidence from the trial of government senator Ashelle Morgan and Assistant Director of Public Prosecution, Karim Nelson, when the trial was ongoing.

The magistrate made the order in Calliaqua, on Thursday, during an exchange with journalist Kenton X. Chance, who is also executive editor of iWitness News.

The Mesopotamia Magistrate’s Court is sitting in Calliaqua for the trial.

When Chance arrived at the court ahead of the 11 a.m. scheduled start of the second day of the trial, he was approached by the prosecutor S. Stephen Brette, who is deputy director of public prosecution in St. Lucia.

The article was published at 1:41 p.m. — during the lunch break of the first day of the trial and reported extensively on the evidence of Police Constable 933, Elroy Quammie, a crime scene investigator.

The article was updated subsequently to correct minor typographical errors and the number of weeks that elapsed between the shooting and when the crime scene investigator visited the scene.

Brette told Chance that the article was a “verbatim” representation of what had transpired in court.

The prosecutor noted that other witnesses were yet to testify and said that they could tailor their testimony in response to what they had read of the proceeding.

Brette told the journalist that he would “prefer” if the testimony of Cornelius John, whose cross examination was about to resume, was not treated similarly.

At the time of the conversation, Chance had also published a detailed article about John’s testimony thus far.

“You would ‘prefer’, or—?” Chance responded and the prosecutor said he could do it the other way and have the court say it.

“I would prefer that,” Chance told the prosecutor.

The journalist noted that the trial was not a preliminary inquiry — a hearing in which the media is constrained on what it can report — and that the court had not given any directive regarding limiting reportage on the matter.

The lawyers subsequently went into the magistrate’s chambers together. iWitness News does not know what the prosecutor and the lawyers discussed together in the courtroom or inside the magistrate chambers, or if the magistrate was in the chamber at the time.

“Before I proceed today, there is some information that came to me. It is about press reporting. Could Mr. Chance come forward please?”

Chance went forward and was directed to stand in witnesses area. The magistrate inquired about whether he was editor of an online medium called iWitness News.

The journalist answered in the affirmative and the magistrate said that he had been told of a news article on the platform.

Chance inquired as to which article it was and the magistrate said he was coming to that.

The magistrate, on receiving clarification from the Bar table about the article, spoke of the reporting on the case, saying that he had not seen it himself, and that he does not want the evidence of the trial to be reported while the trial is ongoing.

Chance asked the court whether he could say something. He told the magistrate that since he began covering the court some years ago, and even before then, it has been the practice for the media, unless otherwise directed by the court, to report extensively on ongoing trials.

The journalist said that the media would report on the evidence and the dates to which proceedings were adjourned.

He said that has been the case including at Pompey’s court.

The magistrate said he was not aware of it ever taking place in his court and if it happened, it was not brought to his attention.

At this point Counsel Kay Bacchus, who holds a watching brief in the matter, rose and said that  while she understood the reasoning, she did not want it to be a precedent of the court barring the media from reporting on trials when they are in progress.

Marks, on the other hand, said that such detailed reportage has serious implications for which there could be a mistrial.

Meanwhile, the prosecutor told the court that the article reported “verbatim” what was said in court, adding that the journalist’s notes were better than his. Brette further commended Chance on his note-taking.

“I think they were just as good as Counsel Daniel’s notes,” Chance said.

During the proceeding, Daniel, like Chance, used a laptop computer to take notes and in one instance, when the lawyer read from the notes, the court agreed that it was identical to the court’s record.

Chance further told the court that while he appreciated the prosecutor’s commendation about his note-taking, the iWitness News article was detailed but was “not verbatim”.

He told the court that his reportage was not intended to disrespect the court but that he was merely following what had been the practice by the local media.

The journalist further told the court that in light of its ruling, iWitness News will not report further on the trial until it is complete.

The magistrate and the prosecutor, however, said that the media can report on the trial but “not the evidence”.

Chance told the court that he would suspend reporting on the trial until it is complete.

Later, during a break in the proceedings, Chance and another journalist covering the matter approached the prosecutor and asked him about the laws that support the application that he made to the court.

The prosecutor promised to supply them but had not done so by the time the proceedings adjourned for the day at 5:39 p.m.

Meanwhile, at 11:31 a.m., John was recalled to the dock and Marks continued his cross examination of the virtual complainant.

The court then heard the testimony of Rochelle Franklyn, an auxiliary police officer and one of John’s neighbours, who took the stand from 3:31 p.m. until 5:39 p.m.

The suspension came immediately at the end of Franklyn’s cross examination. The trial is scheduled to resume today (Friday) at 9 a.m. in Calliaqua.