The evidence was not properly presented’ — Kay 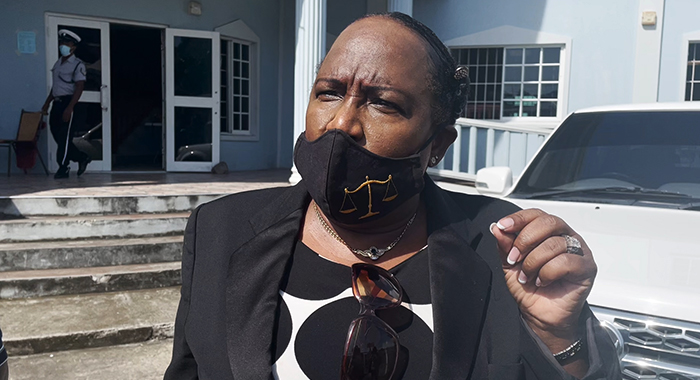 Lawyer Kay Bacchus-Baptiste says Thursday’s acquittals in the Morgan/Nelson trial was not because of an absence of evidence but because of how the prosecution presented the evidence.

“I have many comments. First of all, you’d recall  that I predicted that because of the way the prosecution handled this case from the beginning they were going to acquit the defendants,” Bacchus-Baptiste told reporters in Calliaqua on Thursday, after the acquittal.

“I predicted that and my predictions were not even anywhere near because I did not factor in a magistrate who would, to my mind, wrongfully exercise his rights.

On Thursday, the Mesopotamia Magistrate’s Court, sitting at Calliaqua, upheld no case submissions made one day earlier and freed lawyer and government senator Ashelle Morgan of an assault charge, and Karim Nelson, an assistant director of public prosecution of charges that he unlawfully and maliciously wounded Cornelius John and unlawfully discharged a firearm at him.

The charges stem from an incident in Diamond Estate on April 13, where John was shot at his home.

S. Stephen Brette, who is deputy director of public prosecution in St. Lucia, prosecuted the matter, and Bacchus-Baptiste, who is John’s lawyer, held a watching brief in the trial.

Bacchus-Baptiste said that she has the statements of Morgan, Nelson, and Adams, indicating that they went to John’s house at the time of the shooting.

“I am not hiding behind any legal nonsense now … This is a time for truth and justice. They went there, the man was shot and now we have a total acquittal because of the bungling of the way this man was prosecuted; not because of the evidence. The evidence was not properly presented.”

In upholding the no case submission in Nelson’s case, Magistrate Bertie Pompey  noted that 11 witnesses testified on behalf of the Crown and at no time was any of them able to link Nelson to the offence of wounding John.

“There was not one iota of evidence linking the first defendant to wounding Mr. Cornelius John and discharging a firearm at him,” Pompey said.

He said he was “absolutely in doubt as to who this tall man was”.

But Bacchus-Baptiste said that her instructions are that Rochelle Franklyn, an auxiliary police officer who is John’s neighbour, could have identified Nelson.

“She is the neighbour who went there (to John’s home) first [after the shooting] and whom he (the tall man) asked if her common law husband was at home. She was never asked to identify the tall man. I don’t understand why,” Bacchus-Baptiste said.

The lawyer said that to her mind, the magistrate made some wrong rulings when he decided that the prosecutor could not ask what type of firearm licence was issued to Karim.

“I have never heard anything like that … That was not a question that is inadmissible. But the most egregious thing of all, in all my 25 years-plus of practising criminal law, I have never had a court refuse to summon a prosecution witness who was told to come to court and refused to come and gave a stupid, spurious reason that the trial last six days.”

One day before the trial ended, the prosecutor made an application to summon Adams to testify, saying he had refused to come to court and that the police who had gone to his home that morning had not found him.

However, amidst strong objection from the defence, the magistrate refused to issue the summons.

“I have done  trials for four weeks — criminal trials — five weeks. Since when six days is a  timeline that is too long. That is the most spurious thing he did and I am saying it was a perverse decision that he made. They set it up so that if he did not have the evidence of Vernon Adams, he could say, truthfully, nobody properly identified Karim Nelson as being there. It is atrocious.”

Meanwhile, John is awaiting word on the date of his trial on a charge that he used threatening language to Morgan at Diamond Estate on April 13.

5 replies on “The evidence was not properly presented’ — Kay”