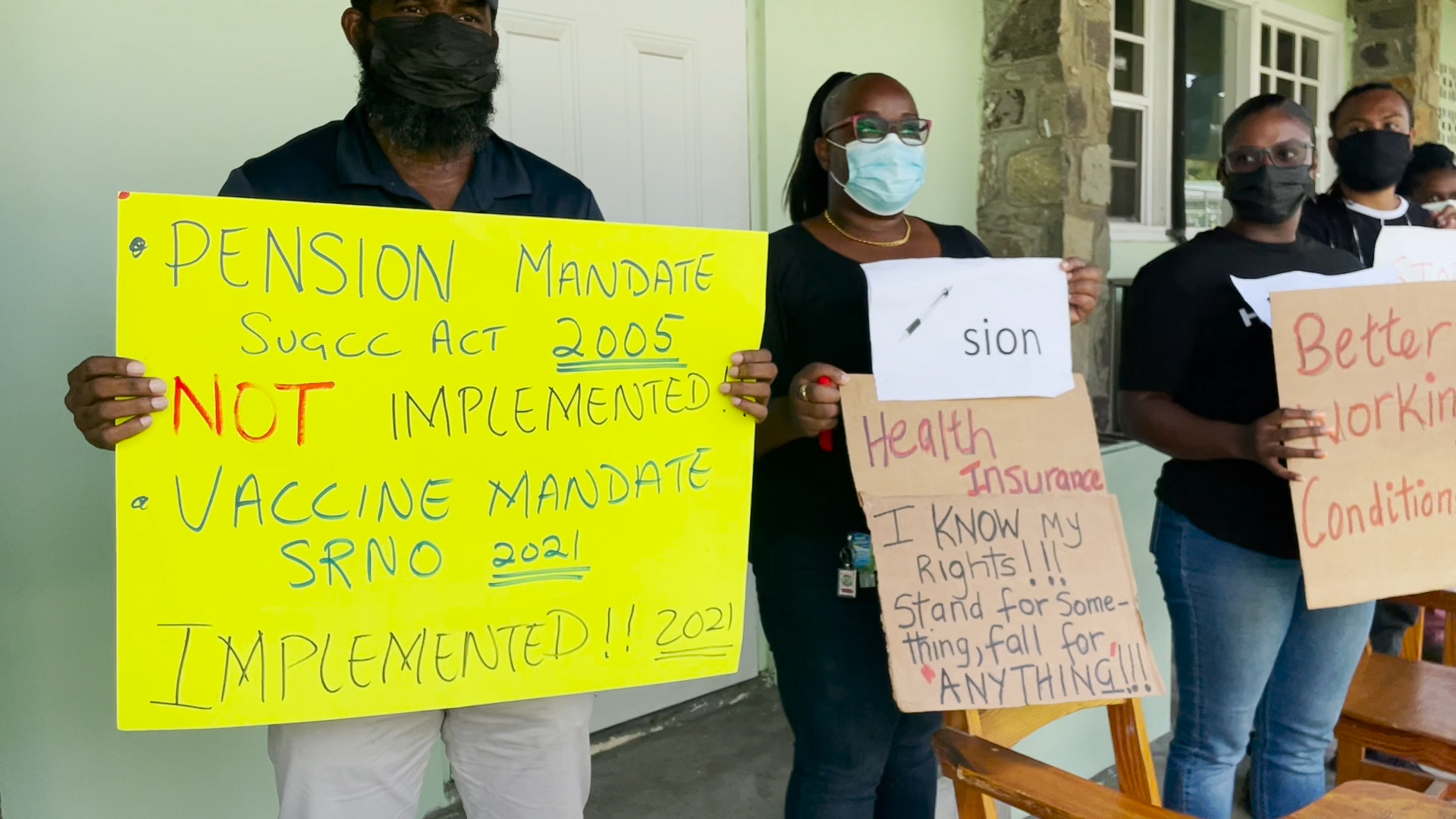 Some lecturers at the Technical College held a demonstration on Friday, Nov. 19, 2021, as the vaccine mandate came into force. (iWN photo)

A number of lecturers at the Community College are leveraging the government’s COVID-19 vaccine mandate to demand urgent action on a number of outstanding issues at the Division of Technical and Vocational Education.

“… there are some matters that have been ongoing for the past few years that we need to get dealt with immediately,” Stacy Balcombe told iWitness News at the Arnos Vale campus, on Friday, where lecturers held a demonstration.

“Since we have been pushed to meet a deadline to be vaccinated, we are pushing back now in terms of the things that  the college planned and what is in legal writing that they were supposed to implement for the college,” she said.

Balcombe, who has been employed at the college for 10 years, said the demonstration was also held to emphasise their support for personal choice on the issue of vaccination.

She told iWitness News that one of the main issues that they were demonstrating to highlight is the absence of a pension plan for some lecturers, 14 years after it should have been in place.

“And currently, what is happening at the college is that some persons are pensionable and some are not pensionable. So those who were hired under the board, we have not yet been transitioned onto a pension plan. Over the years, we have had countless meetings, countless back and forth with emails, filling out forms and still we have not received any sort of guarantee with our pension plan as lecturers.”

Balcombe said she is fully vaccinated and believes it is people’s choice whether they want to take the COVID-19 jab.

The demonstration took place on the day by which the government said that a large cross-section of public sector workers must be vaccinated in order to remain on the job.

“I am for no mandatory vaccination. I think it is everyone’s right to choose what they take into their body. I do not believe that anybody should be forced to take a vaccine,” Codisha Matthews-Peters, another of the lecturers on the picket line, told iWitness News.

“I really would have liked it if our prime minister would have taken the approach where he would have basically worked along with the people and try and educate them more, rather than force them to make a decision on vaccination,” she said.

The lecturer said that she is unvaccinated but intends to report to work today (Monday).

“I am going to come  to work and whatever they choose to do at that point, then — but I will be here to teach my students,” said Matthews-Peters, who had no plans, “at the moment”, to get vaccinated.

“So far, no one has given me sufficient information to convince me that it is absolutely necessary. I am not saying that people are not dying and people are not suffering or whatever the case might be. But, at the same  time, I believe that if you have a strong immune system and you are able to fight the virus on the basis of that, you should  be able to work with that.  And once you, of course, take measures to protect others around you, such as wearing your mask and that kind of stuff.”

She said that she has “some religious  beliefs” but her decision to not take the jab is not based on that.

“It is grounded on the information that I have received, based here in our community and globally,” Matthews-Peters told iWitness News.

Another of the lecturers on the picket line was Danielle Jackson, who teaches information communication technology (ICT) courses.

“One of my grievances that I have is the lack of working computers. Out of four labs, we have two that are actually in commission … And in one of those labs, only about 60% of the commutes are working.”

Jackson said that if she gives her students a lab assignment, they would have limited access to functioning computers.

“So you may have 15 students in a classroom, 10 computers working.  Obviously, the five remaining students will have to wait for them to use the other computers that are working…

“We can do so much more in the field, so much in the courses. That’s one major grievance, especially in the area of ICT.”

Asked what she would say if people say that lecturers are using the COVID-19 vaccine mandate to raise all these issues, Jackson said:

“I think what happened is that because the mandate was accelerated, we are now wondering why is it that all the other grievances, all the other problems or issues that we have, why aren’t they being attended to…

“I think that is why we are here. The mandate was accelerated, the pension plan isn’t. We are  looking for resources. Sometimes, we have to do our own thing; we have the students bring their own laptops.”

Shefflorn Ballantyne, a business studies lecturer, told iWitness News that it is important to establish the context of the demonstration.

He said that their union, the Public Service Union, wrote to the director of the college inviting him to have a meeting with his staff.

That this was done on Tuesday and the college was given, and did respond by Wednesday.

“But they did not respond with any sort of indication of the intention of meeting with the staff.  All they did was to respond to some points that we raised as issue of  grievances,” Ballantyne told iWitness News.

He said they were requesting the meeting to handle several issues, including pension and working conditions.

“The main point is this. We were refused the opportunity to meet with our director with these issues. He absolutely did not show any intention of meeting and we consider that to be very disrespectful. But, in addition to that, in the correspondence that went to the Community College, it was indicated to them that failure to respond for a meeting would result in industrial action and that is what we are fulfilling today.”

Ballantyne said that he does not believe in mandating any vaccine whatsoever.

“It is to be left to a person’s personal choice,  based upon their freedom of conscience, which is protected in the Constitution of St. Vincent and the Grenadines. So, I am totally opposed to mandatory vaccination.”

He said he has no intentions of getting a COVID-19 vaccine.

“On Monday, I will be reporting to work. What happens depends on the dean, the director and those persons in charge. I cannot predict their action but I intend to report for work,” Ballantyne said.

And, Dean of the DTVE, Osbourne Bowens, responding to the lecturer’s concerns, told iWitness News that he was aware that “the college is, by law, mandated to institute a pension plan”. He said he believes that mandate was given in 2007.

“That pension plan, I am aware, is delayed and it has been delayed for a while. As of January 2021, again, there was some acceleration of the process to get the pension plan going and I understand that there were some other delays from January 2021. I am not  sure what is the current status and what is delaying its implementation.”

Regarding the computer labs not functioning at capacity, Bowens told iWitness News:

“We have on the divisions compound four computer labs and you would appreciate that four computer labs with a total of just over 700 students, these labs are under constant  strain. They are in use, as a matter of fact, every single day.”

Bowens said that wear and tear and hardware failure are issues at the computer lab.

“Two of those computer labs are past 10 years old and you would appreciate that after 10 years, computer  hardware will start to give issues. So we are in the process of replacing those computers in those two labs. I understand there is already a tender out to have those computers replaced and I think that is where the process is at the moment.”

Asked whether he thought that it was a fair or reasonable approach for the lecturers to leverage the COVID-19 mandate, Bowen told iWitness News: