Police welfare leader among officers ordered off the job (+Video) 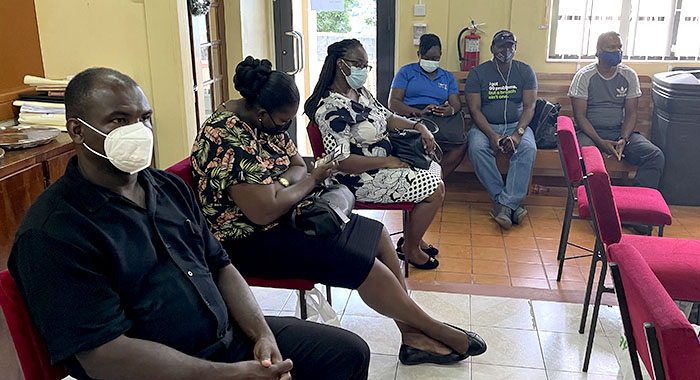 Six of the unvaccinated police officer who were ordered off their jobs attended a press conference in Kingstown on Monday, NOv. 22, 2021. (iWN photo)

Chair of the Police Welfare Association, Station Sergeant of Police Brenton Smith was among public sector workers ordered off the job on Monday, the first weekday after the COVID-19 vaccine mandate came into effect on Friday.

“Today is a very sad and dark moment in the lives of many of our police officers, also nurses, teachers, and public servants, based on the government’s latest SR&O that came into effect on Nov. 19,” Smith told a Teachers’ Union press conference in Kingstown, on Monday.

“Today, I proceeded to my  work station at Georgetown, so too many of my other colleagues who [went] to the various respective stations and departments and we were told that we are not allowed to be on the compound. We were asked to  leave,” Smith said.

He was speaking at a press conference attended by six other police officers whose status prevented them from reporting for duty.

“This, however, is gonna affect many of our members who have decided to stand firm and not give up on constitutional rights of freedom of expression, consent, freedom of conscience…”

Smith said that the officers are not not against vaccination “but they wanted more time to see exactly how things were working in regards to this COVID-19 vaccine”.

He said that some police officers, “based on their own medical issues, did not think it wise for  them to take the vaccine. Some of them were advised by their doctors not to yet”.

People can obtain an exemption on religious or medical grounds but Smith said that the process “is like putting a camel through a needle … It is not an easy task.

“We believe that this mandate is a wicked one, one that has no love for many of our officers and other persons who are affected in this regard and we have to call it as it is.

“It is the most wicked piece of law you can find in the state of St. Vincent and the Grenadines…”

He said that when one listens to the authorities, the vaccine mandate “is not about making it safe for you, it is always an economic issue.

“And when they talk about the economic issue and how it would destroy the economy of St. Vincent and the Grenadines, you ask yourself what about the persons who are now sent home on the breadline. Isn’t that an economic issue as well where many of our families are going to be tremendously affected as a result of this?”

Smith said that many unvaccinated workers left their post not knowing where their next dollar would be coming from.

“They have their bills, their mortgages, their loans, have to take care of their families, many of whom are going to school. “

He said that on the one hand, the government is saying that people have to take the vaccine so that things can go back to normal.

“But then on the other hand, you are destroying the lives of so many families. Could that be correct? Could that be right? I am simply saying here that the Police Welfare Association has always said this, ‘We are not against vaccination but we are totally against mandatory vaccination.’”

Smith said around the world and in the region, including in Antigua, governments are backing away from vaccine mandates.

Smith said that in SVG, the majority of people do not want to be vaccinated with the COVID-19 jab.

He noted that each of the two main political parties in the country got over 30,000 votes in the general elections last year November.

“They  cannot get the masses of St. Vincent and the Grenadines to be vaccinated. It tells you one thing then: that the power lies within the people and you must understand that fully and people have to understand their powers.  If that is the case, who are you representing as a government if the majority of people are saying that they do not want to be vaccinated?

“I don’t understand. We are at a very serious crossroad in our lives and we have to stand up against tyranny. This is not time for loving a  political party. This is time to defend your own livelihood like never before. This is not about politics. This is about your livelihood and you have to call it for what it is.”

Smith said that many police officers took the COVID-19 vaccine against their will and some senior officers even advised their juniors on which jab to take.

“I never knew that we have medical experts in the police force now. Well, I am happy if that is the case because they might do well for some persons but we have some overnight doctors who are telling us which one of the vaccines is best for us.”

“And the mere fact that they can identify which one is best tells you something about the others or maybe all. We are simply saying here that it was said that over 85% of the police force are  vaccinated. If that is the case, ask how many took it of their own free will.”

Smith said he is not concerned about the number of officers who are vaccinated, to the extent that they choose to do so.

“But if you are forced to be vaccinated, that is of concern to me and the Welfare Association.

“But I am particularly concerned about the persons who were sent home today and are now on the breadline,” he said.

“But I will say this, we as police officers are some very talented persons among us. We will come together and we’ll form a group in which we can create businesses for us.

Smith said that while the police force is a good place to build a career, he wanted to caution young people in light of an alleged statement by the authorities that they will recruit 200 more police officers.

“But do not be fooled because if the authorities are now saying that they have over 1,000 [police officers] vaccinated and they are recruiting 200. It means that there is no need for the 200 now.

“And since when vaccination is a criteria to join the  police force? … But don’t be fooled because the vaccine cannot be the  only criteria for entry into the organisation and it doesn’t say that all who are registered now that you will be taken in.”