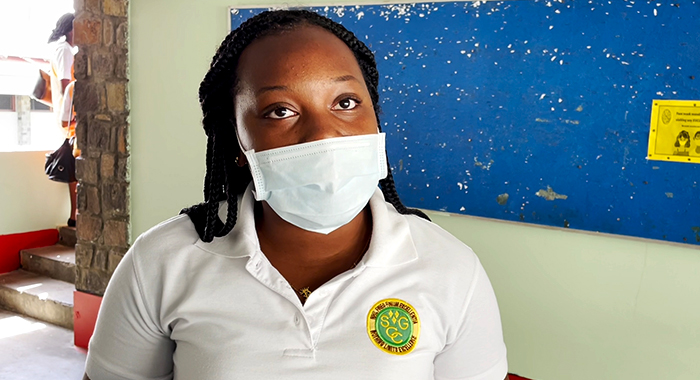 Reyell Morgan says that she would quit her studies at the Community College if COVID-19 vaccines become mandatory for students. (iWN photo)

A second year student of the Community College says she would rather quit her studies than take a jab ifCOVID-19 vaccines become mandatory for students of the institution.

“If it comes to that and we have to take it to come to school, I wouldn’t come to school. Because I won’t take it,” Reyell Morgan, a business studies student told iWitness News on Friday.

Morgan was among students who joined lecturers at the Division of Technical and Vocational Education in a demonstration to highlight a number of issues at the college last Friday.

The issues included a lack of furniture, lack of functioning computers, and the absence of a pension plan —14 years after one was mandated.

A number of lecturers at the college are leveraging the government’s COVID-19 vaccine mandate, which came into effect last Friday, to demand urgent action on a number of outstanding issues at the DTVE at Arnos Vale.

Morgan told iWitness News that the students had a hard first year at the post-secondary institution “because of the lack of items that we need to further our studies.

“We came here for the opportunity to learn a lot of stuff. So when there is a lack of resources that we need, how can we further our studies? We have paid a lot of money to come here and I don’t know where the money went because we are not seeing it.

“And our lecturers, you can’t force our lecturers to take vaccines. That is against their will. So, I think the government should reconsider this because if they want to take it, that’s their choice.”

iWitness News noted to Morgan that Prime Minister Ralph Gonsalves has said that St. Vincent and the Grenadines will need, among other things, to vaccinate 90% of its population 12 years and older to get the economy “back to a level of normalcy”.

“Nobody is going to force me to take something that is against my will because if you take the vaccine, they say, it can’t protect you from getting the virus. So, why take the vaccine?” Morgan told iWitness News.

iWitness News also noted that it is also said that the vaccine can prevent one from getting a more severe form of COVID-19 or dying from the virus.

Also on the picket line with their lecturers was Albertini Grant, a second year business studies student.

“My first year has been a horrible experience due to the lack of furniture. Certain furniture aren’t in proper condition, some of them are rusting, which defaces our school uniform. Some are  shaking. Sometimes, too, we fall and hurt ourselves from them.”

Grant said that students paid a technology fee as part of their school fee but there is a lack of computers.

“Some of the software on the computers are out-of-date, especially for the accounting groups. Sometimes, we have to skip certain topics because the computer and the programmes cannot help us in those areas.”

He said that with the vaccine mandate, some students are worried about their education.

“… our teachers go out of their way, they go the extra mile to make sure that they  utilise the limited resources to provide us with the education that we need.

“From the way how it is looking, it looks as if being vaccinated,” Grant was saying, when Morgan added, “is more important than the qualification.

“Because, first thing first, they are gonna ask you if you are fully vaccinated and then I don’t know about the requirement because —”

Grant continued: “Vaccination seems to be the requirement. It says that you are specialised or you are ready to become a teacher, in the way that they are going about it.”