‘No difference’ between vaccine mandate and ‘a rapist’ — group 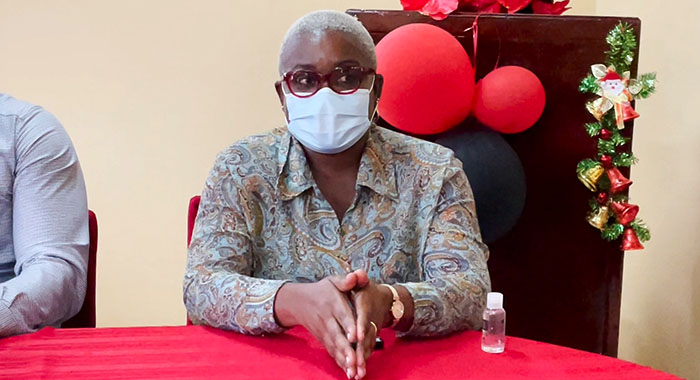 A local activism group says that the COVID-19 vaccine mandate in St. Vincent and the Grenadines is “violating the bodies of men, women, and very soon, children” and is, therefore, akin to “a rapist”.

Nikeisha Williams, spokesperson for RISE Hairouna told a Teachers’ Union press conference, in Kingstown, on Monday, that  a number of persons reported to her that day that they went to work and were turned back but they will continue to do so.

“So that is the only thing  that continues to give me some hope,” Williams told the press conference, three days after a policy mandating COVID-19 vaccine for a large cross section of government workers came into effect.

“Putting people on the breadline because of a vaccine is wrong across the board,” Willaims said, noting that the country is already battling high unemployment.

“When you put people on the breadline, what are you saying to them? A number of these people have worked 15 years and over, some even more than that. Some of them are at retirement door, just a few more months to go and they will be off.

“Forcing someone — and I have been saying this from the very beginning — forcing me to do something that I don’t want to do, there’s no difference between that and a rapist.

“You are violating my body. You are violating the bodies of men, women, and very soon, children. There is something to be said about any government, whether ours or anyone across the world, that does things like that.”

She said that SVG is pushing ahead with its vaccine mandate even as a number of countries are pulling back from mandatory vaccination “because statistics are now showing that even though you have come to your 70% vaccination of your population, you cannot achieve herd immunity. It’s impossible.”

Williams said that in Gibraltar, where there is an almost 100% COVID-19 vaccination rate  high, they have decided to cancel Christmas celebrations.

Gibraltar, a small British territory, tightened COVID restrictions over the festive period following a spike in case and has cancelled official Christmas celebrations despite its high vaccination rate and relatively low number of infections.

Residents have been urged to limit mixing as much as possible in new guidelines announced last Friday following a rise in cases, according to yahoo!movies.

“A celebration that the Christians world looks forward to, they have decided to cancel that because they cannot run the risk and, again, this is a country with 100% population vaccination,” Williams emphasised.

“What are we doing?” she said, referring to the authorities in SVG.

“Are we so sinister that we would know all of this and still force someone to take their vaccine against their will? Are we so in need to prove a point. Many of these people have been complaining that they have gone for exemption and they are simply turned away without even being heard.

“What are we doing? What are we doing to our people? A vaccine that we have no idea how it affects us in a year, two years,  three, five, 20, we are pushing our young people to take. Not just pushing, we are forcing it upon them.”

Williams said that she and Rise Hairouna are not against vaccination.

She said that the Community College is now asking second year students to be vaccinated and the St. Joseph’s Convent in Kingstown have sent home letters to parents saying that they are  highly recommending that their students be vaccinated.

“How long before a letter comes home from your child’s school. Are you willing to risk your children. Shouldn’t the children have a  fair chance to decide if they want to do this experimental drug? Are you going to make that decision for your child?

“Are we going to continue to watch our brothers fall along the wayside? Is that what we are going to do? Are we going to sit and watch people that we were raised with become unemployed simply because they made a choice not to take this jab? Is that what we are doing? Where is that love and that community spirit that we once had as a people. Where is that responsibility for each other, being your brother’s keeper and all …” Williams said.

“You  don’t force people to do something that they don’t want to do, especially where you refuse to take any liability for it. If something happens by forcing people to do this, if you are so confident that this is the way to go, then take responsibility if something happens.  You pull yourself out, you leave them to fight on their own and you say it is for what? What is the goal? What is your motive?”

She said that RISE Hairouna will continue to stand with the people of  St. Vincent and the Grenadines.

“We will continue to champion the cause of those persons who feel as though they have no voice and they have no one, that no one cares. The stresses of 2021 have been ridiculous for the persons that live on the islands of St. Vincent and the Grenadines. One turmoil after the next. It seems as if  you can’t get out of one quick enough before something else happens.

“For many persons, this Christmas will be the darkest one ever and you compound this by putting them out of a job and you feel as though there won’t be some sort of  fall back, there won’t be any resistance, that everything is going to be hunky-dory?

“Let us not put the Vincentian public under any more pressure that they already face. Let us not take people’s livelihoods away from them. Let us find another way because there are other ways. Let us follow the science. Follow the science. Do your research. We have and we suggest you do the same,” Williams said.