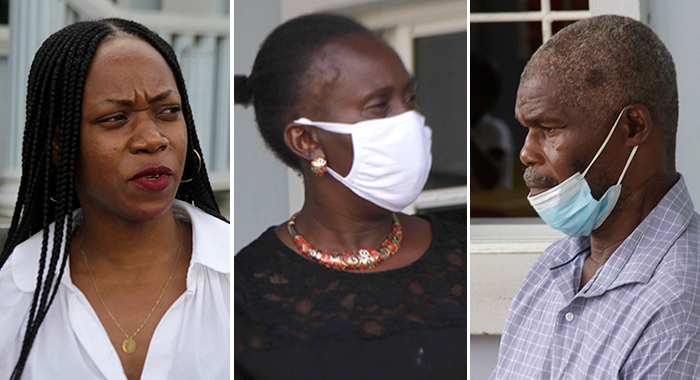 A composite image of Senator Ashelle Morgan, left, Nicole John, centre, and her husband, Cornelius John at the court in Calliaqua on Friday. (iWN photos)

Government Senator Ashelle Morgan telephoned the Calliaqua Police Station at 5:20 p.m., on April 13, saying that Cornelius John was outside his wife’s house with a cutlass, a police officer told the Morgan/Nelson trial on Nov. 15.

Corporal 544 Kenrick Scarborough took to the stand and was affirmed at 2:02 p.m., Day 4 of the trail, which took place in Calliaqua.

Scarborough told Bertie Pompey’s Mesopotamia Magistrate’s Court that on April 13, he was the station officer at the Calliaqua Police Station for the noon to 6 p.m. period.

iWitness News can now report on the evidence of the case as the court had barred the media from doing so during the trial.

“On that day, while on duty, I received a telephone call from a female person. She stated her name as Senator Morgan. She stated that she had a friend by the name of Michelle John, of Diamond, who is staying at a house in Diamond and her (Mrs. John’s) husband goes by the name of Mr. Cornie John of the same address. She said he is annoyed because she (Mrs. John) was helping her (Morgan) throughout the day and he doesn’t want her to leave the house,” Scarborough reported Morgan as telling him.

“She also stated that Mr. John is standing at her gate with a cutlass making some threatening remarks as to if Ms John leaves the house what he would do and she is, therefore, seeking the police assistance. What I did, I entertained the report, and informed Ms Morgan that the police would be there as soon as the transport is available — which was presently on duty. I made an entry in the station diary as to what was reported to me by Ms Morgan. About 5:20 p.m. on that said day with reference to diary No. 41 of April 13th, 2021.”

Morgan and Assistant Director of Public Prosecution, Karim Nelson were being tried in connection with the April 13 shooting of John at his Diamond Estate home.

Nelson, an assistant director of public prosecution, was being tried on charges that on April 13, at Diamond, he wounded John and unlawfully discharged a firearm at him.

He was charged along with Morgan, a lawyer, government senator and deputy speaker of the House of Assembly, who was being tried for assaulting John.

Scarborough told the court that he informed Sergeant 729 Prescott of the report and Prescott, along with other officers, later responded to the report using his private motor vehicle.

Scarborough said he would be able to identify the note he made in the diary by his signature, telling the court that the note is in his handwriting.

The defence did not object to an application to show the officer the station diary and he identified it by his handwriting and signature and the entry was entered into evidence.

Daniel asked Scarborough if he was now aware that the person about whom Morgan had filed the report was actually “Nicole John”.

The prosecutor, S. Stephen Brette, who is deputy director of public prosecution in St. Lucia and was retained to prosecute the case, objected.

“What kind of question is that, your honour?” Brette said. “He has not set any foundation or basis for asking the witness that.”

The magistrate, however, said that the question was not unfair.

Scarborough said he was not aware that it was a Nicole John and not a Michelle John.

The officer told the court that he could not give an “exact time” of how much time elapsed between when the report was received and entered into the station diary.

“… but I made it soon after,” Scarborough said.

The officer said he only knew that Morgan made one call to the station, and that was the one that he received.

Daniel asked Scarborough if he were to produce Morgan’s phone record if the call should accord with the time he said he received that call: 5:20 p.m.

The prosecutor said that the defence could do it “another way because the document he is referring to has nothing to do with the officer”.

Brette said that the defence could not just put such a question to the witness.

“The officer is not the author,” Brette said, adding that Scarborough did not mention any document in his evidence-in-chief.

However, Daniel said that the phone record is a business record and is directly admissible in evidence.

The prosecutor, however, maintained that the document had to be entered into evidence by its author

The magistrate said that he wanted to hear the question.

Daniel then asked, “You are not in a position to dispute the fact that that call was not made at 4:57?”

The prosecutor objected again saying the offer cannot be made to refer to the document.

“It calls for speculation,” Brette said.

The magistrate permitted the question.

“You are the one who received the call and you claimed you received it at a particular time. Are you in a position to dispute that the time received that call was 4:57?” Daniel asked.

Scarborough said he was not in position to dispute

“So, when you say you made the entry shortly after, could that shortly have been 23 minutes after?” the lawyer asked.

Scarborough said he made it shortly after but could not say how long after.

Daniel asked the officer to look at the station diary and to say whether the “5” looks as if it was written over or printed over.

Daniel asked to see the document again and commented that the thickness and broadness of the stroke for the “5” is the same as the “2” and the “0”?

“It is totally different,” Scarborough said.

“So, you agree that there was a lapse of time in between when you received the call and when you entered it into the station diary?” the lawyer asked.

The lawyer put it to the corporal that there was a lapse of time in between when he received the call and when he recorded it in the diary.

The prosecutor stood up and said that Scarborough had said that already.

Daniel put it to the officer that in the lapse of time he did not even remember the first name of the person who Ms. Morgan reported to him.

“That is not true, Your Honour,” Scarborough said.

“And, I am putting it to you that is why you said the name ‘Michelle’, instead of ‘Nicole’,” Daniel said.

“That is not true, Your Honour,” Scarborough responded.

“Your memory is a bit better with time in between when you told Mr. Prescott and when he left, because you said 15 minutes,” Daniel responded.

“Was it the same 5:20 that you informed Prescott?” Daniel asked.

Scarborough said, no, telling the court that he informed Prescott about three minutes after he recorded the report.

“And Prescott left about 15 minutes after, so about 5:38 or thereabout?” Daniel asked.

“About that, Your Honour,” the officer responded.

“But, of one thing you are, thankfully, certain and you are certain that the report you entertained included Mr. John being in the road with a cutlass using threatening words,” Daniel said.

“That was stated to me,” Scarborough said.

Daniel’s cross-examination of the witness ended at 2:37 p.m., and Marks began to cross examine the officer one minute later.

Marks put it to the officer that he did not approach the report “with any sort of urgency”.

“I approach every report with urgency, based on the circumstances,” Scarborough responded.

The lawyer suggested that Scarborough had instructed Morgan to advise the person who was being treated to come to the Calliaqua Police Station.

The officer said that that was not the case.

On Nov. 18, after six days of hearing evidence, including a visit to the locus in quo, Morgan and Nelson were acquitted, one day after their lawyers made no case submissions on their behalf.

John is to be tried on a charge that on April 13, at Diamond Estate, he used threatening language to Morgan.