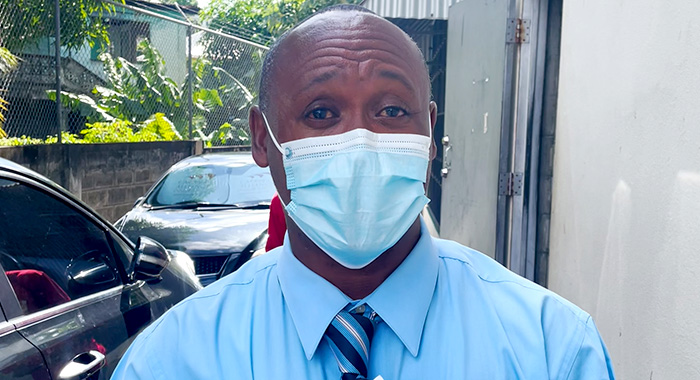 While unvaccinated police officers have been barred from duty in St. Vincent and the Grenadines, it seems that this is not the case if that duty involves testifying before the court.

Yesterday (Monday) Chair of the Police Welfare Association, Station Sergeant of Police Brenton Smith, who one week earlier told the media that he had been ordered to leave the Georgetown Police Station because he is unvaccinated against COVID-19, testified in a matter before the Serious Offences Court.

Police officers and a wide cross section of public sector workers were to be vaccinated by Nov. 19, if they are to continue in their post, unless they can obtain an exemption on religious or medical grounds.

If public sector workers for whom COVID-19 vaccination is required report for duty while unvaccinated, they would be considered to be absent and would be deemed to have forfeited their jobs and any accrued benefits after 10 days off the job.

On Monday, Smith testified in a case in which businessman Terry Baptiste, 40, of South Rivers, was tried on a charge that on June 18, 2021, at San Souci, he unlawfully discharged a loaded firearm and assaulted a 26-year-old bus conductor of Colonarie.

When Smith took the stand, he was affirmed and told the court his name and rank and that he is stationed at the Georgetown Police Station.

He then proceeded to give his evidence-in-chief.

As defence counsel Grant Connel began his cross-examination, he told the officer, “It’s good to see you. It’s after the 19th.”

Connell asked Smith for how long he has been an officer and Smith replied, “Over 27 years.”

After exiting the court, Smith told iWitness News that he is still unvaccinated but had been warned for court.

“So here I am to just give evidence in this matter and that’s why I am here.”

iWitness News asked Smith if the fact that he attended court meant that he was at work.

“I have  attended work, I will continue to attend work. This question was asked to me whether or not I would go to court. I have a responsibility to the people of  St. Vincent and the Grenadines to see that justice is being done. And whenever I am  warned for court, I will attend court because there are some matters that I still have before the court. So I will go to court and I will go to work as well.”

Smith said he will also report for duty at Georgetown Police Station today, Tuesday, although his inspector instructed him to leave last week Monday, Nov. 23, because he is unvaccinated.

He said that since then, there were  other matters and meetings “which are duty as well” that he attended to.

Smith said that those meetings were in his capacity as a station sergeant of police and chair of the Police Welfare Association.

Smith, however, said that was not an indication that he planned to get vaccinated.

“When I go back to work, I don’t know what will happen but I am going. All I want to do is to serve the people of St. Vincent and the Grenadines, to continue to serve them. So that’s why I am going back to work.”

In the Nov. 22 interview, Smith had said that he did not know if his stance on vaccination would change.

“I have always given thought to anything. I look at the changes in the science, I look  at it and then I make a determination. So far, I have not seen the changes that will propel me to be vaccinated at this stage.”

“And that is their right. That is their constitutional right. The Welfare Association has never asked persons  not to be vaccinated. We all time believe that is a choice for our officers and we will  continue to respect that choice, whether you are vaccinated or not.”