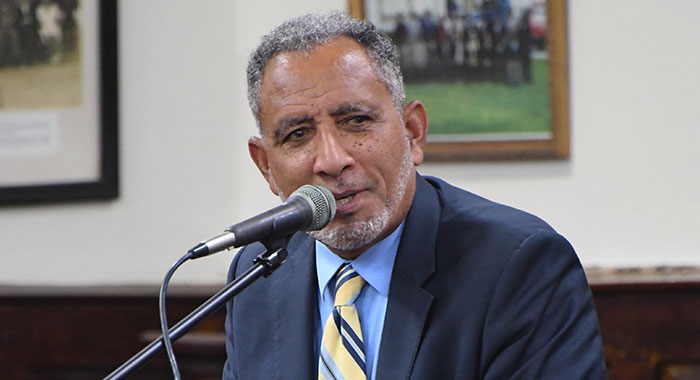 Public sector workers in St. Vincent and the Grenadines who have opted to not get vaccinated against the COVID-19 virus, even at the risk of losing their jobs and accrued benefits, have not made the decision lightly, Leader of the Opposition Godwin Friday says.

“Can you imagine that you are working for 20, 25 years and because the government says you must take a vaccine and you said no that you lose all of it? How could that possibly be rational and fair? How could that be right?” the opposition leader said on Monday on New Times, his party’s weekday show on NICE Radio.

“I mean, everybody I speak to about this, they are astounded and thinking how could anybody think this is somehow right.”

He said that his New Democratic Party will continue to stand by government employees or “anyone who is a victim of this, anyone who is fired, anyone who loses their benefits because of the vaccine mandate.

“That we must stand behind them to make sure that they are not made victims in this process of dealing with what is a once-in-a-lifetime problem that we have, that is to say, COVID-19, the pandemic…

“That is not a light decision for any of those persons to make and I have spoken to a number  of persons who have been affected,” he said of the decisions that the mandate has forced some people to make.

A law passed by the Cabinet of Ministers mandates COVID-19 vaccines for a large section of public sector workers, if they are to remain on the job beyond Nov. 19.

“And it’s a hard situation to be in, but what is worse is that this government has basically treated those people as the problem,” Friday said.

“So, you get them to vaccinate, so then what? COVID is over? We still have to deal with COVID-19 pandemic and ways in which we protect ourselves even whilst people are considering what to do about vaccination. That process has to continue going forward.

“So what are we going to do? After you are done with teachers and public servants and so on, find some other way to deal with persons who may be on Public Assistance and say they have to get it to get Public Assistance?” he  said, referring to a welfare programme under which the nation’s poorest and most vulnerable received a monthly state pay-out.

“You can’t be using these sledge hammer methods to try and force people to make decisions of conscience and decisions that affect their own bodies, There is nothing more personal than that. And that is why the more I consider it and the  more I see this callous approach that the government has adopted, the more outraged I become at it because this is not who we are in St. Vincent and the Grenadines,” Friday said.

The opposition leader got vaccinated in February and he and his party support vaccination but are opposed to the mandate.

“We are a democratic country, we are sensible people, we are rational people and when there are such important decisions to be made, these are the ones in which you engage people to make those decisions for themselves or to be a part of making those decisions you are going to impose on them…

“It is in these serious, important decisions like we have now with respect to our bodies that you cannot take that away from an individual. That is fundamentally at odds with who we are as a people. And so that is why, in principle, we in the New Democratic Party have supported that position to say that we will stand with those workers who have been victimised by  this vaccine mandate policy that is a policy that threatens or takes away their jobs, takes away their benefits.”

He said that everybody wants the pandemic to end.

“But we don’t want to do it by firing public servants, by firing teachers, so that they now pay a disproportionate cost in this battle against COVID-19. That they bear the burden of it simply because they happen to be in a position that the government has the control to affect them.

“And we had fruitful discussions about the vaccine mandate, where we reiterated our position and stated our commitment to stand with them and their members in support of the protection of their jobs and  their benefits.”

Friday said that over the last 18 months, public sector workers were called upon to go beyond the call of duty and many of them did so.

And then, now, many of them have been characterised not as workers, soldiers, if you like, in this battle against COVID, but as part of the problem. They are the problem to be dealt with because they are being made to make a choice, as they put it, between taking a vaccine and staying in their job or nat taking a vaccine and to be fired, losing all your benefits in what is essentially an arbitrary decision that this government has taken with respect to the date and the categorising of  broad sections of the public service as persons who are frontline workers.”

He said that the way in which the mandate is being executed shows great disregard for the interest of the people whose jobs are” being targeted and being made, being forced to make that decision against their own conscience and their own choices.

“Many have done so but they will not forget that here in St. Vincent and the Grenadines, there is a government, the government in office today, forced them to make this decision against their will.”

Friday said that many people have also chosen, willingly, to get vaccinated and others are working towards that decision.

“… but it has to be their own [decision]. Your body is a sanctuary for you that nobody should violate without your consent. And that is the fundamental thing here. We have learned so much about COVID over the last year and a half, as to how to be safe,  how to protect ourselves and others, and we are learning about the efficacy of vaccines and various other protocol measures necessary  to keep us safe.”